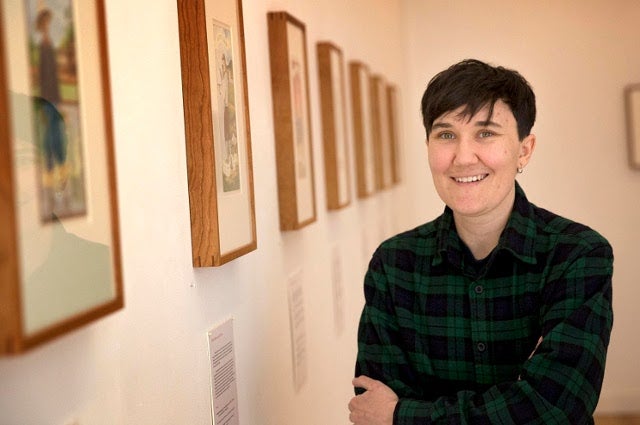 About a decade ago, artist Ria Brodell started painting a series of self-portraits. They weren’t aiming for realism, though. Rather, the portraits reflected their thinking about their very Catholic upbringing “in relationship to my gender and sexuality and coming out and coming to terms with all that,” said Brodell, a lecturer in painting and drawing at the School of the Museum of Fine Arts at Tufts.

Most were funny portraits or vignettes—Brodell engaging with this guardian angel or that patron saint. During that process, though, they remembered “this moment in high school when I pulled out a catechism book that my dad had on his shelf, and looked up the word homosexuality—and it wasn’t good.” According to instructions in the catechism, choices for such people were limited to lives of chastity or of service to the church. With that in mind, Brodell painted Self Portrait as a Nun or Monk, circa 1250.

That was a natural bridge to Brodell’s next project: portraits commemorating the lives of people across time and many cultures “assigned female at birth, who had documented relationships with women, and whose gender presentation was more masculine than feminine,” they said.

The portraits were all created in the form of the Catholic holy cards Brodell was so familiar with growing up, devotional pictures of saints meant to inspire and comfort the faithful. Across the top of each of Brodell’s portraits is the banner “Butch Heroes,” uniting the series. Like the holy cards they are modeled on, they are styled “with intense colors and all the little signifiers,” said Brodell, who received an M.F.A. from the SMFA in 2006. 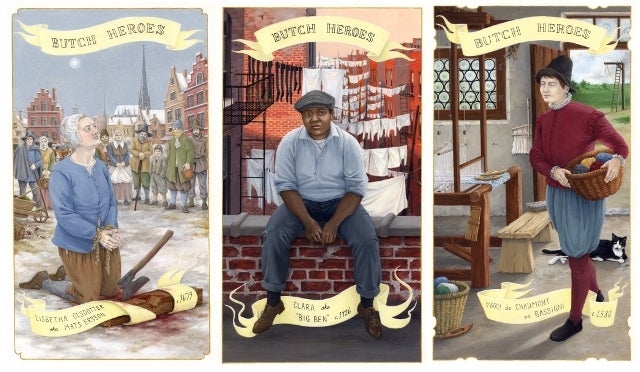 Paintings by Ria Brodell, from left: “Lisbetha Olsdotter aka Mats Ersson c. 1679 Sweden”, 2013; “Clara aka ‘Big Ben’ c. 1926 United States”, 2014; “Mary de Chaumont en Bassigni c. 1580 France”, 2015. All in the collection of the Davis Museum at Wellesley College.
Now twenty-eight of the portraits are gathered in Brodell’s new book, Butch Heroes, recently published by MIT Press. It’s a catechism of its own sort, like a church missal, in fact, complete with golden ribbon bound in as a bookmark. On the page facing each portrait, Brodell tells the history of the subject of the painting, short and touching vignettes based on often fragmentary information in the historical record.

The book hasn’t been out long, but is garnering attention. It got a short write-up in the Boston Globe, and Publishers Weekly called it “ambitious and wonderfully celebratory,” adding that “this is a serious―and seriously successful―queer history recovery project.”

The settings for the portraits are intimately tied to the lives of their subjects. Helen Oliver, who  went by the name John Oliver, was a journeyman plasterer in early nineteenth century Scotland, forced to move around as their identity was discovered. Brodell paints Oliver plastering the outside of a countryside building, using the tools of the trade from that era, smoking a cutty pipe.

Another portrays Mary East and her wife, who lived as Mr. and Mrs. James How in eighteenth century England; Brodell paints them as prosperous owners of a tavern, enmeshed in local society, beer stein in hand and kitty on the floor eating out of a bowl. 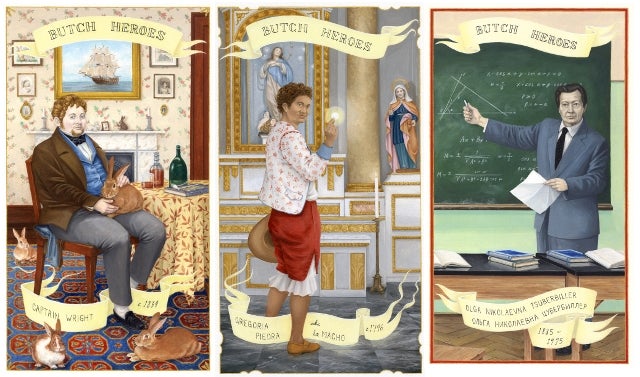 Paintings by Ria Brodell, from left: “Captain Wright c. 1834 England”, 2016, collection of the Davis Museum at Wellesley College; “Gregoria Piedra aka la Macho c. 1796 New Spain (Mexico)”, 2018; “Olga Nikolaevna Tsuberbiller 1885-1975 Russia”, 2014, collection of the Cornell Fine Arts Museum
And then there is Olga Nikolaevna Tsuberbiller, who headed the engineering mechanics department at Moscow State University of Fine Chemical Technology in the first half of the twentieth century, shown in suit and tie teaching in front of a chalkboard filled with equations.

All of the portrait subjects just wanted to live their lives as the people they knew themselves to be—even if their neighbors and communities usually wouldn’t accept them for who they were, Brodell said. They faced discrimination and far worse; the portraits include several who were killed for simply being who they were.

Still, Brodell said, “I try to look at them and try to find the positive light. I can look at some of those stories, and say, wow, they lived the way they wanted to live—I’m sure they had their hardships, but it seems like they did all right by themselves.”

Our society is still “quite constricted in our view towards gender and sexuality,” said Brodell. That said, it is changing in small measures. “I was talking to the students at the beginning of the class in September, and we all introduced ourselves with our pronouns, which is a step forward. It’s a minute change, but it’s important,” they said.

The research for the paintings took years, and Brodell is still at it. “I wanted to find specific people I could relate to,” they said. “There are tons of queer people in history, but of course, we don’t know all those stories. I wanted to narrow it down to keep it personal.”

Brodell headed to the LBGTQIA sections of libraries, chasing down academic papers and books—and more often than not finding references to their subjects hidden in the footnotes. After finding the name or story of someone who fit the bill, it was a matter of going to primary sources to track down more, such as old newspaper accounts and diaries, and with luck, finding a physical description of the person to inform the painting.

“I’d verify the story, and then I’d generally make a bullet-point list of all the key things that happened in their lives,” Brodell said. “That helped me flesh out the story.” Figuring out how to portray their heroes is key, of course. “Sometimes I want to show them working, like the plasterer—because they kept having to move every time they were discovered. Sometimes it’s like—do I want that drama at the end of their lives, or do I want to show what they stood for?”

After completing twenty-five portraits, Brodell had an exhibition in Boston, in 2017, at Gallery Kayafas in Boston. The response was “amazing—more than I would have ever anticipated,” they said. The director of the Davis Museum at Wellesley College came by—and bought fourteen of the paintings for the museum’s collection, which were on display there in the 2017-18 academic year.

The book has the first twenty-eight of the portraits; Brodell has already painted two more. “Everybody asks me if I’m going to keep going, and I wonder, is it crazy, should I stop?” Brodell said.

But they want to include people from across the globe and all walks of life. “There are certain regions of the world I’m desperately trying to find people in—I know they are there, I’ve found stories, but still haven’t attached names to those stories,” they said. “And then after that, I don’t know. I might start a project where I’m painting the unnamed people, since there are so many of them.”

A Photographer Conveys the “Emotional Experience of Being There”

SMFA Art Sale Is Back In-Person This Fall

Celebrating Black Joy Through the Arts