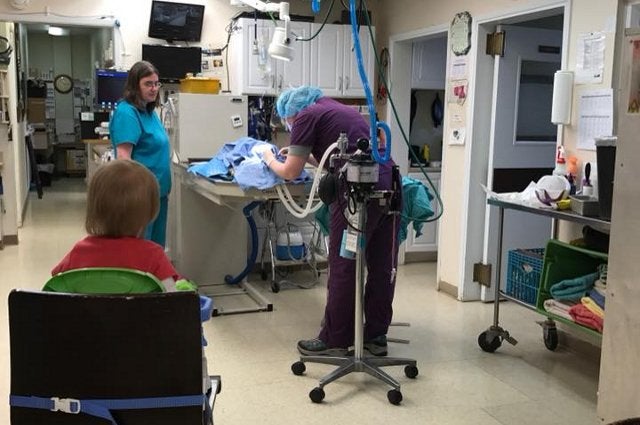 Mothers who work outside the home are already well acquainted with the stress of balancing their families’ and employers’ competing needs and expectations. Those issues are compounded by other challenges for women who are in veterinary training, said Brianna Molter, V18.

Molter knows from personal experience. She entered Cummings School as the mother of an infant and got pregnant with her second child while in her fourth year of veterinary school. So when Molter learned that Cummings School research assistant professor Marieke Rosenbaum, V14, VG14, wanted to study the state of parenting support for veterinary trainees nationwide, she volunteered to help.

Research about policies and support for pregnancy and parenting in physician training date back to 1984. But Rosenbaum, Molter, and two other Tufts scientists believe they’re the first to describe policies at U.S. veterinary schools, where approximately 80 percent of the student, intern, and resident population is made up of women in their peak reproductive years.

In two new studies, the Cummings School team found widespread challenges for veterinary trainees considering parenthood—including at Tufts, which is working to address them.

The first study, which appeared in the Journal of the American Veterinary Medical Association (JAVMA) in November, surveyed 2,088 veterinary students and 312 interns and residents across the country about how they perceived pregnancy and parenting support services available at their U.S. veterinary training institutions. For the second study, which will appear in the Journal of Veterinary Medical Education (JVME) in early 2019, the Tufts scientists surveyed administrators from thirty U.S. accredited veterinary schools on the same topics, while also reviewing their student, intern, and resident handbooks and other relevant written policies.

Most male and female veterinary trainees who were not parents said that they had intentionally delayed starting a family, with women more likely than men to see having a child as too difficult during veterinary training.

“Despite being a female-dominated field, it appears there are some pretty significant barriers to parenthood for women,” said Megan Mueller, A08, G10, G13, the Elizabeth Arnold Stevens Junior Professor and a co-author of the Cummings School studies. In the JAVMA survey, men in veterinary training were twice as likely as wom­en in veterinary training to be parents, become a parent, or report an in­tention to have children during veterinary school or a veterinary internship or residency. 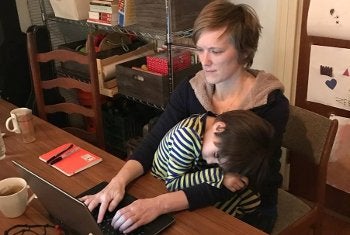 “The number of veterinary trainees that were delaying parenthood or saying it was not feasible was eye-opening,” said Marieke Rosenbaum, at work here with her son. Photo: Courtesy of Marieke Rosenbaum
The researchers hypothesize that potential parents, and especially women, may delay having children because administrative policies and support services for pregnancy and parenting at veterinary training institutions are rare. The Tufts study coming out in JVME found that few institutions have formal written parental-leave or lactation policies, and that relevant written material was accessible online for only half of the institutions that had them.

“If you are thinking about becoming pregnant and don’t want to share your plans, you can’t privately find that information,” said co-author Annie Wayne, V11, VG11, clinical assistant professor and emergency and critical care veterinarian.

The researchers said that a concerning finding was that between a third and nearly half of females in the survey who were pregnant or were thinking about becoming pregnant reported that they did not feel safe—or were unsure of their safety—while being preg­nant in their training program.

As they continue to work on collecting more data around this understudied aspect of veterinary education, the Cummings School researchers have used their findings to “effect local change,” said Wayne.

Dean ad interim Joyce Knoll and other colleagues have continued to offer support for this initiative and to grow Cummings School’s parent meet-up group, pool of faculty-parent mentors, and participation in the university’s new Parents Employee Resource Collaborative.

“If we want to attract and retain the best veterinary students, faculty and staff, we must do all that we can to allow women who want to be veterinary professionals to also raise families,” Knoll said. “Creating changes that facilitate pregnancy and parenting may also reduce the stress that arises when veterinary students and clinicians feel compelled to choose between their patients and their children.”

Rosenbaum said that parenting support matters to the profession because “there has been a lot in the news about depression within the veterinary profession—including high rates of suicide, burnout, and compassion fatigue—and research has shown the importance of strong social bonds in fighting mental illness and depression,” she said.

Although she was careful not to suggest that every veterinarian wants or needs kids, Rosenbaum noted that a 2013 study in the Australian Veterinary Journal found that having children was associated with experiencing less anxiety and depression among female veterinarians in Australia.

And despite her own initial anxiety over having a baby while in veterinary school, Rosenbaum said “if anything saved me from becoming overworked and burned out, it was that I had to engage with my child every night. I do think being a parent helps give you some balance in life that the profession could benefit from.”

Making pregnancy and parenting more normalized and doable during veterinary training wouldn’t require changing the entire culture to revolve around eight-hour days, said Rosenbaum, who noted that veterinary institutions could take some cues from medical schools. Some now offer more flexible programs, in which parents can do their course and training work part-time over eight years for the same price as the standard four-year degree. Others have installed “cry rooms” at the back of lecture halls, so parents can still attend class with infants or small children when necessary.

Rosenbaum noted that in the JVME survey, the Virginia–Maryland College of Veterinary Medicine reported that it recently overhauled its curriculum, designing the entire third year around elective coursework that could be frontloaded onto the first semester so that second semester could be taken off for parental leave. “That allows new parents to take a leave and still jump into clinic rotations so they graduate on time with their peers,” Rosenbaum explained.