Fire in Paradise: My Story

A veterinarian tells of the long, smoke-filled hours caring for animals after the harrowing fires in California 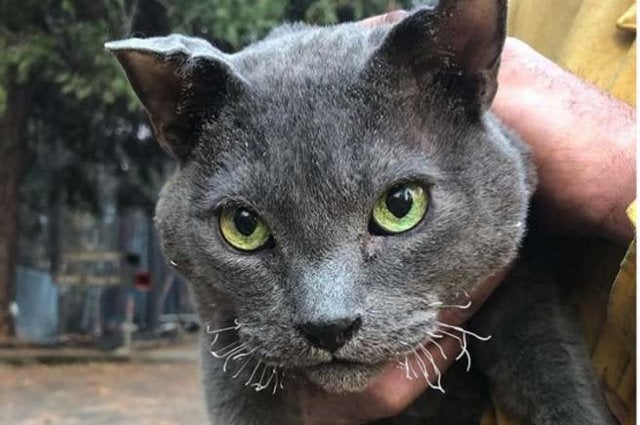 It was the night of November 17, 2018, when I left my home in Berkeley, California, and drove three hours up to the area of Paradise. In the previous nine days, the infamous Camp Fire smoke had already traveled over 170 miles to the San Francisco Bay area. More than a million people were breathing the thickened air, and I was headed near its source.

I was being deployed by the California Veterinary Medical Reserve Corps (CAVMRC), a group of veterinary volunteers who provide help during state emergencies. While driving up, I was wearing my N95 industrial face mask because I did not trust my car’s air filter. It made me look alien. I saw other drivers passing me on the highway sporting similar face masks. It was like a new world.

After arriving late at night, I started looking for the building that housed my designated cot and Red Cross blanket. I never found it. Instead, I found a veterinary technician who was still admitting burn victims at Chico Municipal Airport. She was a stranger who quickly became a friend, just like so many others I met over the following several weeks. She said that a local woman (who the tech had only met the day before) had opened up her home to any veterinary volunteer who needed a place to stay. I met this amazing woman and her husband on my third night staying at their beautiful home, and I’ll never forget their generosity.

Chico Airport was one of nine animal shelters that were manned or routinely visited by CAVMRC volunteers. It is comprised of one single terminal building (which we called “medical”) and is flanked by one administrative building (deemed “the cat sector”) and one airplane hangar (known as “aero”). Small animals and exotic animals occupied every possible room in all three buildings. This meant in one location hundreds of animals covered in fur, scales, or feathers were under CAVMRC’s care. All told, CAVMRC was responsible for 2,700 animals throughout all nine sites. 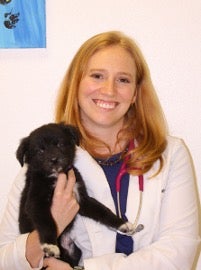 Deborah Thomson at her veterinary practice in Berkeley, California.
While working on the patients, it was easy to forget that you were at an airport until you turned your head and saw the tarmac with grounded airplanes sitting just a few feet away. At home, I worked at a hospital with sixty people on staff, but that hospital looked minuscule in comparison to this mega-shelter. Even my colleagues who were professional shelter veterinarians at the airport had never worked on such a scale. Three hundred and thirteen veterinary volunteers were deployed to assist, making Camp Fire the largest CAVMRC deployment in history.

I was assigned to be the head veterinarian in the cat sector, where I was responsible for 212 displaced and sick cats, as well as 82 exotic animals, including macaws, parakeets, finches, Amazon greys, cockatoos, cockatiels, rabbits, guinea pigs, gerbils, hamsters, rats, and a chinchilla. In addition to directly treating pets harmed by the fire and conducting physical exams on incoming pets, I oversaw up to six veterinarians and twelve veterinary technicians or assistants at a time. I also worked closely with an incredible intake volunteer as well as an amazing animal control officer.

As head veterinarian, my job was to communicate efficiently with two other head veterinarians (one in the terminal building and one in an airplane hangar building) as well as my supervisor (the field coordinator) about the needs of the animals and volunteers in my sector. My primary objective was to prevent any infectious disease from spreading, keep the stress level as low as possible among the animals (and volunteers), and to get any concerning patients more advanced care, which might include sending them out to a twenty-four-hour veterinary hospital.

If a cat developed signs of an upper respiratory infection (URI), I had to inform the owner (if found) and then shuttle the cat over to the URI-quarantined area located on the other side of the airport. When I found burns on a cat’s paws, I contacted the head veterinarian in the medical sector and made sure they had space and equipment prepared to accept that cat right away. I also needed to be aware of housemates in separate cages (and buildings) and, if one animal needed to be moved, I made sure that its housemate followed.

In order to keep such a chaotic environment as organized as possible, I held rounds every two hours for all the cat-sector veterinary volunteers. That way, I could stay abreast to medical concerns and rearrange the allocation of volunteers whenever one area of the sector required extra manpower.

After approximately three weeks, all animals were moved from Chico airport to various other locations. One makeshift shelter took over unused municipal buildings in Oroville, and was one of the original nine CAVMRC sites. Ultimately, hundreds of Chico airport animals arrived in Oroville, and this is where I continued volunteering.

Each day, I saw people come into the shelter to find their pets. Sometimes they found them. Sometimes they did not. I overheard one animal control officer advise a group of disappointed Paradise residents that they should leave freshly worn clothing at their (burned out) properties so their pets might pick up their scent.

One day, I met a woman who had evidently been through chemotherapy. She told me that, despite her neighbor’s warnings, she returned to her trailer as the flames were approaching. She returned to save her rabbits and parakeets. Fortunately, they all survived. However, her home and all of her worldly possessions have been incinerated. She told me that she lives for these animals.

As you can imagine, this is an event that changes lives. I know it has changed mine. I have seen so much: from people opening up their homes to faraway strangers, to children writing encouraging posters, to volunteers driving twelve hours in a day to work a ten-hour shift, to people finding their beloved yet slightly worn-out pets. I’ve seen tears of sadness and tears of joy.

While everybody who has breathed in the thickened air has their own story, my seventy-plus hours of volunteering have been a reminder that veterinarians, technicians, and assistants are powerful forces for good. We have the ability to improve both the health of animals and the well-being of their owners. And in Paradise, where they don’t have much left, at least they have each other.

Dr. Deborah Thomson is the 2019-2020 AVMA Congressional Science and Engineering Policy Fellow. Previously, she was predominantly a small-animal clinician as well as a One Health educator in public schools around the San Francisco Bay area. She graduated from Cummings School of Veterinary Medicine in 2012 with a D.V.M. degree as well as a Certificate in International Veterinary Medicine. In 2018, Thomson continued to volunteer with CAVMRC to care for animal victims of the Camp Fire through the new year. Since then, she has been promoted to Field Coordinator for future California disasters (she will return to helping the ground efforts after her position in Washington, DC, ends).