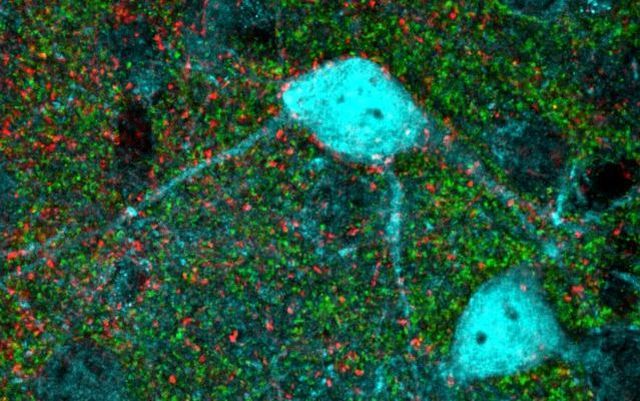 BOSTON (Jan. 8, 2019)—Neuroscientists at Tufts University School of Medicine, in collaboration with colleagues at Yale University School of Medicine, have discovered a new molecular mechanism that is essential for maturation of brain function and may be used to restore plasticity in aged brains. Unlike previous research that broadly manipulated brain plasticity using approaches that affected the entire brain, this study targets for the first time a specific molecule acting on a single type of neuronal connection to modulate brain function. This restores the brain’s ability to rewire itself.

The research in mice could advance understanding and treatment of human diseases such as autism spectrum disorders and stroke. It is published in Cell Reports on January 8, 2019.

The human brain is very plastic during childhood, and all young mammals have a “critical period” when different areas of their brains can remodel neural connections in response to external stimuli. Disruption of this precise developmental sequence results in serious damage; conditions such as autism potentially involve disrupted critical periods.

“It’s been known for a while that maturation of inhibitory nerve cells in the brain controls the onset of critical period plasticity, but how this plasticity wanes as the brain matures is not understood,” said Adema Ribic, Ph.D., research scientist at Tufts School of Medicine and first author of the new study. “We’ve had some evidence that a set of molecules called SynCAMs may be involved in this process, so we decided to dig deeper into those specific molecules.”

The study focused on the visual cortex, the part of the brain responsible for processing visual scenes, in which plasticity has been examined in many species. Using advanced viral tools and electrophysiological techniques, the researchers were able to measure activity of nerve cells (neurons) in awake mice freely responding to visual stimuli. They found that removal of the SynCAM 1 molecule from the brain increased plasticity in the visual cortex of both young and adult mice. Further research found that SynCAM 1 controls a very specific type of neuronal connection termed synapses: the long-distance synapses (red dots in photo above) between the visual thalamus, located beneath the cerebral cortex, and inhibitory neurons in the cortex. SynCAM 1 was found to be necessary for the formation of synapses between thalamus and inhibitory neurons, which in turn helps inhibitory neurons to mature and actively restrict critical period plasticity.

Ribic likens inhibitory neurons to a dial controlling when brain plasticity can occur. Plasticity is needed during early development, as the function of different brain areas matures. Mature function is then ‘cemented’ into place by molecules like SynCAM 1.

“Our study identified a fundamental mechanism that controls brain plasticity, and perhaps most exciting, we can show that a process in the adult brain actively suppresses plasticity,” said study senior author Thomas Biederer, Ph.D., associate professor of neuroscience at Tufts School of Medicine and a member of the neuroscience program faculty at the Sackler School of Graduate Biomedical Sciences at Tufts. “Therefore, the limited ability of the mature brain to change is not simply a consequence of age but is directly enforced by the SynCAM 1 mechanism. This allows us to target the mechanism to re-open plasticity in the mature brain, which could be relevant for treating disorders like autism.”

Focusing on a single molecule and synapse type to induce the heightened plasticity should support development of treatments with reduced potential for side effects.  “For example, antidepressants may restore plasticity but will also have a lot of other effects,” said Ribic, who noted that more plasticity isn’t always better. “Our study found a way to increase plasticity in a very controlled way, both spatially and temporally. Combined with the latest approaches in genetic manipulation, this may prove to be a new path to tackle both childhood disorders and brain injury in adults.”

The researchers still need to determine if this plasticity mechanism will work in humans as well as mice and can be activated repeatedly. While there are obviously major differences between rodents and humans, studies in multiple species suggest that the general mechanisms of plasticity are similar.

The study is the latest work from the Biederer group at Tufts University School of Medicine, which focuses on mechanisms of synapse formation and plasticity in the context of normal development and neurodevelopmental disorders.

Sharing paper authorship was Michael C. Crair, professor of neuroscience at Yale University School of Medicine, and a long-term collaborator with Ribic and Biederer.

This content is solely the responsibility of the authors and does not necessarily represent the official views of the National Institutes of Health or other funders.