Black male academies—charters and public schools—are a growing trend, but are they a good idea? A Tufts professor examines the issue 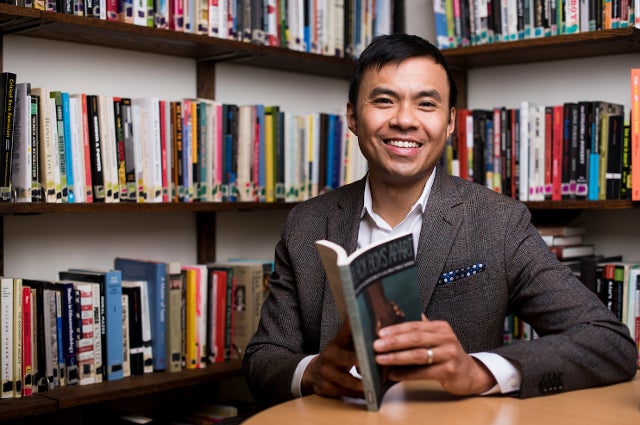 In a large city on the East Coast, two different approaches to education for young black male students seem to offer distinct choices for the future: one a charter school modeled on elite private schools, complete with students in jackets and ties taking Latin, and the other a public school, trying to distinguish itself by focusing solely on this particular student body.

Freeden Blume Oeur, an associate professor of sociology, spent a year studying both schools, and reports his findings in a new book, Black Boys Apart: Racial Uplift and Respectability in All-Male Public Schools (University of Minnesota Press). Perry High School and Northside Academy in the city of Morgan—all names are pseudonyms—were both supposed to be solutions to the problem that the schools and society were failing young black males.

Blume Oeur is skeptical that they are the right answer, though. “Black male academies are less a ‘school reform’ effort and more a poignant example of the continual institutional efforts to reform young Black men during periods of stark inequality,” he writes. They are also “a strange mix of democratic empowerment and privatization, segregation and separation, strict discipline and love.”

Tufts Now reached out to Blume Oeur to learn more about the experiments in schooling and what they mean for larger American society.

Tufts Now: What inspired you to do the field work to study all-male black high schools that became your book, Black Boys Apart?

Freeden Blume Oeur: I had previously taught sixth grade in a low-income, all-black middle school. That experience motivated me to study how histories and processes of racial and social class segregation restrict opportunities for black youth. In graduate school, I became more interested in how communities and schools separate kids by gender, voluntarily and involuntarily. This opened my eyes to how separating schoolchildren by race and by gender has always gone hand in hand in public schooling in the U.S., often in disturbing ways. I was therefore eager to pursue the resurgence of sex-separate schooling for black boys as a research study.

Can you describe what motivated the creation of all-male black schools at Northside and Perry? 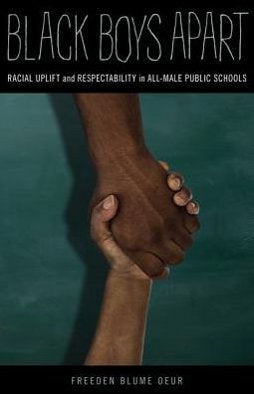 With the passage of No Child Left Behind nationally and an upheaval in the school district in Morgan, there was more support for school reformers to experiment to find purportedly new ways of addressing the needs of black boys. This nurtured relationships between black school reformers and for-profit educational organizations and wealthy donors. So while the community control tradition is fundamentally democratic, history shows that black communities have often used market incentives to their advantage.

Perry, the public school, was shuttered in the end—why did it fail and Northside not just succeed, but look to expand?

Despite the good intentions and hard work of many, Perry High was the victim of several factors: conflicts between administrators and teachers, a lack of full buy-in by some of the staff, a stubborn reputation as a “bad” school, and misguided priorities by the school district. As a charter school, Northside officials had more power to operate the school as they wished. So they could hire staff who bought into the all-boys model. The school also had a much bigger operating budget and more resources.

An important recipe for success was its identity as a “respectable” school. Respectability gave the school legitimacy and it won over many people in the community. It had a classical curriculum and the students were impeccably dressed in coats and ties. The school sought to shape the habits, minds, and character of its students in a manner similar to elite private schools.

Teaching in these schools often focused on resilience and respectability—are those approaches useful?

In recent years, curricula focused around “soft skills” have become popular in schools serving disadvantaged youth. Lessons built on “grit” and “resilience” generally try to teach youth to persevere, to have higher self-esteem and more willpower, and to be more optimistic.

My book is wary of efforts like these to change the character of black youth. They’re not innovative—a trendy term in school reform today—but instead revise old notions of black respectability: bootstrapping narratives that demand that black people change their character and their ways if they want to succeed.

But this lets discriminatory institutions and unjust policies off the hook. And there’s also something insulting about telling youth living in disadvantaged communities that they need to have more willpower.

For these reasons, I show that schools are not so much “school reform” efforts but instead efforts to reform black male character and identity. In today’s competitive marketplace of public schools, schools need to establish legitimacy. Instead of being innovative, they’re risk-averse, and respectability is an easy sell to families and the larger community. My book therefore situates black male academies in two intersecting historical currents: the intensification of respectability politics and neoliberal ideologies, which together divide communities and make success and failure a matter of individual choices.

Segregating students by race and gender seems to be a throwback—has there been much pushback in the African American community about these types of schools?

Opinions are divided. These schools have many supporters: liberal and conservative, black and non-black. One important tradition—Black Nationalism—has supported these schools under the banner of greater black self-determination in schooling. These schools should be operated by and for blacks. The first attempts thirty years ago to open all-boys public schools were also among the first schools to embrace Afrocentric curricula.

When these schools faced legal challenges from organizations like the ACLU, the local community viewed it as an unwarranted attack from the outside. Meanwhile, black feminists have been critical of these schools—and Black Nationalism more generally—for prioritizing black boys in their uplift narratives, for their chauvinism, and for propping up a “black male crisis” narrative when, in fact, black girls face equally significant obstacles in schools and their communities.

After doing the research and writing the book, what is your take on these efforts to establish separate black male high schools?

The book doesn’t claim to draw conclusions about all black male academies nationwide. Instead, it situates black male academies in the interplay of historical, democratic, and market forces and asks what this unique case study can tell us more generally about black male identity and character today.

It’s crucial that we situate these schools in a larger neoliberal context that’s splintering black communities, by encouraging, as I saw it, an unhealthy amount of competition among students, families, and schools. This process elevates higher-achieving, respectable schoolboys and further marginalizes their more at-risk peers.

However, some newer black male academies are doing promising work. Ron Brown Prep in Washington, D.C., for instance, uses a restorative justice model to handle student violations. This matters because black youth are unfairly and disproportionately targeted for punishment in schools.

Probably the biggest problem facing blacks is historically institutionalized racism in America. Are these schools able to do anything to combat that? And if not, how are they helping their students?

Both schools in my book provided space for their students to talk about serious challenges facing young black men today: police brutality, mass incarceration, the lure of drugs and gangs, a racially discriminatory job market. I think it’s important for youth to have these conversations with caring adults.

While I’m skeptical of these schools, I think they can learn much from a history of collective resilience in black freedom struggles, and should draw inspiration from movements like Black Lives Matter, which promotes an anti-respectability politics. And these schools aren’t fully to blame. They’re full of hardworking and committed staff members who found their students coming of age in an era marked by reprehensible “law and order” policies, state disinvestment in public institutions, and school district regulations that promote ruthless competition when what’s needed is greater collaboration and collective forms of caring.