Guest Contributor without an External Profile

Ellise LaMotte, new director of the Center for STEM Diversity, aims to help even more underrepresented students achieve success in those fields 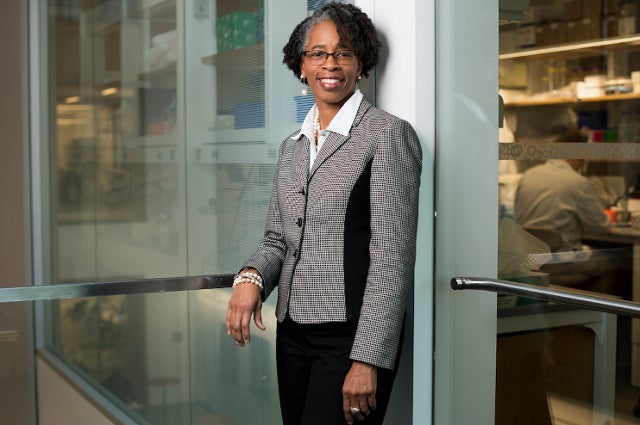 Soon after Ellise LaMotte arrived this spring as the new director of the Center for STEM Diversity, she went with Tufts student STEM Ambassadors to Somerville High School and a bilingual classroom to deliver interactive presentations and creative hands-on activities.

While there, Chris Camacho, E20, a STEM Ambassador majoring in computer science, “presented with his STEM Ambassador partner, and then it was experiment time,” LaMotte said. “There was one student over in a corner, kind of by himself, not participating, and Chris went over and started to speak to him in Spanish. His face lit up—that was all it took. Now this high school student was engaged—all because Chris took the time to take an interest in him.”

That affirmed what LaMotte has long known herself: personal attention and concern are vital communication tools for encouraging underrepresented students to aspire to—and achieve—careers in fields that they may never have thought possible.

That is why, from her perspective, the Center for STEM Diversity, which supports undergraduates from underrepresented backgrounds pursuing studies in sciences, technology, engineering, and math, is foremost “a place where a student can feel at home,” she said.

“I hope that students will at any time seek and find support, in almost every meaning of that word,” she said. “If we can’t supply it one-on-one, we can recommend who they should see. We never assume that a seventeen-year-old knows how to navigate college or handle the pressures of exams, finding internships, or their first time being away from family.”

That theme of support is braided throughout all the center’s efforts to build meaningful student participation in science and engineering, specifically for traditionally underrepresented groups including women, African Americans, Native Americans, the LGBTQ community, and those who identify as Hispanic and/or Latinx. Students who seek out the center are also often first-generation college students.

The center has grown significantly since it was founded in 2008. Its tenth anniversary celebration on December 12 was a moment to mark that progress, said LaMotte, but also a time to look forward: staff retreats have already generated ideas informing the center’s five-year strategic plan. “We’re still in our formative years,” said LaMotte, who came to Tufts from Olin College of Engineering, where she was director of academic services. 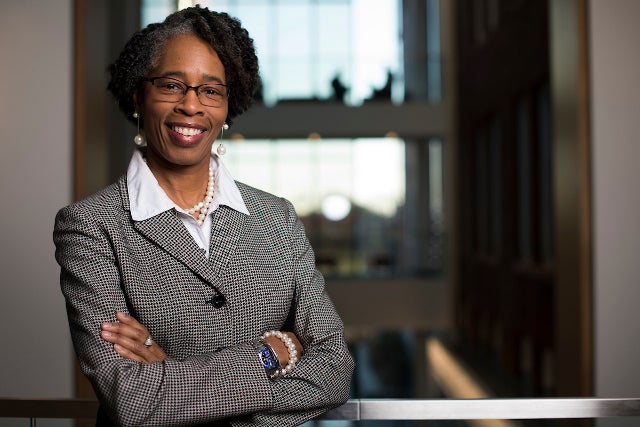 “Not many institutions have made the commitment of resources and people to make a center like this,” Ellise LaMotte said. “It’s one of the reasons I wanted to come here.” Photo: Alonso Nichols
Efforts to increase diversity in STEM fields have made progress in recent decades, a trend directly linked with productivity and innovation. “Diversity is both a resource for and strength of our society and economy,” according to Expanding Underrepresented Minority Participation: America’s Science and Technology Talent at the Crossroads, a report by the National Academies of Science, Engineering, and Medicine from 2011. Diverse groups, it said, “are typically smarter and stronger than homogenous groups when innovation is a critical goal, as it is now in our globally competitive environment.”

The Center for STEM Diversity and its staff are rising to meet those challenges as the flagship for five programs, four focused on undergraduates and one on graduate students. The Center programs include Bridge to Engineering Success at Tufts (BEST), a six-week summer program with the goal to build a strong cohort of engineers who will support and encourage each other through graduation and beyond, and Redefining the Image of Science and Engineering (RISE), which supports first-year undergraduates by providing advising opportunities and through the creation of programming focused on campus support, resume building, networking, leadership development, and career counseling.

A third program, STEM Ambassadors, co-supported by the Center for STEM Diversity and the Jonathan M. Tisch College of Civic Life, aims to change the conversation on science and engineering in local middle and high schools. STEM Ambassadors, who all identify as first-generation college students, are trained in social justice, leadership, teamwork, and public speaking. At local high schools, the volunteers give presentations on science and engineering topics, lead hands-on activities, and answer questions about attending college.

LaMotte is aided in these efforts by Campbell Halligan, program administrator and resource advisor for the BEST program, and Courtney Russo, a program coordinator who manages the STEM Ambassador program.

LaMotte takes a personal interest in seeing diversity and inclusion thrive at Tufts. She grew up in Jamaica, a neighborhood in Queens, New York; her mother worked first in fashion, then insurance; her father was a skycap for Pan American Airlines. “They both worked hard to make sure that my brother and I could go to college,” she said. “So that was always my little inner drive.”

LaMotte went on to pursue electrical engineering technology at Northeastern University, but as one of only a handful of African-American women in the program, she didn’t exactly feel understood or supported—and her confidence suffered. “It was not fun,” she recalled. “I thought, ‘I don’t belong here. I’m not smart enough.’”

Persistence, she said, came by way of simply “being stubborn,” she said with a laugh. “But really, my mother and father worked so that my brother and I could get an education. Failure was not an option. I had people telling me that I could not succeed, and that was a motivator. My mantra was: ‘I will show you.’ And I had other black women in a sorority for black women— Sigma Beta Epsilon—who were my mentors. I thought, OK, it’s hard for me, but I can do this, too.”

LaMotte was five years into a job in corporate telecommunications when she went back to school to earn an M.B.A. at Northeastern through a mid-career program. “I knew if I wanted to get promoted, I would need an advanced degree,” she said. “So my Saturdays were gone for two years—I was in class every other Friday and every Saturday.”

But after nearly two decades in corporate technology, she found rewarding new challenges in the nonprofit sector, working as director of the Women of Ethnic Diversity Initiative for the Commonwealth Institute and as director for operations at Babson College’s F.W. Olin Graduate School of Business.

She also completed a doctorate in education and higher education administration at the University of Massachusetts, Boston; her dissertation focused on the experience of the African-American woman in engineering programs “as they persisted to degree completion.” For it she interviewed sixteen women from five predominantly white institutions, “just to get a sense of their experience,” she said.

While in her doctoral program, LaMotte came to several realizations about her college experience. “Everything I read led me to realize—‘Wait a minute, my experiences all have words and meaning: the microaggressions, the stereotype threat, the imposter syndrome. But it’s not you. It’s systemic,’” she recalled thinking. That realization, she said, was cathartic, and she knew she’d found her calling. “My next step was, “OK, great. I want to land in a place where I could help underrepresented populations in the STEM field.”

That “dream job” is the one she found at Tufts. “Not many institutions have made the commitment of resources and people to make a center like this,” she said. “It’s one of the reasons I wanted to come here.”

Looking ahead, she has identified areas where she’d like to focus those resources. “We’re not reaching enough students,” she said. “I want to get our name out there across the campus. We’re pretty much entrenched on the engineering side, but on the arts and sciences side, we could do more to get out the word that we’re here.”

The center’s move from the School of Engineering to 20 Professors Row, home of the Office of Student Success and Advising and Residential Life, is already helping raise the center’s profile. “We have greater visibility,” LaMotte said, “and that’s helping more students in the sciences and mathematics see us as a resource. Along with my colleagues Campbell Halligan and Courtney Russo, I look forward to supporting more underrepresented students, so they too can feel they have a welcoming place in the center.”