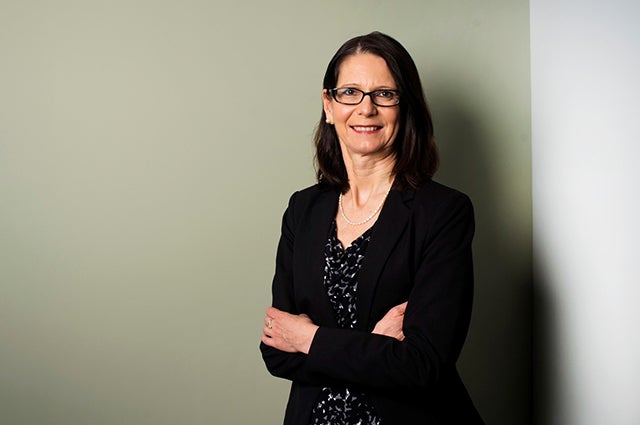 Nadine Aubry, Ph.D., who leads Northeastern University’s College of Engineering and is an internationally recognized scholar and academic innovator, will be Tufts University’s next provost and senior vice president, effective July 1, 2019, the university announced today.

A University Distinguished Professor at Northeastern with three decades of experience in higher education, Aubry has served as dean of the university’s College of Engineering since 2012.

“Dr. Aubry has a demonstrated track record of successful and innovative academic leadership in complex organizations, as well as an outstanding personal record of research and service. She shares our commitment to our mission of being a leading student-centered research university and to our values of civic engagement and greater access to higher education. I cannot imagine a better qualified candidate to serve as the university’s next chief academic officer,” said Tufts President Anthony P. Monaco.

“I am deeply honored and extremely excited to be named the next provost of Tufts, a premier university with superb students, prominent faculty, dedicated staff, and accomplished alumni,” said Aubry. “With strengths in a broad range of subjects including fine arts, humanities, social sciences, engineering, science, and medicine­—­all joined by a common thread of academic excellence, interdisciplinary collaboration, and a mission of societal impact—Tufts is uniquely positioned to make a powerful impact in the world.”

“I very much look forward to helping lead the Tufts community in educating the next generation of caring, successful, and diverse citizens; addressing and solving the grand challenges of our time through groundbreaking convergent research; and driving innovation that enables Tufts to reach its highest aspirations,” Aubry added.

Aubry has been a successful academic leader and influential researcher both at Northeastern and at Carnegie Mellon University, where she was head of the Department of Mechanical Engineering, Raymond J. Lane Distinguished Professor, and University Professor. At both institutions, she has demonstrated an ability to build innovative academic programs, grow research, enhance academic quality, generate new resources, and create interdisciplinary programs bridging disparate areas of study. She launched a number of new initiatives at Northeastern, including the College of Engineering Diversity and Inclusion Council, that helped spur notable increases in the enrollment of women and underrepresented minority students.

At Northeastern and Carnegie Mellon, she also generated new resources by growing research funding and philanthropic gifts, and increased enrollments by creating interdisciplinary programs in emerging areas of interest.

“Nadine is truly a world-class scholar, and a highly regarded leader in the theoretical and applied mechanics community around the world. Her groundbreaking work on open flow turbulence and other complex flows represents fundamental contributions to the permanent literature in fluid dynamics, a field widely used in many engineering applications,” said Jianmin Qu, dean of Tufts’ School of Engineering. “I am immensely proud that Tufts is able to attract such a talented scholar and innovative academic leader.”

A native of France who is now a dual citizen, Aubry holds a Diplôme d’Ingénieur from Institut National Polytechnique Grenoble and a Diplôme d’Etudes Approfondies from Université Grenoble Alpes, both in mechanical engineering, and received a Ph.D. in mechanical and aerospace engineering from Cornell University in 1987.

Aubry has held leadership positions in a number of organizations, including chair of the National Academies’ U.S. National Committee on Theoretical and Applied Mechanics and the American Physical Society’s Division of Fluid Dynamics, governing board member of the National Academy of Engineering Council, and president of the International Union of Theoretical and Applied Mechanics. She has served on numerous advisory and review boards in the United States and in foreign countries.

Aubry and her husband, John, have three adult children, two daughters and a son.