Focusing on the Humanities

Humanistic inquiry can play a critical role in helping society, says Kamran Rastegar, new director of the Center for the Humanities at Tufts 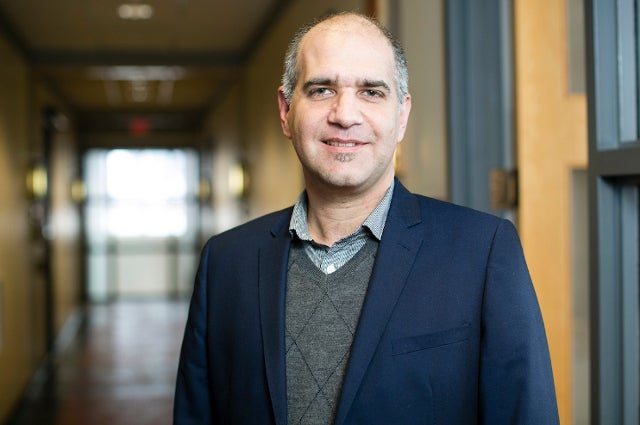 Rastegar grew up in Iran, and came to the U.S. with his family when he was in middle school. At Hampshire College, he began studying Arabic, and studied abroad in Cairo. He went on to earn a Ph.D. at Columbia University in comparative literature and Middle Eastern and Asian languages and cultures, taught at Brown and the University of Edinburgh, and came to Tufts in 2009. His has written two books: Literary Modernity Between the Middle East and Europe (Routledge, 2007) and Surviving Images: Cinema, War and Cultural Memory in the Middle East (Oxford, 2015).

Rastegar studies the “literary contact points between Arabic and Persian literatures and their relationships with English—and to a lesser extent, French—literatures,” he said. He also focuses on the intersection of cultural memory with visual arts, and in particular cinema. His book Surviving Images traced the way films have affected the development of cultural memory of war and social violence, using historical settings in the Middle East as case studies.

At Tufts, he teaches a variety of courses on modern Arabic and Persian literature, on the cultural history of the Middle East, on cinema in the Middle East, and on colonial and postcolonial studies.

Tufts Now recently caught up with Rastegar to talk about CHAT and his plans to strengthen its position as an “incubator that promotes excellence in humanities research at Tufts.”

Tufts Now: What do you see as the role for the Center for the Humanities at Tufts?

Kamran Rastagar: I had been a fellow of the center in 2013-14 and found the opportunity to work and share ideas with other fellows stimulating. In the two years after that, I collaborated with my colleagues Lisa Lowe and Kris Manjapra on projects that led to the establishment of a program in Colonialism Studies, and then in 2016-17 we successfully applied for funding from the Mellon Foundation for a Sawyer Seminar. In that year, Lisa Lowe also took on the directorship of the Center for the Humanities, and I worked with her and Kris on the Mellon seminar, which brought a series of distinguished visitors to campus, as well as organizing a faculty seminar under the heading of “Comparative Global Humanities.”

Now in my role as director of the center, I draw upon these experiences in thinking about how the center may best serve as a research incubator that promotes excellence in humanities research at Tufts. In this sense, I hope that the center will continue to support humanities faculty at all stages of their careers in various ways, but in particular by forming a community within which collaborative work and cross-pollination across disciplines and fields can be fostered.

What are some of the ways humanities faculty collaborate?

The center hosts its own faculty seminar group, which includes our resident faculty fellows, postdocs, and graduate fellows, as well as other colleagues who are able and willing to commit to the seminar for a semester or the year. The seminar has taken different forms—from serving as a reading and discussion group, with a syllabus of current or seminal articles and books that we discuss, to this year’s group, which is experimenting more as a collaborative workshop, where works in progress are shared and where we explore new techniques and strategies for productivity and innovation as a group.

This year we are very fortunate to have a grant thanks to the Office of the Vice Provost for Research—and the Brighter World Through Research and Scholarship initiative—to expand the scope of this work, with a longer, three-year program, bringing together a group of humanities faculty and identifying mechanisms to work collaboratively in giving depth and breadth to certain areas of research at Tufts. We call the initiative “Culture, History, and Translation,” which I am co-leading along with my colleague Kendra Field, director of the Center for the Study of Race and Democracy.

With undergraduates often focused on jobs after graduation, what are some of the ways that studying the humanities is enriching to both their careers and their lives?

The role of the humanities remains central to any notion of a rigorous liberal arts education, and the urgency of this seems even greater today than at any time in the recent past. We are increasingly confronted with challenging questions that relate to the ability of different groups and societies to live together justly and in equality, as well as to think in ways that are innovative and dynamic enough to find solutions to rising social crises. These questions cannot be addressed without forms of knowledge that can only be found through humanistic inquiry—important thinking about ethics, culture, history, and idealizing our possible futures, which are crucial for our students to encounter as they prepare for their lives after Tufts.

What are your plans for CHAT for this academic year?

I aim to build upon our recent successes in shaping the center to be an incubator for active and collaborative scholarship that brings together faculty who are exploring some of the critical questions of our day.

This fall we had distinguished guests ranging from Nicholas Mirzoeff, a seminal figure in the development of visual culture as a scholarly field, to Tarek El-Ariss, whose new work explores how new digital culture and media are reshaping cultural life in the Arab world. In addition we featured the work of groundbreaking Tufts faculty such as hosting a book talk by Professor Susan Napier of International Literary and Cultural Studies at Tufts, whose new book Miyazakiworld is set to be the defining critical biography of Hayao Miyazaki, the world famous Japanese film animator and director.

In addition, the center co-sponsored a series of three panel discussions titled “Envisioning Interdisciplinarity in Today’s University,” which sought to generate an important discussion at Tufts regarding the nature of interdisciplinary work, especially in or involving the humanities, and how interdisciplinary scholarship can serve to address the pressing questions of our time.

CHAT has several postdoctoral fellows—what will they be working on this year?

We have two fellows this year, Hossein Ayazi and Sumayya Kassamali. They are both brilliant and absolutely innovative young scholars. Ayazi comes to us from UC Berkeley, where he recently completed a Ph.D. that brings together environmental studies, ethnic and race studies, and American studies. His research traces the history of U.S.-led international capital-intensive agricultural research technology and education transfer initiatives that were designed to combat hunger and contain civil unrest during the early Cold War—later named the “Green Revolution”—and argues that these projects innovated upon early-twentieth century U.S. settler colonial and anti-black forms of subjection administration and governance.

Kassamali’s dissertation, completed at Columbia University, is a study of the lives of female domestic workers in Lebanon, who are primarily of South and Southeast Asian or East African origin. Kassamali’s work attends to the presence and growth of a clandestine community of these women who have escaped their employers and have effectively entered into Lebanese society—in many cases through partnership or marriage with displaced Syrian or Kurdish men living in Lebanon as a consequence of the wars in their homelands. She explores the broader global economic forces that have produced the marketplace for these women’s labor, and then moves to the local dimension to understand how their (mis)treatment within Lebanon is tolerated at the level of the employing family as well as by state institutions. By shining a light on these marginalized communities in Beirut, her work raises profound questions regarding evolving forms of community, belonging, and identity.