Laurie Baise, professor and department chair, said the program builds on the School of Engineering’s connections with the nation’s nascent offshore wind power industry. Today about 6 percent of the nation’s electricity is supplied by wind energy, but the U.S. Department of Energy envisions the nation generating 20 percent of its energy by wind by 2030.

“This program is an opportunity to take the lead in shaping a sustainable solution to fossil fuels,” said Baise. “Tufts is well positioned to meet that demand by offering a robust and focused program that meets the needs of industry leaders.”

Program director Eric Hines, a professor of the practice in civil engineering, served as a partner at LeMessurier Consultants prior to joining Tufts full-time to advocate for the advancement of offshore wind energy research and education. “Critical to this enterprise are the integration of engineering with policy and economics, and successful partnerships between universities, industry, and government,” he said.

An advisor to the industry for more than a decade, he has led the design and construction of some of its key infrastructure, and has introduced Tufts students to real-world engineering challenges with visits to sites such as the Wind Technology Testing Center in Charlestown, the largest facility in North America for testing wind turbine blades, and the New Bedford Marine Commerce Terminal, North America’s first offshore wind logistics port.

“If wind power is to continue its growth as an energy source, we need not only research and development, but also programs that educate a generation of engineers who are devoted to sustainable development and energy independence,” he said. “This is a first step toward making climate and energy sustainability a priority.”

The new master’s program comes as offshore wind energy is starting to receive large-scale investments. In December, the federal government leased development rights to establish wind farms off the coast of Massachusetts for a record $405 million. Commercial-scale construction will begin this year on a similar-sized Massachusetts lease area sold in 2015 for under $300,000. “The increase in lease area value by three orders of magnitude in three years exemplifies the inflection point hit by the U.S. offshore wind industry,” said Hines. 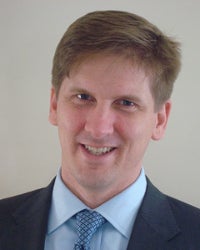 “Offshore wind energy is more than how to build a better wind turbine,” Eric Hines said. “It’s about the impact on the environment, port facilities, and manufacturing and deployment.”

Construction on the newly leased areas is still nearly a decade away, but if completed today, the collective projects would constitute the world’s largest offshore wind farm, according to CNN. The U.S. Interior Department projects that the area could generate up to 4.1 gigawatts, enough electricity to potentially power nearly 1.5 million homes.

Massachusetts is becoming a hub for wind energy. The New Bedford Marine Commerce Terminal, for example, has the capacity to stage and deploy offshore wind projects. And in January, the Danish turbine manufacturer MHI Vestas Offshore Wind announced plans to put its U.S. headquarters in Massachusetts.

As of August 2018, states along the East Coast have committed, through legislative and executive actions, to build more than 10,000 megawatts of offshore wind power capacity in the coming decade. “Massachusetts is the frontrunner, with the largest, most reliable power purchase commitments in the nation,” said Hines. “It makes sense that Tufts continue to develop its relationships with a robust industry that’s evolving right in our own backyard.”

The new master’s program incorporates on-the-ground learning with a curriculum that students can complete in one and a half years. Coursework will be created in partnership with industry members of the newly formed Tufts Offshore Power Research and Education (OSPRE) Collaborative, which will bring leaders in the private sector to campus to support the new curricula and career path development. Students with a strong interest in sustainable energy solutions and an interest in large infrastructure are among those encouraged to apply.

Be a part of the transition to a clean energy economy. Prepare for jobs in international industry, academia, and the public sector.

New core courses are Clean Energy Engineering, already being offered this spring semester, and Design and Analysis of Offshore Support Structures, to be developed next year. Electives encompass technical aspects of wind power such as Geographic Information Systems (GIS) and applied data science, and broader issues such as climate change policy and energy finance.  Faculty at the Gordon Institute, The Fletcher School and the School of Arts and Sciences will be key partners with the School of Engineering in shaping the curriculum.

The program will benefit from Tufts faculty who have been advancing partnerships and research related to offshore wind power. Hines and Dan Kuchma, a professor of civil and environmental engineering with expertise in concrete structures, for instance, are involved with the Massachusetts Research Partnership in Offshore Wind. It’s a group of Massachusetts academic and research institutions that received a $300,000 award in 2016 from the Massachusetts Clean Energy Center to convene Massachusetts academic expertise on the offshore wind energy system, which includes multiple branches of engineering, atmospheric and ocean science, fisheries, policy and environmental science. The partnership held nine workshops, sponsored a briefing on Beacon Hill, led the convening of the national Partnership for Offshore Wind Energy Research (POWER-US) and published the 2018 white paper Reaching Convergence in US Offshore Wind Energy Research [PDF].

POWER-US connects faculty and students to an international network of offshore wind research assets and expertise and articulating a multidisciplinary research vision. The partnership, said Hines, reflects a “systems approach” to offshore wind energy, an approach embodied as well by the new master’s program.

“Offshore wind energy worldwide has benefited tremendously from advances in turbine technology over the decades,” he said. “The technology has now matured to a level where large-scale deployment will be about the impact on the environment, port facilities, U.S. manufacturing, resilient design, and transmission. A Tufts graduate education can provide that level of broad, integrative thinking needed for workable solutions.”

Looking ahead, Baise said courses that support the operational and structural aspects of offshore wind will likely become integrated with other departments at the School of Engineering, and “as the needs of the industry are better understood, we will identify new opportunities for all our students,” she said.

One of those needs is developing larger turbines capable of producing more energy. Machine capacity, Hines said, is expected to grow to 12 megawatts or more in the coming years, substantially larger than the 3.6 megawatt industry standard from only a few years ago.

The United States is now poised to galvanize research and development around offshore wind machinery and infrastructure, Hines said. “Ten years ago, we thought that designing the Wind Technology Testing Center for 90-meter blades was ambitious, but we always thought someday this industry will be big in the United States. Now, it won’t be long before we have to expand the facility.”

Hines anticipates a “tremendous need” for expertise in offshore wind. Firms from Spain, the U.K., and the Netherlands already have expressed interest in hiring Tufts graduates, he said. “The US offshore wind industry will need tens of thousands of new professionals in the coming decades, and we are excited to join our POWER-US partner institutions to help make sure we are ready.”