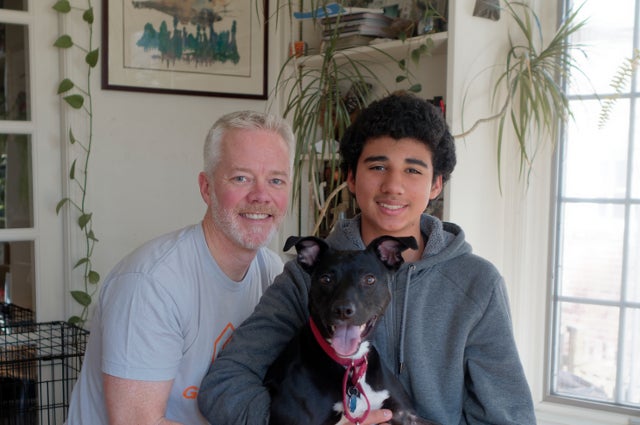 Brian Eriksen, E92, EG94, never planned to work in animal welfare. He was twenty-two years into his career in software development when he was tapped by a startup duo to help develop Get Your Pet.

The matchmaking website helps get pets adopted directly from one good home to another, without ever passing through an animal shelter’s doors. So far, GetYourPet.com has helped 5,500 animals find new homes—and it’s now facilitating more than 500 owner-to-owner adoptions a month.

Tufts Now interviewed Eriksen, the site’s chief technical officer and “ace techno-cat,” about his unanticipated foray into the animal-rescue world and this new approach to pet adoption.

Tufts Now: How did you get involved with this site?

Brian Eriksen: The idea for Get Your Pet came directly out of the animal-welfare world. Co-founder Angela Marcus had worked as the operations director for the Pennsylvania SPCA. She thought that—in a world of Uber, AirBnB, Lyft, and matchmaking sites like eHarmony—there ought to be a way to find homes for many of the pets that are surrendered to shelters through a new web-based, do-it-yourself, peer-to-peer solution.

Angela connected with co-founder Jeff Tucker, who assembled an initial round of funding. They connected with me through our network of colleagues in late 2015, and I assembled a team of contract developers and designers to start building the site. By October 2016, we had our beta version ready for testing, which took place in the Philly area because of Angela’s strong relationships with veterinary clinics and shelters there. In July 2017, the site opened its doors nationwide, in all fifty United States.

How does the process work?

The adoption process is very similar to an online dating site. A pet guardian looking to re-home an animal creates a profile for the pet. Potential adopters indicate their interest and ask questions by messaging within the site. When both sides feel there might be a good fit, they can plan a meetup for the pet and potential adopter to get to know each other.

What are the advantages of this approach to pet adoption?

Get Your Pet helps reduces stress on pets by keeping them from having to go through a shelter to get rehomed. It also hopefully will reduce the financial burden on animal shelters, which are typically funded by a municipality or through charitable donations. Shelters can then spend their dollars on caring for abandoned pets and other animals that arrive for reasons other than owner surrender.

For people looking to rehome or adopt a pet, it’s the person-to-person information exchange that’s most valuable. The adopter gets information about the pet firsthand from its guardian. They can ask lots of follow-up questions of the person who knows that pet best, rather than just having to go by what shelter staff have observed personally or what was recorded on the shelter intake form.

It’s also helpful for adopters-to-be to see how a potential pet behaves in a stress-free environment, such as a cat’s current home or a dog’s backyard or normal park. If you are adopting a second dog, you can arrange to bring your pet to the meet and greet to see if they get along and factor that into your decision—something that’s not allowed in many shelters.

What are the cons?

The biggest challenge of adopting or rehoming through the site is that you don’t have the benefit of an experienced shelter staff member or adoption counselor walking you through the process. We try to compensate for this by providing a very thorough set of questions, suggestions, and tips for both the pet guardian and the potential adopter.

How does the service make money?

For pet guardians, there’s no charge to create a listing to rehome a pet. They, however, can choose to pay $5 to $20 for extra online-marketing options to boost and extend the reach of their pet’s adoption profile.

Because we didn’t want to compete with animal-welfare organizations for their donor dollars, we decided to structure ourselves as a for-profit. The bulk of our revenue stream comes from adoption fees—$99 for dogs, $49 for cats—which goes toward the tens of thousands of dollars a month it takes to operate the site.

Adopters receive a voucher for a free veterinary exam, good within our network of 1,700 veterinary hospitals, because we want to instill the importance of pets receiving regular veterinary care. Adopters also receive discounts for a few other pet services and stores.

When Get Your Pet someday turns a profit, we’ve pledged to give a portion of that to shelters that partner with us.

What kind of safeguards are there to make sure that the people adopting the pets are reputable?

We monitor all messaging between adopters and guardians, and if something doesn’t feel right, we investigate. That can lead to an adopter (or guardian) being banned from the site. Willingness to pay the adoption fee is another indicator that the adopter will do right by the guardian’s pet. In the end, though, we empower the guardians to be in control and make the best decision for their beloved pet.

Do you have any adopted pets of your own?

As I was building out the platform, my adopted son, Nounn, kept asking, “When do I get a dog?” My husband and I wanted to adopt a pet, but we really wanted the dog to be his. So for fourteen days in a row—without being asked— Nounn had to go get a leash kept by the front door and walk it around block once before school and once before bed.

Once he punched that card, he then had to go get two references from adult friends of ours, who interviewed him to see if he seemed ready for the responsibility of caring for an animal. Finally, after all that, he was eligible to adopt through the site.

We are now the proud guardians of Tuck, a black lab/rat terrier/pit bull mix. Nounn walks him every day, before school and at bedtime, and feeds him in the morning and night. Tuck sleeps in his room.

Is the education you received at Tufts useful to what you’re doing now?

I wouldn’t be who I am today, both as a person or as a geeky computer nerd without the instructors and mentors I had at Tufts. Alva Couch and David Krumme (may he rest in peace) in particular were just totally awesome. I would go to office hours, and they had a huge impact on keeping me excited about engineering by giving me extra projects that challenged me.

To Leave No One Behind in Afghanistan