Around the World with Epilepsy

Neuroscientist Phil Haydon plans to circumnavigate the Earth, hoping to inspire and educate those with the disorder 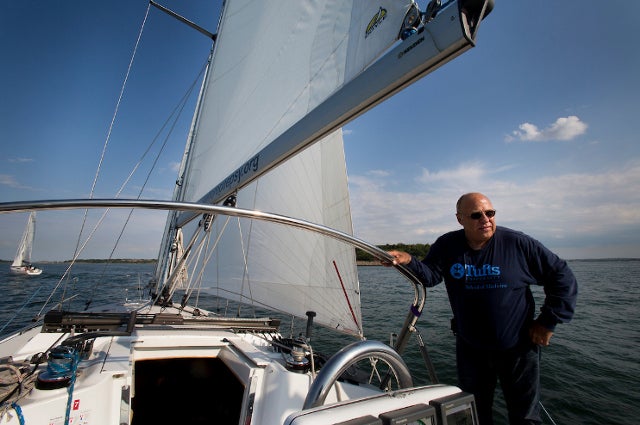 Phil Haydon was just fifteen years old in 1972 when he suffered a severe brain injury while biking home on the last day of the school year—a brick hurled by a classmate struck Haydon in the forehead, knocking him across the street.

Bleeding heavily, Haydon pedaled back to school and was whisked away in an ambulance to the hospital, where he started having seizures within the hour. Doctors removed part of his fractured skull, eventually replacing it with a metal plate. Haydon spent the entire summer recuperating, and it took another year to get the post-traumatic epilepsy under control with medication.

“High school was a struggle after that,” Haydon remembered recently in his office at the School of Medicine, where he is the Annetta and Gustav Grisard Professor of Neuroscience and chair of the neuroscience department. “I had trouble concentrating. My schoolwork was not the best.”

Still, he later earned a bachelor’s degree in physiology at the University of Leeds in 1979 and found his calling in the lab during senior year. “It was logical thinking and practical work, and that’s where I really caught fire in terms of what I wanted to do,” Haydon said. He went on to earn a Ph.D. in physiology from the University of Leeds and complete postdoc training at the University of Iowa. He gravitated to neuroscience—“there was a certain degree of being able to relate to it,” Haydon said—and landed at Tufts School of Medicine in 2008.

Today, Haydon has been seizure-free and the epilepsy pharmacologically controlled for over forty years. He is considered a leader in the study of neuroglial interactions, having discovered in 1994 that the central nervous system’s glial cells respond to chemicals, and in doing so, release other chemicals that can activate neurons.

Haydon’s lab has published papers showing how glial cells change during epilepsy and how perturbing them in certain ways limits the number of seizures an animal will have. “One of the questions now is whether glia respond to a primary pathology elsewhere,” Haydon said, “or if they can be the primary pathology that leads to epilepsy, Alzheimer’s disease, and other brain disorders.” 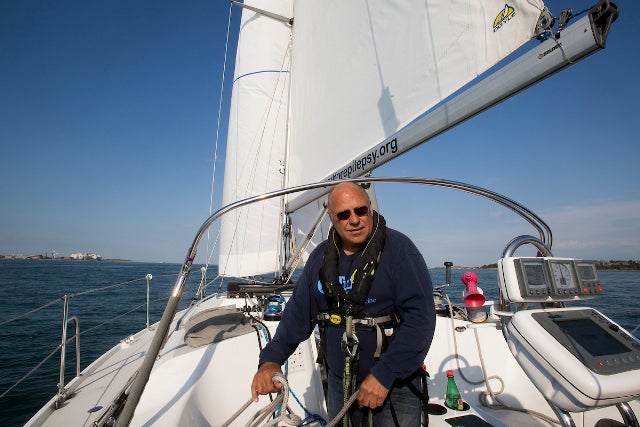 “People have told me I shouldn’t sail, because I have epilepsy, but I take lots of precautions,” said Phil Haydon. Photo: Alonso Nichols
Beyond his research, Haydon now wants to give back in another big way. In November 2021, he plans to set sail from Boston and circumnavigate the globe on a fifty-foot yacht flying a Tufts University School of Medicine flag to raise awareness and money for epilepsy research—about 50 million people worldwide have epilepsy. A percentage of all online and corporate donations to his Sail4Epilepsy nonprofit will go directly to the School of Medicine and the Epilepsy Foundation New England. After he returns to Boston, he will sell his boat and equipment and give all proceeds to the partners.

“People have told me I shouldn’t sail, because I have epilepsy, but I take lots of precautions. I have a tether and tie myself to the boat, and I’ve trained for single-handed sailing,” said Haydon, who’s been sailing since 2007 and hatched the Sail for Epilepsy idea around 2017. “If someone tells me I can’t do something, I do it.”

His biggest challenge on the high seas is sleep deprivation, which can induce seizures. Before completing a solo sailing race from Newport, Rhode Island, to Bermuda, in 2017, Haydon taught himself how to nap effectively and downloaded and calibrated an app that he used to monitor his reaction time aboard to determine if he required sleep.

Haydon estimates his upcoming circumnavigation will take three years, and instead of one continuous trip, he’s planning to complete it in legs with various crew members. (Between legs, he’ll fly back and forth to Boston to work and maintain his active lab at Tufts.) Along the way, he will blog about his experiences and post videos to social media, as well as track and share his brainwave activity via a personal electroencephalogram (EEG). In addition to meeting with Tufts alumni and educating people about epilepsy in ports around the world—including Sydney and Cape Town—Haydon hopes to encourage patients, particularly children, to overcome the disorder.

“I want to inspire them to achieve beyond what they are doing today, whatever that means for them,” he said. “Can you imagine if one person got inspired and it changed their lives? What if one person learns that epilepsy doesn’t have to be awful and they told their family and friends? I think big things can come from little steps.”

Courtney Hollands can be reached at courtney.hollands@tufts.edu.

What Causes the Brain’s Emotional Hub to Switch to Negative States?

Studying the Link Between Gum Disease and Alzheimer’s Disease