Art as a Revolutionary Force 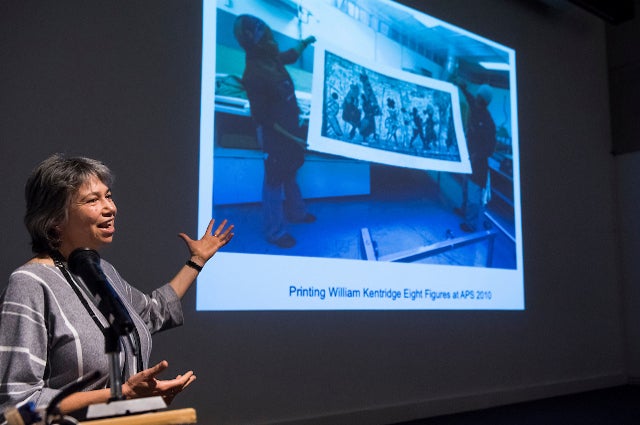 Kim Berman well remembers February 11, 1990. She watched on television as Nelson Mandela walked out of prison after twenty-seven years of confinement, a free man.

Long an anti-apartheid activist in her native South Africa, she helped organize a celebration for Mandela that June in Boston, which drew an estimated 250,000 people to the Esplanade.

At that point, Berman had studied printmaking for seven years at Tufts and the School of the Museum of Fine Arts—she received an M.F.A. in 1988 in the two schools’ joint degree program. “By then,” she said, “I had decided I wanted to go home.”

What she brought with her was an abiding faith in art and artists as powerful catalysts for social change. In 1991, she and her partner, the late Nhlanhla Xaba, co-founded Artist Proof Studio, a community-based printmaking center in Johannesburg giving young artists a chance to develop their gifts and become self-sustaining artists, helping them to progress toward self-expression that’s integral to shaping an egalitarian, post-apartheid society. 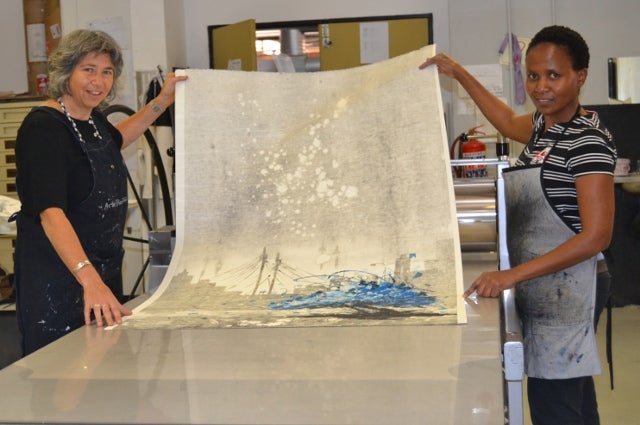 Kim Berman and master printer Pontsho Sikhosana printing on the Takash Press donated by supporters in Boston.
The Artist Proof Studio philosophy, she said, is expressed by its tagline “excellence through possibilities,” and by a “habit of mind” encapsulated in the acronym ISEE-U: Innovation, Self-Awareness, Engagement, Excellence, and Ubuntu.

Ubuntu can be translated as “I am because of you,” Berman said. “We see ourselves as an Ubuntu space, which is a kind of shared ‘I see through you’ approach to thinking about work as implicitly collaborative,” she said. “Our teaching program is all about helping people find their own voice and tell their story.”

She centered her talk around her book Finding Voice: A Visual Art Approach to Engaging Change (University of Michigan, 2017) at the event, which was co-hosted by the SMFA Department of Print, Paper, and Graphic Arts and the Tisch College of Civic Life. 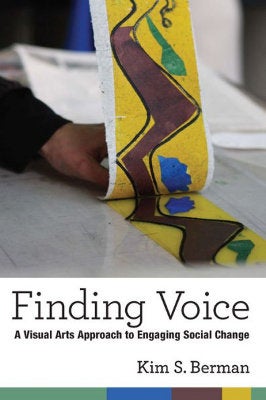 “Finding voice is about the idea that young people have a visual voice,” she said. “It’s about discovering how to speak in more powerful ways that reveal the potential of art and artists as changemakers who have the power to shape and transform the way people experience and see the society.”

Berman’s vision is rooted in Boston, where she arrived as a shy twenty-three year old to take a summer school course. When she found out about the Tufts/SMFA joint M.F.A. program, she applied. She became deeply involved at the SMFA, taking classes and working a shop manager in printmaking studio, teaching summer school classes, and on Tufts’ Medford campus as a teaching assistant in art history. (This was before Tufts acquired the SMFA in 2016.)

At the same time, her work in a local printmaking studio also proved pivotal to her growth as an artist and an activist. She was introduced to Artist Proof in Somerville (now Mixit Print Studio), an open-access printmaking collective where she worked for several years as a printer’s apprentice.

When it was time to go home to South Africa, Berman envisioned inspiring a new generation of young artists by transplanting the Artist Proof model in the new South Africa, where it would, she had full confidence, contribute to Mandela’s dream of a democracy, a society profoundly different from the one she left in 1983, where activists, including artists like herself, struggled against entrenched segregation, racism, and censorship.

Selling her car and possessions to raise funds, she ordered a 2,000-plus pound American French Tool etching press from a Rhode Island manufacturer. Featuring a heavy-duty steel bed and rollers, it could also be used to print engravings, monoprints, and woodcuts. Berman’s first task upon arriving in Johannesburg was finding a space to accommodate this top-of-the-line workhorse.

“We found a great warehouse in Newtown, which was then in the early stages of becoming a cultural district,” she said. Its main selling point was that it had double doors, so they could get the large press inside.

In time, young people from surrounding townships, for whom a university education was impossible, found at Artist Proof Studio a gateway to becoming professional, self-sustaining artists. As such, it “became a space where lots of artists could test what that new democracy would look like,” Berman said. “We declared it as a non-racial space. We also declared it as a place of economic access for young people who couldn’t afford to study printmaking at the university.”

The growth of Artist Proof Studio also reflects collaborations and critical financial support from the global printmaking community, including well-established South African artists like William Kentridge, best known for his prints, drawings, and animated films. When a devastating fire destroyed the studio in 2003 and took the life of Xaba, that outpouring of support allowed Berman to make a new beginning.

Among her loyal fans are SMFA faculty, who have generously supported her mission from its beginning through ongoing student exchanges and faculty-led workshops in printmaking, bookmaking, and papermaking.

“The relationship with the Museum School,” she said, “have been pivotal and fundamental to the growth of Artist Proof.” Faculty willing to travel to South Africa to teach not once but multiple times at their own expense, she said, “is the most remarkable commitment.” 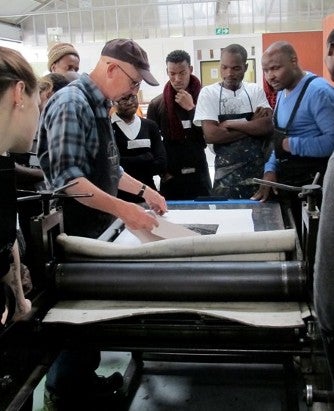 “Everybody believes in Kim—we all share personal admiration and dedication to her work,” he said. “When you are working in a medium like printmaking, it’s a kind of shop culture. You are working in a collaboration or cooperative space. You share the facility, you take care of it, and you feel a kindred connection with the people you work so closely with.”

It was in that spirit last spring that, as a Tisch Faculty Fellow, he offered the fellowship’s travel opportunity to noted lithographer Carolyn Muskat of Muskat Studios in Somerville, who is also a lecturer in print and paper at the SMFA.

Muskat—and her SMFA colleagues agree—said the exchanges “spread viable and contemporary methods of creating art,” at the same time they generate new ideas about art making. “You have to understand what resources are available and then come up with things that are sourced locally and that are sustainable and affordable,” she said. “The most rewarding part of the experience is expanding what’s possible.”

Indeed, Finding Voice brings that view of what’s possible to larger social struggles. One Artist Proof Studio program, Paper Prayers, responds to the HIV/AIDS crisis in South Africa, which has been especially hard hit by the disease. Using hand-printing methods, participants all over the country are taught how to make works of art on strips of paper, which then give them a chance to reflect and respond to the trauma of the disease on themselves, their loved ones, and their families.

The project, said Berman, “aims to break the silence” around the disease. “When you have a material, and you ink it up and you print it, and you talk about what the dark color means, and how dark it is . . . then you come to understand that you have to learn to live,” she said. As some women told her, “‘I have to be there for my children,’ because during the height of the crisis, so many parents were dying because of the stigma of being tested.”

The program was also brought into the studio, where students made a tribute to somebody they knew who had died. “They have to make an etching, and when you make an etching, you spend weeks thinking about this person,” she said. But it was also expected, she said, that the project would extend to everyone getting tested to know their status. “And that’s the way,” said Berman, “we used the idea of artmaking to save lives.”