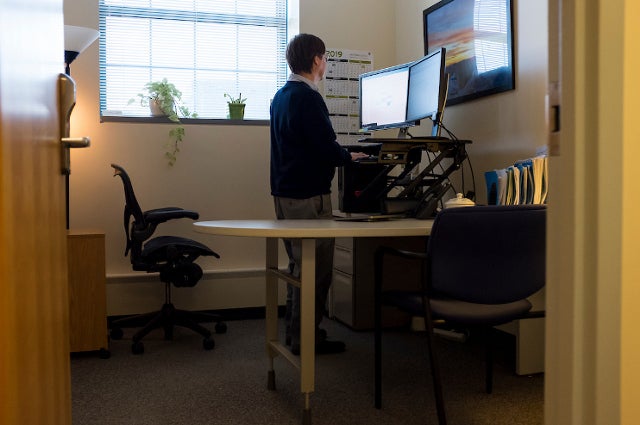 Studies have shown that prolonged periods of sitting can be as harmful to one’s health as smoking or obesity. That’s led to a movement to adopt what are called sit-stand desks, on the theory that standing will be better for the health of those who adopt them.

But are they effective? A review study by Nancy Baker, an associate professor in the Tufts Department of Occupational Therapy, in conjunction with colleagues at the University of Pittsburgh, found mixed results from the desks’ use.

While sit-stand desks did help users feel more comfortable, they did not compensate for a general lack of exercise. That’s because standing is, the researchers said, essentially “a sedentary task.”

“Similar to sitting in one place for extended periods, standing still does little to increase heart rate or burn excess calories,” said Baker.

“The study found only minimal impacts on any of those areas, the strongest being changes in behavior and discomfort,” said Baker.

Though use of the desks did not deliver on promises to help users lose weight, the study found they do contribute to small decreases in blood pressure and some relief of lower back pain.

“Though these are mild benefits, certain populations might benefit greatly from even a small change in their health,” said April Chambers of the Swanson School of Engineering at the University of Pittsburgh. “In order to achieve positive outcomes with sit-stand desks, we need a better understanding of how to properly use them; like any other tool, you have to use it correctly to get the full benefits out of it.”

The study authors noted that current scientific research on sit-stand desks is limited. Many of the studies included in the review were conducted with young and healthy subjects who were asked to use the desk for a week or month at most. More research is necessary to judge the desks’ full benefits and drawbacks, and how to use them best in an office setting, the researchers said.