My Path, My Story: Claiming My Identity

Michelle Nguyen, A22, talks about growing up different and her love of learning 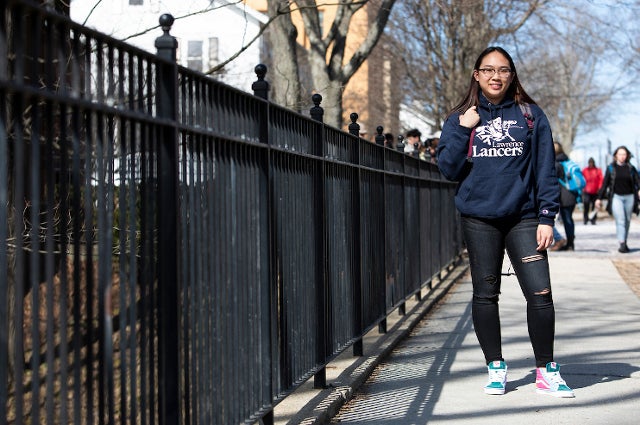 Michelle Nguyen, A22, was born in Lawrence, Massachusetts, a former mill city north of Boston. Her immigrant Vietnamese parents, who initially settled in Florida, decided to call Lawrence home; they found assembly jobs in the tech industry, raised two daughters, and bought a house. As an Asian American growing up in a largely Latinx community, Nguyen would struggle in high school with being a minority; to avoid hurtful stereotypes, she tried to fit in. But by claiming her ethnic identity, she reclaimed a stronger sense of self, a confidence she would bring to Tufts as an undergraduate with a nuanced appreciation for cultural diversity.

I’ve always had a love of learning. From a very young age, I would beg my dad to give me math problems. Math was our common ground. And he’s always loved learning, too; he passed that down to me. Both my parents are very big on school. In high school I realized I needed to take advantage of all the resources I could. I wanted to continue my love for learning, and make my parents proud. They have always been a big part of the support system that helped me get to college.

When I was young, that support was really a big part of my life, and I didn’t notice I was ethnically different from everybody. But when I got to high school I started to notice my difference. By then, I was one of only twelve Asian American students in a class of 780, most of whom were Latinx. I couldn’t find a racial community. It was hard to find who I was racially, to feel like I had a voice and that I belonged.

I tried to fit in, and that meant I tried to avoid my Asian American culture and identity. That hurt my self esteem and self-confidence because, even though I wanted to fit in, I was trading that acceptance for self-worth. I let racial comments pass by me, like they were jokes, but they weren’t jokes. They called me Chinese girl or asked if I ate dog. It was very tough to find my place, and I felt ashamed to be Vietnamese.

Things changed my junior year when I took an AP English class. One of our prompts was to write a research paper on any topic we chose. Although it was hard for me, I chose to research a project on debunking and deconstructing Asian-American stereotypes, particularly for Southeast Asians. It was emotionally and mentally challenging to sit there and look at everything from the perspective of where I was coming from. But it was eye-opening to see why people are stereotyping. 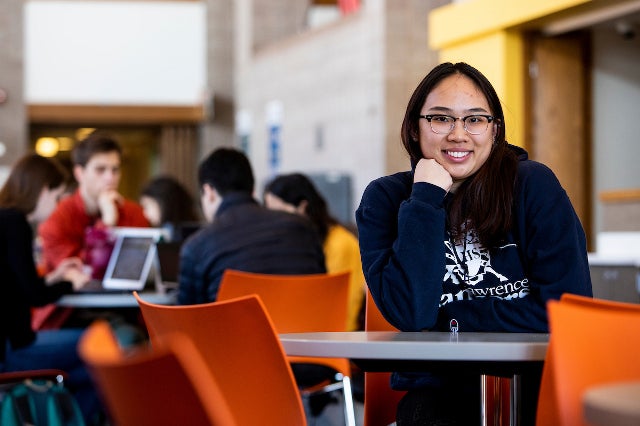 “I wanted to continue my love for learning, and make my parents proud,” said Michelle Nguyen. “They have always been a big part of the support system that helped me get to college.” Photo: Anna Miller
I think being able to share my experiences with the class and my teacher—and how they all supported me—that really helped me realize that I don’t need to put myself in this box. I can appreciate my own culture and I can let other people appreciate my own culture. My freshman and sophomore years, I was hiding who I was. I had created this obstacle for myself and I needed to get over it. It wasn’t the other students—they didn’t know any better. They didn’t know my culture. But I did have the voice to educate them about the Vietnamese culture and its values.

When I was applying to college, I was looking for a lot of diversity. I was looking for a community where different cultures came together. When I came to visit with Voices—the Voices of Tufts Diversity Experiences program—my senior year, it was nice to know that Tufts does advocate for diversity and inclusion as much as they can. Tufts has every single community that you could think of here.

In fact, the one group I joined was the Caribbean dance group, Roti and Rum. I think if I was still in my freshman-year-of-high school mindset, I probably wouldn’t have tried out for this group. But here I was at Tufts! That’s why I was here: to go for a new experience and involve myself in new cultures.

I think the biggest advice I could give another person is to be true to who you are. Know that no matter what is going on around you, you have a lot to be proud of, and in your own way, you will always be enough.

How do I start a perennial garden?