The undergraduate Class of 2023 sees a record number of applicants and a 14.6 acceptance rate 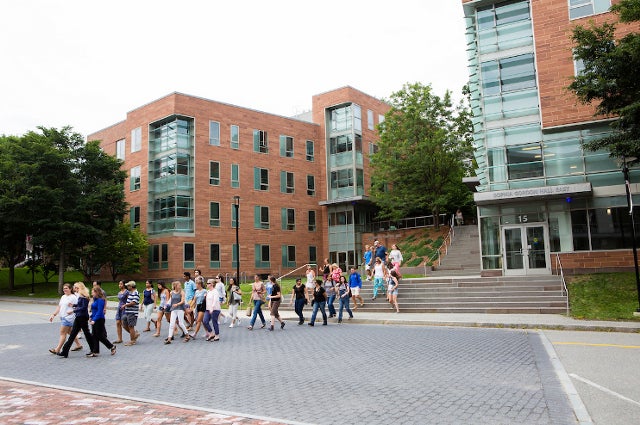 Tufts has completed another highly selective undergraduate admissions cycle, with 14.6 percent of a record 22,766 applicants being offered a spot in the Class of 2023. The university notified the potential Jumbos by email on March 28.

This year’s undergraduate acceptance rate is the same as last year, but the applicant pool was 5.8 percent larger. It is on par with the second lowest record of 14.6 percent for the Class of 2022, according to the Office of Admissions. The class size is larger this year because more students were admitted to the B.F.A. program at the SMFA at Tufts, as that program grows in popularity, and to accommodate the new Tufts Civic Semester program participants .

“Tufts continues to attract a wide range of exceptional applicants who focus on being active in the world—and their own neighborhoods,” said Karen Richardson, dean of undergraduate admissions and enrollment management.

Of the students accepted under regular decision, women make up more than half of the total. The accepted students come from across the country—forty-nine states, the District of Columbia, and Puerto Rico—with Massachusetts, New York, and California topping the list.

They also come from around the world, with 9.5 percent citizens of other countries. International students come from sixty-four countries, with the most from China, South Korea, Canada, India, Brazil, and Turkey.

The mean SAT scores are 751 in math and 726 in evidence-based reading and writing—the section formerly known as the critical reading test. Both are slightly higher than scores from last year’s admitted students. The mean ACT score is 33.5, up from 32.9 last year.

Just shy of 60 percent attended public high schools, and 12 percent are the first in their family to go to college, compared to 11 percent last year. Eleven percent of this year’s accepted class in regular decision are eligible for Pell grants.

Accepted students have until May 1 to make a deposit on their first-semester tuition, letting Tufts know that they will enroll in the fall. They and their families are invited to visit the campus on April 12, 18, or 19, known as Jumbo Days, to meet current students, attend classes, and experience the academic and social life at Tufts.