A Business Model for Success—and for Good 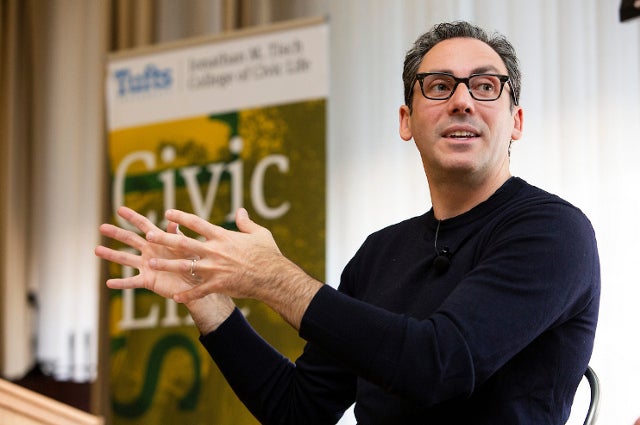 Designer eyewear for $95? Neil Blumenthal, A02 and four classmates at the University of Pennsylvania’s Wharton School were convinced the idea had huge potential; after all, everyone they had talked with complained that glasses were too expensive.

They were right on the money—more so than they ever imagined. With $2,500 seed investment through the school’s Venture Initiation Program, they launched Warby Parker in February 2010.

Today Blumenthal is co-founder and co-CEO of a company that has come a long way from a spunky startup, as it continues to transform how consumers think about and purchase glasses. As its online sales model thrive, so do close to 100 brick and mortar retail locations.

The company is also a recognized leader in social entrepreneurship, providing more than five million pairs of glasses to those in need across fifty countries. For addressing a global problem directly linked to improved learning, health, and prosperity, Blumenthal was named a Young Global Leader by the World Economic Forum and among the 100 Most Creative People in Business by Fast Company.

Blumenthal shared that mission with students and other guests when he returned to Tufts on April 2 to talk about the company at a conversation billed “Glasses for Good,” sponsored by the Tisch College of Civic Life and the Tufts Entrepreneurship Center.

Tisch College also awarded him its Corporate Citizen Fellowship, an honor that acknowledges a corporate leader who has championed corporate social responsibility and social innovation to create positive change. 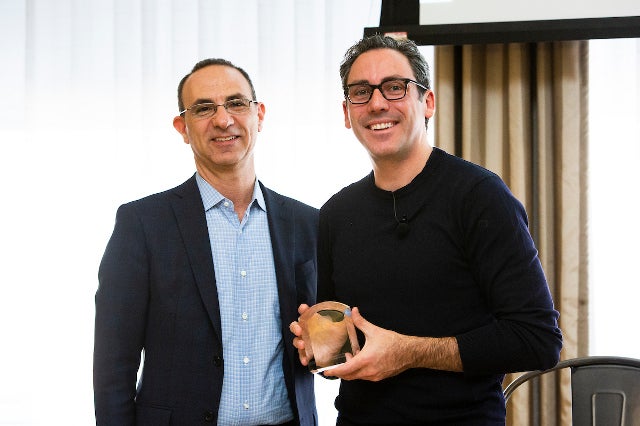 “We’ll never literally know the impact he’s had on thousands of kids that are now able to see and read the board in the classroom,” he said. “His impact is great, and its scale is tremendous.”

At the event, Blumenthal spoke with Alan Solomont, A70, A08P, the Pierre and Pamela Omidyar Dean of Tisch College, and students in the audience about lessons learned in his years as an entrepreneur. Here are some of the takeaways.

Be willing to go back to the drawing board. In the beginning of Warby Parker, “we were constantly looking for feedback to the idea that we’re going to sell glasses online for the fraction of the cost and everybody said, oh yeah, glasses are too expensive, but I don’t know if I want to buy them online. They wanted to touch them and try them on. You hear that enough times and suddenly the optimism that you feel about your brilliant business plan starts to decline a bit—and that forced us back to the drawing board to come up this idea of the home try-on program, where you ship people five pairs of glasses and they try them on at home, and at that point if there is a pair you want, we would put in the prescription lenses and send it to you.”

Understand where social mission fits in. The sense of a social mission is integral to the Warby Parker culture, Blumenthal said. “But I don’t want to oversell the social mission to customers. The beauty of social enterprise is that you are constantly realistic and pragmatic,” he said. “The customer we’re targeting, the thing that is most important to them is fashion and design—how do the glasses look on their face? Second, how much do they cost? Third, quality. Fourth, service. Lastly, if at all, in their decision to purchase, is social mission. But the number one reason why people come to work for us is the social mission . . . and that’s incredibly important to us.”

Life experience matters. “It’s really hard to start a good business unless you have a lot of context on the industry or product or customer. Good ideas generally come out of life experiences. Warby Parker only exists because of the experiences of my cofounders and having worked at the nonprofit VisionSpring; that gave me visibility into the optical industry. I actually visited factories in China, where the glasses I was making were for people who were making $4 a day. Ten feet away, some of the biggest names in fashion industry were coming off the production line. I was thinking oh—lightbulb—this doesn’t make sense. Similarly, the people on the board of directors of the nonprofit VisionSpring were senior leaders in the optical industry, so when you’re starting a business in the optical industry, you how have people you can reach out to ask tons of questions.”

Make sure your idea is viable before investing time and money. “You can start a business at any stage of your life, but the more experiences that you have really helps jumpstart and propel a business that solves a problem. If you’re hellbent on starting a business tomorrow, every day I would jot down a few frustrations and at the end of the week maybe have at least ten. By the end of the month, maybe you have eighty, and you can start thinking about solutions to those frustrations. You might want to funnel ideas and possibilities to get to a good outcome. But—and this is going to sound counterintuitive—invest as little time and money as possible into your idea until you get more and more proof points that it is viable. You want to be incredibly stingy. The only thing you have is time.”