The Health-Care Cost of Weight Bias

At a recent obesity medicine conference, Fatima Cody Stanford was approached by a colleague who said she’d always been standoffish around Stanford and wanted to explain why. When they were five years old, she said, taking a dance class together, Stanford had told her she was fat.

“Part of me died inside. I see myself as an ally for those with overweight and obesity, and I influenced her whole life by my comment,” said Stanford, the keynote speaker on weight bias and health at the third annual Breaking the Silence symposium, held March 29 on the Boston Health Sciences campus. 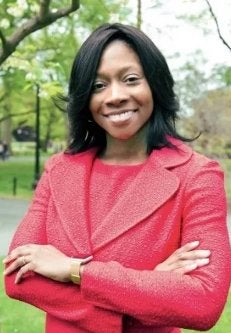 “People see obesity as an accusatory thing, accusing someone of doing something wrong,” Fatima Cody Stanford said. “Maybe there’s a way to approach them potentially in a loving and respectful way about obesity.” Photo: Courtesy of Fatima Cody Stanford
“We don’t realize what we’re saying can have huge implications for how people carry out their lives,” said Stanford, an obesity medicine physician at the Massachusetts General Hospital’s Weight Center. That lesson informed her talk, using the terms “people with overweight” and “people with obesity” instead of “overweight people” or “obese people.” “Stating ‘obese person’ sets up a stigma before you begin the conversation,” she said.

Stanford listed the many factors that contribute to a person’s body weight—from the gut microbiome and the hunger response to the quality of available food, weight gain-inducing drugs, and environmental toxins. “We spend all our time focusing on the biological factor, but there are others,” Stanford said.

Weight bias is pervasive in our society, she said, citing an article saying that people associate the image of an obese person with adjectives such as “lazy,” “undisciplined,” and “careless.” She also told the audience about a young female patient with severe obesity—her BMI was 56—who applied for a job at a Boston retailer and was immediately rejected; a few years later, after she had gotten her BMI down to 27, and she applied again. “She had no additional training or schooling, and she was hired within twenty seconds of starting the interview,” Stanford said.

Examining when and how weight bias develops, Stanford pointed to a study revealing that infants whose mothers prefer images of leaner people versus people with overweight pick up that preference themselves. She also discussed how weight bias leads to negative health outcomes, citing a study that followed a group of boys ages seven to eleven who developed conduct and emotional problems and restrained eating behaviors after being teased about their weight. Another study showed that those who experience weight stigma suffer higher rates of stress, depression, low self-esteem, and substance abuse.

Turning her focus to the health-care field, she said weight bias is less common among health-care practitioners than the general public, but is still pervasive. Studies have shown that although implicit (or unintentional) weight bias has been going down among students at forty-nine medical schools surveyed in recent years, explicit weight bias has been going up. “We aren’t doing as well as we’d like to think we’re doing,” she said.

And medical students receive little training about obesity, she added. To prove her point, she asked how many people had heard of Behçet’s disease, a rare disorder—many hands went up. Then she asked how to treat obesity—far fewer hands went up. “Which one should we really be learning about?” she asked. “We suck—that’s my professional wording—at obesity education.”

Weight bias harbored by health-care practitioners can be particularly damaging, Stanford said. “You go into the office, you have no place to sit, the blood pressure cuff doesn’t fit your arm, someone is snickering behind the desk when you come in and get weighed—it all sends cues that you don’t belong here,” Stanford said. “So you avoid and mistrust the provider and staff, you don’t want to adhere to their recommendations, you don’t want to communicate because you don’t feel comfortable.”

What can be done about weight bias in the health-care field? “There needs to be more training at the undergraduate medical education level. Then there need to be residencies,” Stanford said.

It’s also important to look at the bigger picture, Stanford said. In response to a question from Linda Hudson, assistant professor of public health and community medicine at Tufts School of Medicine, she said there is “significant synergy” between medicine and public health on this issue. “One of the best strategies for targeting obesity is fetal programming. If we target moms and dads pre-conception, that means we have to target the whole population,” Stanford said. “But that’s not the conversation we’re having.”

Finally, Stanford said, physicians and other health-care professionals need to learn to talk sensitively to patients about managing their weight. Joyce Sackey, dean for multicultural affairs and global health at the School of Medicine, brought up a situation handled poorly by a resident at another medical school in the past. A patient came in with knee pain, and the resident began to lecture her about managing her obesity. “Her agenda was not addressed, and she felt insulted,” Sackey said.

Others have suggested that weight shouldn’t be brought up at all—a student in Friedman School’s biochemical and molecular nutrition program brought up the “health at every size” movement, asking whether the focus should instead be on lifestyle and behaviors.

Stanford pushed back. “We do have to recognize obesity is a disease and treat it as such, and ‘health at every size’ sometimes does counteract that process,” she said. The resident who lectured the patient about her obesity was right to bring up the issue—it’s the approach that could use work.

Most residents, and most health-care professionals, could stand to do some of that work, Stanford said. “People see obesity as an accusatory thing, accusing someone of doing something wrong,” she said. “Maybe there’s a way to approach them potentially in a loving and respectful way about obesity.”