How to Crush It at the Boston Marathon

Top runner Peter Bromka, A05, who came in thirtieth in 2016, explains how he prepares for the marathon 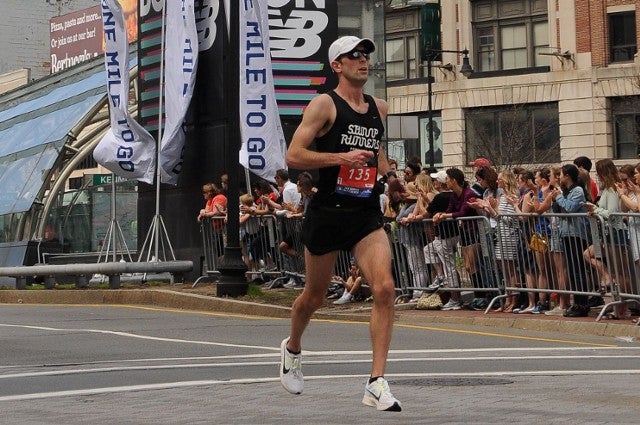 Peter Bromka, A05, first ran the Boston Marathon when he was a senior at Tufts—it was a tough slog. Eleven years later, he broke the 2:30 mark, and came in thirtieth overall and tenth for American runners. Strength training is what it’s all about, he says, as he preps for his seventh Boston Marathon on April 15.

Now living in Portland, Oregon, he says the Boston Marathon always holds an allure for him. “I love how unpredictable Boston is,” Bromka said. “The hills, the weather, the competition. Every runner takes it seriously.”

Tufts Now reached out to Bromka recently to learn about his best and worst races, how he prepares for the run, and how he celebrates after the race.

Tufts Now: What was your best Boston Marathon—and your most challenging one?

Peter Bromka: The best Boston Marathon I ever ran was 2016 when I came in with big dreams of breaking 2:30. I’ve written a full essay about it on my site, but essentially I’d been training since the bombing in 2013, and things were really starting to click. I dared to tell people I wanted to break 2:30, and that scared me enough that even when it got hot during the race, I was so focused on running within myself that by the time I looked around I was towards the front. I ended up finishing thirtieth place, the tenth American. A total shocking surprise. 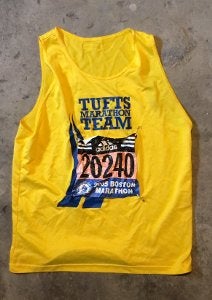 Peter Bromka recently posted on Twitter this photo of his 2005 jersey, when he first ran the Boston Marathon.

My hardest Boston was 2005, my first marathon when I ran for Tufts as a charity runner. We started at the absolute back of the pack and I weaved through runners for over three hours. By the time I got to the finish line, I burst into tears. But that’s become pretty common for me in Boston.

What’s your favorite mile/moment on the Boston Marathon course?

The top of Heartbreak. There’s a Tufts Cross Country tradition of standing near the crest and encouraging runners in their weakest moment. I remember those years cheering so fondly. When I hit that point it’s so tiring, and to see the brown and blue, it nearly cracks me emotionally. But the beauty of the course is once you hit that peak, it’s just time to go. No excuses, time to race.

Why do you keep running it?

Without realizing it, the Boston Marathon worked its way into my blood during college. When I get off the plane at Logan, I can smell it in the air—it’s Boston season. Just seeing the early spring colors of eastern Massachusetts brings me back to those formative years when I was so young and learning about the world up on the Hill.

The Boston Marathon has the best fans. The New York marathon has more fans, but for Boston fans, it’s personal. You’re running their race. You better go. Town after town of increasing size, they want you to give your best to honor the race they cherish.

What’s your secret to improving your time?

Building strength takes time. I was so fast in 2005 coming off of being a college runner. But I wasn’t strong. I’d run maybe one or two twenty-milers. I actually thought anything over eighteen miles was probably bad for your legs. Now I’ve run over 100 twenty-milers. Going beyond twenty miles just doesn’t faze me anymore. That’s key to really racing the final miles. If you’re not ready for the final six miles, you can give back a lot of time by slowing significantly.

What makes the Boston Marathon so special/different compared to other races?

I love how unpredictable Boston is. The hills, the weather, the competition. Every runner takes it seriously. But unlike Chicago, you can’t just expect to go out at one pace and continue the entire way. You have to ebb and flow with the downhills and uphills. I am not a Type-A person—I work best when things are messy and evolving on the fly. This translates well for Boston when the wind is changing directions, the temperature is hot or cold, and the hills are undulating.

How many total training miles do you estimate you’ve logged in your Boston Marathon history?

This will be my sixth Boston Marathon, so I’ve already raced over 130 miles on the course. Sometimes I’m jealous of runners who live and train on the course. And other times I’m not. Maybe it’s best not to remember exactly. Better to arrive on the day, smash yourself, have a Sam Adams and fly home with a year to forget how hard it is.

Those final miles are technically net downhill, but they suck. They’re so hard. Sort of rolling in a way that just punishes your legs. The thing I tell people is, “You’re gonna feel like crap, but if you focus, you’re probably still moving strong. Don’t worry, just race.”

How do you celebrate afterward?

With my Tufts friends! It’s always a homecoming. I lived for years in Central Square, so we’ll typically end up there and reconnect with Jumbos from over the years. There’s nothing sweeter than sitting around with your college friends drinking a beer in the April afternoon sun after having just crushed the Boston Marathon.

How quickly do you resume your marathon training?

To be honest, it’s easier physically than emotionally to recover from Boston. There’s a real sense of aimlessness in May and June, after so many months training with such purpose. I take one to two weeks without running, just depending on how the legs feel. Boston used to crush my legs; not as much anymore now that I’m older and stronger. But emotionally there’s a feeling of loss. Like after graduation, where you find yourself daydreaming of all the fun that’s over for now.