Special Representative of the UN Secretary-General and CEO of Sustainable Energy for All, she will start on October 1

Rachel Kyte, who has led United Nations efforts toward greater access to clean, affordable energy as part of action on climate change and sustainable development, has been named dean of The Fletcher School at Tufts University. Kyte is the first woman to lead the nation’s oldest graduate-only school of international affairs, which attracts students from all corners of the globe and at all stages of their careers.

Currently the chief executive officer of Sustainable Energy for All (SEforALL) and special representative of the UN secretary-general for Sustainable Energy for All, Kyte previously was the World Bank Group vice president and special envoy for climate change, leading the Bank Group’s efforts to shift its operations and campaign for the Paris Agreement.

A 2002 graduate of Fletcher’s Global Master of Arts Program (GMAP) and a professor of practice at the school since 2012, Kyte will assume the deanship on October 1, 2019.

“Tufts University and The Fletcher School are acquiring a formidable talent in Rachel Kyte, who has a track record of outstanding accomplishment at the highest levels of some of the world’s most distinguished organizations,” said President Anthony P. Monaco. “Rachel’s leadership and commitment to addressing global challenges such as climate change—combined with her deep understanding of the complexities of multilateral international negotiations, and her advocacy for the marginalized in society—make her the perfect choice to lead The Fletcher School.”

In her UN role and as CEO of SEforAll, a nonprofit public/private platform created from an initiative of the UN secretary-general, Kyte has led efforts to promote and finance clean, affordable energy and low-carbon growth as part of the UN Sustainable Development Goals in the context of the Paris Agreement. She has grown SEforALL into an organization that employs more than forty staff and has partnerships with companies, governments, and civil society organizations. She also serves as co-chair of UN Energy. 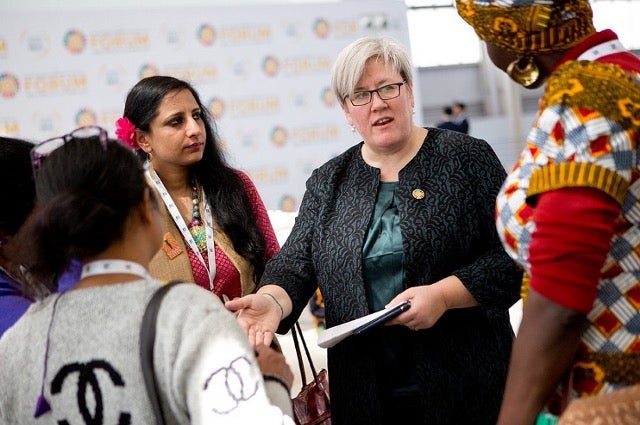 “We are now at a transformational time in history in terms of higher education, as well as world politics and civic engagement,” said Rachel Kyte. Photo: SEforALL
“Rachel has demonstrated exceptional leadership and tireless determination in her advocacy for the policies and investment needed for cleaner, modern energy services for all, whether in a cosmopolitan city or a refugee camp,” said Deborah T. Kochevar, provost and senior vice president ad interim. “Her willingness to work across international divides and differences of opinion on complicated issues will serve as a model for students at The Fletcher School.”

Kyte’s experience as a GMAP student at Fletcher, during which she was surrounded by classmates who were leaders in a variety of fields from across the globe, was formative.

“It is a true honor to return to The Fletcher School, my alma mater, as its fourteenth dean. I know first-hand the powerful impact a Fletcher education can have. To be in a class with such accomplished people from so many countries at such interesting times in their careers was as exciting to me as working with the faculty,” said Kyte. “We are now at a transformational time in history in terms of higher education, as well as world politics and civic engagement. I look forward to harnessing the brainpower and enthusiasm of this community to heighten Fletcher’s impact on the world as we prepare the next generation of global leaders.”

At the World Bank Group, Kyte developed and implemented a groundbreaking climate strategy for both the World Bank Group and the broader multilateral development bank (MDB) community. She led the MDB/International Development Finance Club coalition on climate financing up to and through the Paris climate negotiations (COP21), and established political momentum around carbon pricing and fossil fuel subsidy reform as well as insurance industry leadership in solutions for climate resilience.

She was previously World Bank vice president for sustainable development, managing the largest lending program of the World Bank across a variety of sectors. She introduced work on inclusive green growth, secured a series of critical partnerships with international entities, and stewarded landmark Turn Down the Heat publications that used climate impact models to project economic impacts.

As vice president for business advisory services at the International Finance Corporation, Kyte managed the company’s non-financial risk in the investment and operations committees, managed teams responsible for corporate governance and environmental and social performance, and revitalized the corporation’s performance standards, including their approach to business and human rights.

While Kyte’s life work has directly focused on climate change and sustainable energy solutions, she notes that it has intersected with nearly every field covered at Fletcher. “Given the direction our global society is moving, it is imperative that we foster and fortify the areas in which Fletcher has built its name and continues to set the bar,” she said “Fletcher’s longstanding commitment to the highest level of tutelage in diplomacy, international security, human security, law, negotiation and mediation, and deep regional expertise—to name just a few key historical strengths—as well as more recent focus on critically important areas such as global business and cybersecurity, is more important now than ever before. I’m thrilled for the opportunity to build upon Fletcher’s strong foundation while identifying new growth opportunities for the School.”

Kyte grew up in eastern England and has a deep appreciation for the value of apprenticeship, mentoring, sponsorship, and skills learned on the job in addition to in the classroom. She earned her undergraduate degree in history and politics from the University of London.

The recipient of numerous awards for leadership, climate action, and sustainable development, Kyte serves in an advisory capacity to a number of organizations, foundations, and investment initiatives.

Kyte is married to Dr. Ilyse Zable and they have two children.

A Conversation with Rachel Kyte, New Dean of The Fletcher School

Rachel Kyte, F02, Has Advice for Women Leaders: Rage at the Machine, Not Each Other