A New Eye on the Cosmos 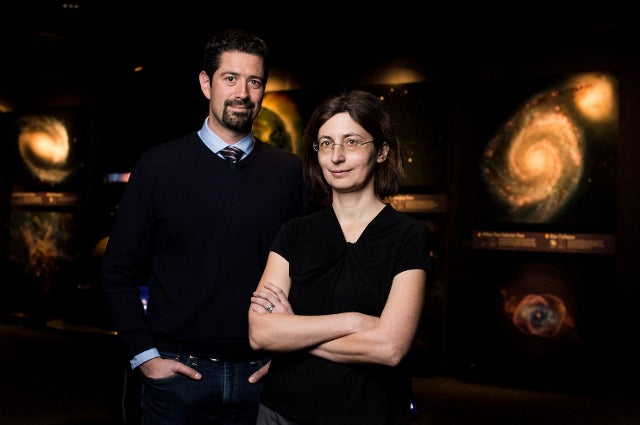 How do galaxies form and evolve? And how do central supermassive black holes form in galaxies and influence their hosts? Those are two of the big questions that Tufts astronomers hope to answer when they start using a new, highly sensitive instrument that’s set to come online in a few years on a landmark telescope in Hawaii.

Danilo Marchesini and Anna Sajina, both associate professors, are part of a large international group responsible for building the state-of-the-art Prime Focus Spectrograph (PFS), which will be located on the summit of Mauna Kea, Hawaii.

The PFS will employ 2,400 optical fibers at the top of the existing Subaru 8.2-meter telescope, allowing it to take simultaneous exposures of 2,400 astronomical objects in the night sky. That data will be fed into four spectrographs, each one linked to 600 optical fibers. Spectrographs separate light into its different wavelengths, gathering information about light that is invisible to the eye. “They are basically made of three cameras: an ultraviolet camera, an optical-visual camera, and a near-infrared camera,” said Marchesini.

Testing will start in 2020, and the PFS is expected to come fully online in late 2021 or early 2022. The multinational team building the instrument is led by scientists from Japanese, Taiwanese, Brazilian, Chinese, French, and U.S. institutions, including CalTech, Johns Hopkins University, and Princeton.

Being part of the PFS team means that Tufts astronomers are guaranteed some 300 to 350 nights of access to the instrument over a period of around five or six years for a series of research experiments, and will have immediate access to the data that is generated. While Sajina and Marchesini are studying galaxy formation and actively accreting supermassive black holes, other groups will explore the origins of dark matter and dark energy, as well as the history of our own Milky Way and its satellite galaxies.

In astronomy, access to such new instruments is highly sought after, said Marchesini. “With Anna and I being part of PFS, each of us basically get four junior members in our research group with the same unlimited, unrestricted access to the data, which includes postdocs, graduate students, and undergraduates,” said Marchesini.

That greatly expands opportunities for Tufts students and postdocs, who will have access to the PFS-generated data and who could also potentially take part in other areas of PFS research as well. “There’s a whole new world of science that can be done here at Tufts that before wasn’t available in-house,” said Marchesini.

Being part of PFS and having so many guaranteed nights of data will also help in seeking funding for other astronomy research. “Because we already have guaranteed data, we don’t have to prove to the funding agency that we will be able to obtain such state-of-the-art data,” Marchesini said.

He noted that having this access to the PFS has already proved beneficial. Sajina, who is on sabbatical this semester doing research at CalTech, is the principal investigator on a research project using the NASA Spitzer Space Telescope, which was funded in part based on the her PFS participation.

Supermassive Black Holes and the Evolution of Galaxies

Sajina and Marchesini already have detailed plans for their nights on the PFS. Their first goal is using it to understand how galaxies form and evolve, and in particular how supermassive black holes at the center of galaxies affect the evolution of the whole galaxies. They are looking at what’s called the active galactic nuclei—when material falls into the supermassive black holes and emits huge amounts of radiation as they do so. 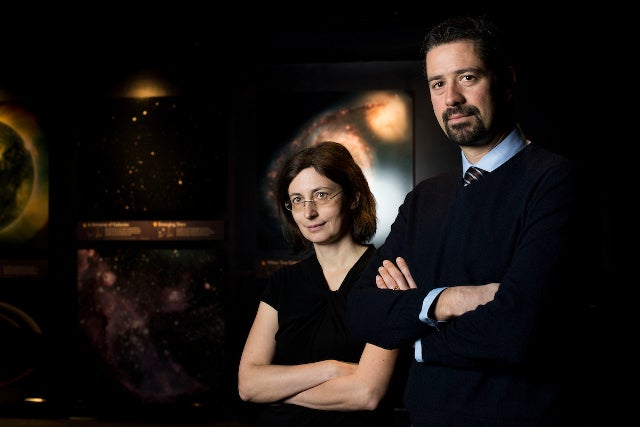 Galaxies are not uniformly distributed in the universe—there is “sort of a spider web distribution of galaxies, with filaments,” Danilo Marchesini said. “When these filaments come together, you have clusters of galaxies. One big question is how this overall environment of large structures affects the galaxy evolution.” Photo: Alonso Nichols
They will use at least 100 nights to study the connection between those active galactic nuclei and the evolution of galaxies. To do that, they will look at light from the part of the spectrum that is tied to what’s called cosmic noon, the period of active star formation in the universe about 10 billion years ago.

They will also look at how galaxies stop their star formation—“for example, the physical mechanisms for quenching the star formation, turning them from actively star forming galaxies to quiescent galaxies,” said Marchesini.

They are also hoping to learn how a galaxy’s environment affects it. Galaxies are not uniformly distributed in the universe—there is “sort of a spider web distribution of galaxies, with filaments,” Marchesini said. “When these filaments come together, you have clusters of galaxies. One big question is how this overall environment of large structures affects the galaxy evolution. The PFS will allow us to investigate that, for the first time, at cosmic noon.”