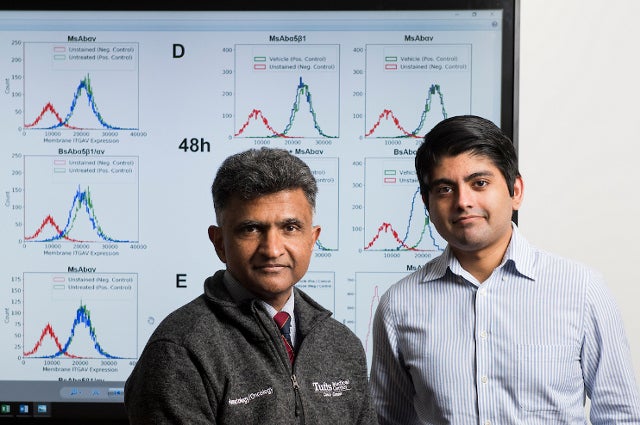 Paul Mathew is poring over a CT scan of a patient with advanced prostate cancer. He scrolls slowly through cross sections of the body, beginning at the shoulders, moving gradually down to the pelvis while pointing out major organs. The lungs, heart, and liver all look fine, for the most part. The prostate gland is slightly enlarged, and only a few nearby lymph nodes seem swollen.

To my untrained eyes, this seems like promising news, but his patient is in serious trouble. Mathew points to a faint white glow that emerges from each bone he passes. All of them, from shoulder blades to vertebrae to hips, are riddled with cancer cells that have spread from the diseased prostate.

“In most cancers, the tumor isn’t the thing that kills. It’s the metastasis,” he said, gesturing to dying bones and marrow on the scan.

Mathew is a practicing oncologist at Tufts Medical Center and associate professor at the Tufts School of Medicine who specializes in prostate cancer, the second most common form of cancer in American men. Contrary to popular belief, he said, prostate cancer doesn’t metastasize randomly throughout the body—the places it ends up are specific and predictable. It usually homes in on active bone marrow, the stuff that creates our white and red blood cells. But Mathew thinks that specificity might just be the key to treating it.

Mathew’s research has its origins in a cancer theory called “seed and soil,” which first emerged in 1889. The basic premise is simple: certain types of cancer cells only thrive in specific tissues, just like plants need particular types of soil for their seeds to grow. But why does prostate cancer prefer bone marrow? Why not some other area of the body?

That’s a tough nut to crack, Mathew notes. “We’ve never had a great model of prostate cancer and bone metastasis that replicates what we see in humans,” he said. “We’ve been able to approximate it in mice, but the disease mechanism is species-specific, so you can’t totally understand it using mouse models alone.”

Mathew first started chipping away at this problem when he arrived at Tufts ten years ago. In his lab, he cultured human prostate cancer cells alongside bone marrow stromal cells—the stuff that makes up the marrow’s blood vessels, connective tissue, and other support structure. Sure enough, the cancer cells soon invaded the stromal cells. Something was drawing them there.

With the help of researchers Edi Goihberg and Raghav Joshi, Mathew analyzed proteins that the stromal cells released, hoping to find one that might attract cancer cells. After a series of studies, the team found a likely culprit—fragments of a molecule called fibronectin.

Under normal circumstances, fibronectin plays a role in attracting hematopoetic stem cells, early “universal” cells that can develop into marrow, white blood cells, red blood cells, platelets, and other tissue. Once those stem cells sense the protein, they steer toward its source in the marrow, where they replenish old marrow cells that have died. Prostate cancer cells seem to subvert this process by homing in on the same signal that the stem cells use, said Mathew.

To figure out why, he turned to the tumor cells themselves. Their cell membranes, it turns out, all contain tiny receptors—sorts of molecular “sensors”—that fit the shape of fibronectin perfectly, like a lock and key. When the two bind together, they trigger a wave of signals inside the cell that encourage it to settle down and grow.

The fact that cancer cells share this trait is, in fact, good news, Mathew said. If you can find the mechanism that they use to sniff out bone marrow, it might also be possible to throw a wrench in the works and stop the cancer from spreading in the first place. The most likely way to do that, he said, would be to plug up the receptors on the cancer cells’ membranes, making it impossible for them to sniff out fibronectin and spread in the first place. 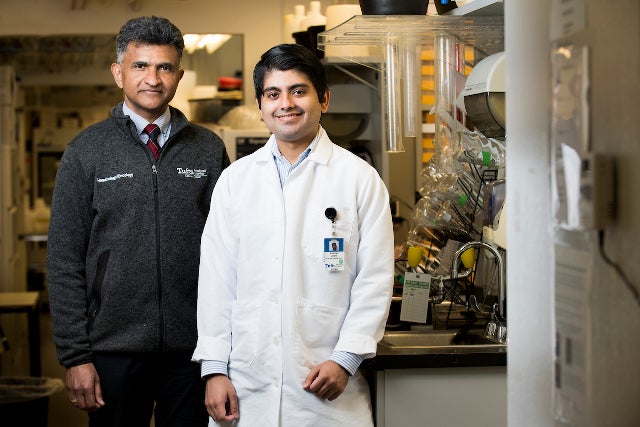 “This is not a home run. We’re only at first base here,” said Paul Mathew, left, with researcher Raghav Joshi. As with any promising treatment, the discovery must go down a long and circuitous road of testing to prove that it works before it can be used widely. Photo: Alonso Nichols
Mathew started to focus on two specific receptors called “Alpha 5 integrin” and “Alpha V integrin.” Both can bind with fibronectin, and both seem to trigger signals in the cancer cells that tell them to settle down in bone marrow. In theory, blocking them should be relatively simple.

Using a lab-made antibody—a molecule that can latch onto cellular receptors—Mathew first blocked the Alpha 5 site, and saw a reduction in the amount of cancer cells that settled in the marrow. Next, he blocked Alpha V integrin, and again saw a moderate reduction. Surely blocking both together would be more effective than either one alone—and sure enough, when he added antibodies for both Alpha 5 and Alpha V, he saw yet another small improvement. But the two together still didn’t show as dramatic a change as he had expected.

As he reaches this point in his story, Mathew turns away from his computer. He’s soft spoken and exudes a quiet confidence that puts visitors immediately at ease. Initially, he said, the solution to his puzzle wasn’t clear. It came as sort of a fluke: one morning, while combing through emails, he noticed one from a biotech company advertising “bispecific antibodies”—single molecules that can bind simultaneously to two different receptors on a cell.

That got him thinking—maybe a single molecule would be even better than using two separate antibodies.

“The alpha 5 and alpha V receptors are very close to each other on the cell membrane,” he said. “It could be that by using two different antibodies, they physically interfered with each other, and just couldn’t fit. There could also be a difference in how the body metabolizes the two different drugs. It may react differently to the two antibodies in a way that makes each of them less effective.”

Mathew contacted the company to create a bispecific antibody, and after testing it in his lab, saw a dramatic reduction in the adhesion and migration of cancer cells toward bone marrow cells. He also noticed that the cancer cells themselves had markedly lower survival rates compared to his earlier tests with individual antibodies.

Much to the research team’s surprise, they also noticed that the bispecific antibody induced unique changes in the cancer cells that the combination of individual antibodies did not. Specifically, “treatment with the bispecific antibody alone triggered the degradation and loss of the target integrins in the cancer cells likely contributing to the significantly improved efficacy over the combination approach,” he said.

The finding was an extremely promising sign, and the approach is now being tested in a range of animal models. Mathew is guarded, though, about the ultimate success of this approach as a treatment. It could be the sort of thing that works in animals, but not in humans, he warned. Alpha 5 and Alpha V receptors also appear in other cells in the body, so the treatment could have unintended side effects in patients.

“This is not a home run. We’re only at first base here,” he said. As with any promising treatment, it must go down a long and circuitous road of testing to prove that it works before it can be used widely. He pauses for a moment, and a wistful look crosses his face. “Life is short,” he said. “Studies take longer than you’d like.”

Then he points then to an article from the Boston Globe tacked on his wall. It’s about a patient of his who he originally gave four months to live, but who today is cancer-free. Mathew treated him with a different technique—a new drug that harnessed the power of the patient’s immune system to eradicate his disease.

That treatment doesn’t work on everyone, though. That’s why, Mathew said, he is hopeful that one day the new approach he’s devised could be used to help those many other patients—ones that couldn’t otherwise be saved.