As the world grapples with the need for sustainable food sources, the Edible Insect Festival puts bugs on the plate 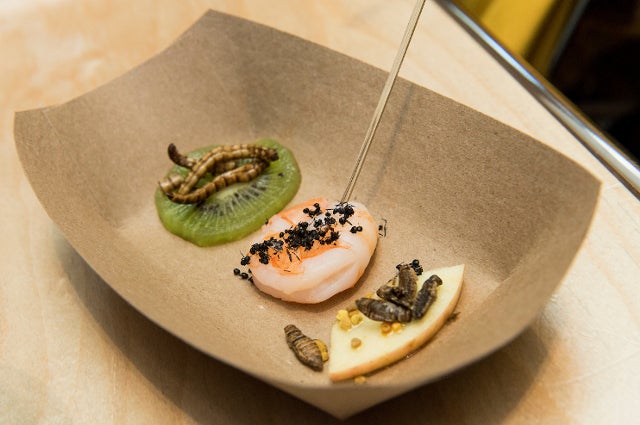 “Who here today is ready to try some bugs?”

Joseph Yoon smiled as he scanned the hands that shot up, confirming he’d come to the right place to “challenge and transform” attitudes about eating insects. As chef and executive director of  Brooklyn Bugs, Yoon appreciates that open mindedness. A buoyant ambassador for edible insects—a culinary choice known as entomophagy—he is on a mission to raise the public’s appreciation for edible insects not just as a nutritious and planet-friendly sustainable food, but also as a delicious treat.

Yoon was at Tufts conjuring tasty foods that incorporate insects as part of the university’s first Edible Insect Festival. The program on April 17 and 18 included workshops, cooking demos, and a multi-course tasting dinner that Yoon catered. 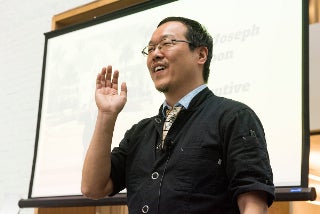 Chef Joseph Yoon of Brooklyn Bugs leads a workshop on the art of cooking with insects at the Edible Insect Festival. Photo: Alonso Nichols
Farming insects for food is a good alternative to raising livestock, Yoon said. He cited a 2013 UN Food and Agriculture Organization report that found one-third of Earth’s land surface and much of our fresh water goes into livestock production; the meat industry is reported to contribute as much as 50 percent of global greenhouse gases—more than all transportation combined. At the same time, the report underscored how global population is expected to reach nine billion people by 2050; feeding the world will require doubling our food supply.

Given this larger context, Yoon is confident that within five to ten years the “necessity for alternative protein sources” will push edible insects into mainstream supermarkets, restaurants, and household pantries. “We’re advocating people incorporate insects in their diet, however they can,” he said.

Sara Lewis, a professor of biology who specializes in firefly research, created the festival after winning financial support from this year’s Tufts Green Fund. “We wanted an opportunity for the Tufts community to be part of a food movement that’s growing, not just in the United States, but about around the world,” said Lewis.

“One of our main goals is to educate students about sustainable food systems,” added Coco Gomez, assistant director of the Environmental Studies Program, who collaborated with Lewis. “What better way to do so than by exploring how insect consumption can help reduce our diet’s carbon footprint? This festival provided a unique opportunity to merge theory and practice.” 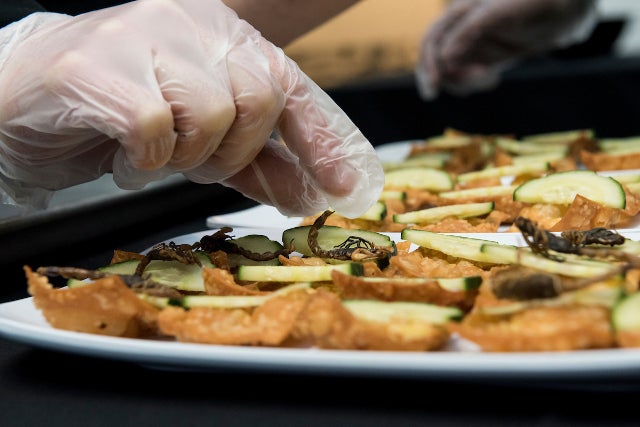 Prepping Manchurian scorpions on beds of cucumber and crispy wontons. Photo: Alonso Nichols
At his cooking workshop, held in the atrium of the Science and Engineering Complex, Yoon gave a glimpse into how to start incorporating insects into one’s diet, starting with a presentation featuring images of a toasted English muffin smothered in black ant butter and “comfort food” like cricket-encrusted fried chicken—“things that will make you consider [insects] as food,” he said. “What if it were plated more nicely and made to look gourmet?” he asked.

To give the audience a chance to experience those possibilities, student volunteers then passed around some of his creations, including Manchurian scorpions with cucumber on fried wontons, superworms on kiwi slices, roasted crickets on honey crisp apple with bee pollen, and, for dessert devotees, bamboo worms with chocolate mousse and sweet wontons.

Bugs in the Classroom

This spring semester, Lewis taught an undergraduate seminar on edible insects for undergraduates, inspired by tasting some delectable grasshoppers served at a firefly conference in Thailand. 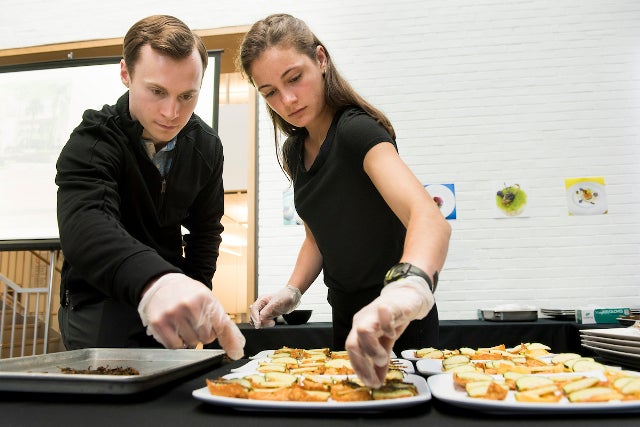 Drew Hotte, A21, and Anna Slager, A22, place Manchurian scorpions on a bed of cucumber and crispy wontons during the workshop on the art of cooking with insects. Photo: Alonso Nichols
For the first time in her teaching career, Lewis brought in snacks for her students. “We started with a low bar—chocolate ‘chirp’ cookies made from cricket flour,” she said. “The students loved them. Then we agreed, OK, we’re now going to eat actual insects. We ate roasted mealworms, chapulines [Mexican grasshoppers], and chili and lime-flavored crickets. In each case, my students were genuinely excited. It’s not a fear factor thing for them at all—they have no fear.”

While some two billion people worldwide already are enjoying insects as part of their daily diet, Americans, Lewis said, have been slow to adopt insect protein due to learned cultural and psychological phobias. “The big barrier in the United States is the ick factor,” she said. “We enjoy lots of insect relatives like shrimp and lobsters, but they’re basically sea insects. So you can think of insects as land shrimp. At this festival we definitely wanted to talk about their nutritional and environmental benefits, but also show people that insects taste great and look really beautiful.” 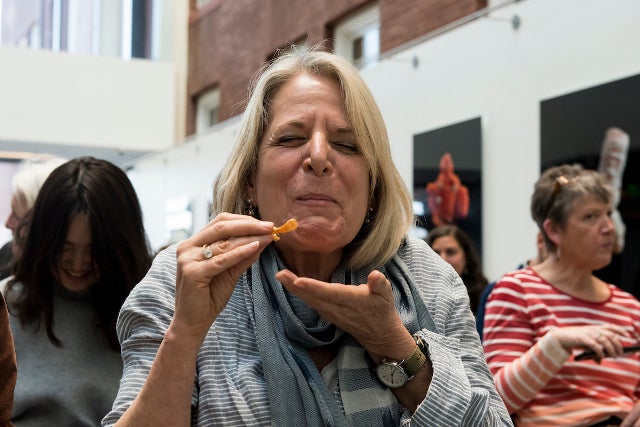 Susan Russinoff, senior lecturer in philosophy, reacts as she takes a bite of Manchurian scorpion on a bed of cucumber and crispy wonton. Photo: Alonso Nichols
Tufts, said Lewis, is also well positioned to be a leader in the edible insect movement. Joel Mason at the Jean Mayer USDA Human Nutrition Research Center on Aging at Tufts recently brought together a group of people from government, industry, and academia to outline research questions on insect nutrition and the role they should play in the American diet. “Tufts absolutely can move the needle on edible insects,” Lewis said.

For Yoon, that shift can’t come soon enough. “This is a movement with far larger implications than just dietary preferences,” he said. “What if you knew that adopting this practice was better for the world and better for future generations?” The world of edible insects “can have a huge impact . . . on how we conquer global challenges to make the world a better place,” he added. 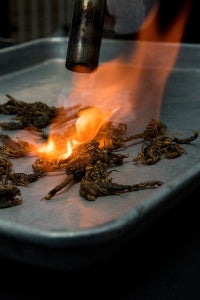 Chef Joseph Yoon prepares Manchurian scorpions for an appetizer during a workshop on the art of cooking with insects. Photo: Alonso Nichols
That change won’t happen, though, if it’s limited to just the foodies. That’s why Yoon is taking the message on the road, touring college and university campuses around the country. “We need you—Tufts University, professors, students,” he said. “This is a movement that requires new words, new chefs, new techniques, new policies and regulations, new ideas. . . . Every single academic department can be vital in the normalization of eating insects.”

That appeal was not lost on Colin Orians, a professor of biology and director of the Environmental Studies Program, who gamely tried every insect sample.

“I was impressed and surprised by the distinct flavors of each insect,” he said. “The toasted superworms complemented the flavor of the kiwi, and the tangy flavor of the ants added a nice spice to the shrimp. Later I tried one of the chapulines alone and was pleasantly surprised.” Texture is always key with food—and insects tend to be crunchy.  “I cannot think of very many people who don’t enjoy something crunchy,” he said.

Orians credited Yoon with “encouraging us to try something that we might not otherwise,” he said. “I certainly don’t have the same hesitation to consume arthropods as I have had in the past.”