Spirituality at Tufts: Hillel and Beyond

For Jewish students at Tufts, social justice and social life make for a meaningful community 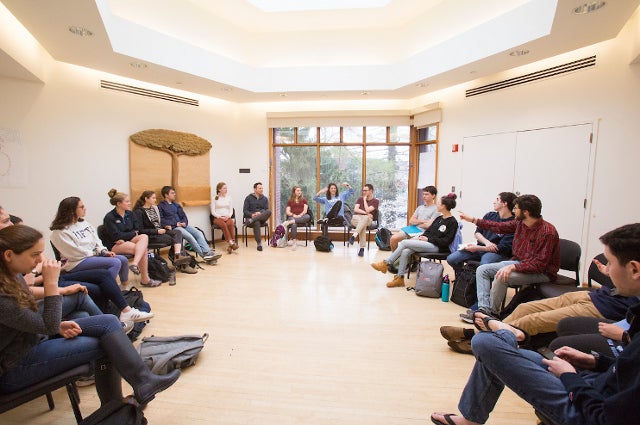 Finding community is always a key part of the student university experience, and for many at Tufts that centers around spirituality. With many spiritual traditions represented on Tufts’ three campuses, students can make deep and abiding connections, enriching their lives and the university's. In this occasional series, “Spirituality at Tufts,” Tufts Now explores the many and varied traditions that students take part in.

By dinnertime on a recent Friday at the Granoff Family Hillel Center, the home of the Jewish community at Tufts, about sixty-five students will arrive for a meal of moussaka. Chef David Walls is busy preparing it in the center’s kosher kitchen, spreading filling into large sheet pans with the help of a frying pan he’s using as an oversized spoon.

The meal will follow student-led religious services held in each of the center’s two chapels, part of the weekly observance of Shabbat, the Hebrew name for the Sabbath Jews observe from sunset on Friday to nightfall on Saturday. Hosting some sixty-five students for dinner is a big undertaking, but some nights will have twice that many guests. Tufts Hillel projects it will have served 2,000 Shabbat meals by the end of the 2018-19 school year.

Elsewhere, the center is humming with activity in the days approaching Passover, which started on the evening of Friday, April 19. Pairs of students and staff sit in leather chairs in the sunlit library, deep in conversation. Shana Burstyn—whose businesslike title of Operations and Data Manager belies her effervescent and welcoming presence—is enthusiastically waving other students toward a Lunch & Learn event with the Arab-Israeli Rhodes Scholar Lian Najami. In front of Burstyn’s desk is more food—macaroni and cheese, salad, and berry shortcake—and on the wall behind it is a poster displaying four Hebrew letters that spell ahava, which means “love.” 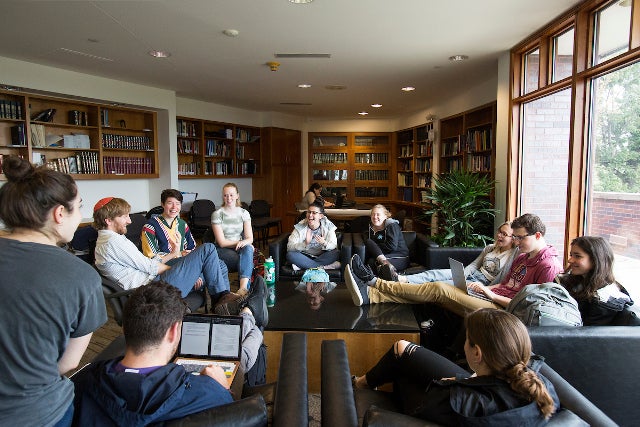 Rabbi Jordan Braunig leads a meeting of Hillel’s community building fellows on an afternoon during Passover. “The purpose of my program is to create meaningful Jewish experiences all around campus, to decentralize Jewish life in some way,” he said. Photo: Alonso Nichols
“Hillel” is nearly synonymous with campus Jewish life at the more than 550 colleges and universities where Hillel International has a presence. At Tufts, where an estimated twenty percent of the undergraduate student body is Jewish, Hillel’s mission is far broader than offering Jewish students a place to worship—it is to connect with and welcome each Jewish student, whether they want to participate in activities within the building or explore Judaism in other ways. Hillel also welcomes non-Jewish students to learn more about Jewish culture and traditions, and partners with other student groups, including the interfaith community and organizations focused on community service.

Through multiple channels, Hillel made contact last academic year with 84 percent of Jewish undergraduates at Tufts. “Celebration of the many ways in which a Jew can live a Jewish life is what we’re about,” said Rabbi Dr. Naftali Brawer, the Neubauer Executive Director of Tufts Hillel. Brawer, who is nearing the first anniversary of his arrival on campus, is an ordained Orthodox rabbi with a background in corporate social responsibility as well as congregational leadership. 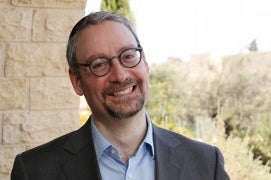 Rabbi Dr. Naftali Brawer. Photo: Alonso Nichols
Although Brawer can’t attend the Lunch & Learn, he greets and briefly chats with the students, who call him by his first name. Brawer’s approachable manner extends to students’ parents as well; he conducts regular video conference calls as a way to keep families connected to Hillel.

Everything at Tufts Hillel is student-led and staff-supported. Lauren Bloom, the center’s assistant director and a nearly twenty-year presence at Tufts Hillel, oversees a vast array of student-led social justice-oriented programs.

“Read by the River” is an annual literacy carnival that serves more than 500 elementary school students in Medford and Somerville, for example, and “Challah for Hunger” involves students baking creatively flavored challah bread, then selling it at the campus center to raise money to help alleviate hunger. The Cummings/Hillel Holocaust and Genocide Education Program, another student-led initiative, engages the Tufts community through speakers and events to raise awareness about Holocaust history as well as genocide prevention.

“Social justice is the ethos of the Tufts campus, so it makes sense that our focus on social justice work on campus really speaks to the students, both Jewish and non-Jewish,” Bloom said.

Joe Philipson, A15, who graduated with a political science and religion double major, embodies this ethos. He connects his work as a paid intern with the Cummings/Hillel program and the Mayerson Social Justice Fellowship to his post-college career as a social impact advisor at a media company in Los Angeles.

“I had always been passionate about social justice,” Philipson said. At Tufts Hillel, he learned to bring Jewish values to a wide swath of issues. Now in his professional life, he said, “I want to empower people to take ownership of their values and their belief systems, and then integrate them into their lives.”

Social life also ranks high alongside social justice at Tufts Hillel—exhibit A: Philipson met his long-term girlfriend, Kaley Leshem, A15, through his Hillel activities. An annual semi-formal is a highlight of the social calendar, and performances by Shir Appeal, a Jewish a cappella group, bagel brunches, and regular gatherings at the Tamper coffee shop on Boston Avenue, invite students to connect and have fun in a Jewish context.

Jewish holidays are additional opportunities for creative celebration. The Passover celebrations started with events such as a “Chocolate Seder,” focused on women’s spirituality, and a “Floor Seder,” designed to explore the holiday’s themes of freedom and redemption as attendees sat and relaxed on the floor.

If some students don’t want to come to Hillel, Hillel will come to them. Dana Baxter, A21, a biology major, is a Hillel Community Building Fellow, one of twenty paid interns who are tasked with reaching out to Jewish students who, for a variety of reasons, don’t engage in programs in the Hillel building. The fellows take students out for coffee and conversations—chats that often lead to the development of new and unique programs, like a potluck supper of family recipes to take place in late April.

“It’s been awesome to get to reach out to people I might not know otherwise and get to know more about them and their Jewish background,” said Baxter, who also performs with Shir Appeal and oversees the bi-weekly “Challah for Hunger” bakes.

The fellows are supervised by Rabbi Jordan Braunig, director of the Hillel’s Initiative for Innovative Community Building, who says all those cups of coffee enable a broader segment of the Tufts Jewish community to feel they have a place to explore their faith on campus.

“It’s great to have this beautiful building, but a building has doors,” he said. “For some students, walking through a doorway into a religious building on campus can feel intimidating. The purpose of my program is to create meaningful Jewish experiences all around campus, to decentralize Jewish life in some way.”

Braunig is found as often at the campus center as in the Hillel building—in fact, his nickname is the “Rabbi in Rez-idence” because of his ubiquitous presence in The Rez coffee shop. Students can stop and sit with Braunig for a moment of reflection, venting, or just chit-chat. They can also join him during “10 at 10,” a 10-minute meditation he leads each Tuesday and Thursday at 10 a.m. in the interfaith Goddard Chapel.

Recently, a student sat down next to Braunig to share that he had come from an exam that was more challenging than expected. Braunig later reflected on that simple exchange, explaining how simply being there for a student having a tough day is the kind of moment that keeps him inspired.  “That kind of conversation,” he said, “causes holiness to descend upon the world.”

What Should You Do and Why?