Crime and Too Much Punishment

The criminal justice system has become fixated with assigning moral blame and imposing retribution, and that’s not right, says a professor

Currently there are some 2.3 million Americans in prison—locked away for offenses from possession of marijuana to murder—and in recent decades, sentences have become increasingly long. Once they are released from prison, convicted felons often report they have to deal with the stigma of their convictions; many report bias in employment long after release from prison, and ongoing psychological stress from imprisonment.

Those are some of the consequences of a trend in the last thirty-five years to mete out increasingly harsh punishment to convicted criminals. It used to be that the prison system was at least nominally focused on rehabilitation; now it’s almost purely punishment and retribution.

Erin Kelly, a professor of moral philosophy in the School of Arts and Sciences, focuses some of her research on the philosophies of punishment and the notion of moral desert—that is, deserving consequences for your actions. “These are questions that I’ve been thinking about for many years, and I started thinking about them through the lens of criminal justice,” she said.

Now she’s written a book about it, The Limits of Blame: Rethinking Punishment and Responsibility (Harvard University Press). In it, she writes that “a punitive, moralizing conception of individual responsibility provides, at the very least, a cover for public acceptance of a harsh and unforgiving punishment culture.” We are, she says, adding an unnecessary layer of moral blame to criminal conviction—and doing serious harm in the process.

Kelly will give a talk on the topic on May 3 at the TEDxCambridge event at the Opera House in Boston. Tufts Now recently talked with her about crime, punishment, and social justice.

Tufts Now: Retribution is not a new idea as a response to acts that are considered violations of social norms. What’s changed now?

Erin Kelly: Retribution is an idea that has gained traction during the same period in which we’ve seen the rise of mass incarceration in America, and I think we should ask why that is. There was a political shift, as we moved away from things like rehabilitation and reasonable public safety measures or deterrence, to thinking more about “giving people what they deserve.”

It was understood in this retributivist way, where somebody has committed a crime, then they should be hurt in a proportionate way, as though that balancing of the scales of retributive justice, like eye for an eye, is something that we could practice through the criminal justice system.

I recognize that in the public discourse there is a lot of fear, that people are concerned about their safety—to some extent rationally and to some extent irrationally. But I think people are being exploited by politicians and policymakers and, frankly, vested corporate interests like for-profit prison companies. It’s this idea that criminal lawbreakers are bad people, and we should make them pay. That idea becomes very appealing in this political context. And it’s dangerous.

I think there are serious questions about whether retribution is the best rationale for criminal punishment, and if you do think it is—and I don’t—there is a real question whether we can fairly put that idea into practice, given that the people who seem most eligible for punishment may not seem to be the most deserving—they are often the most disadvantaged in society. 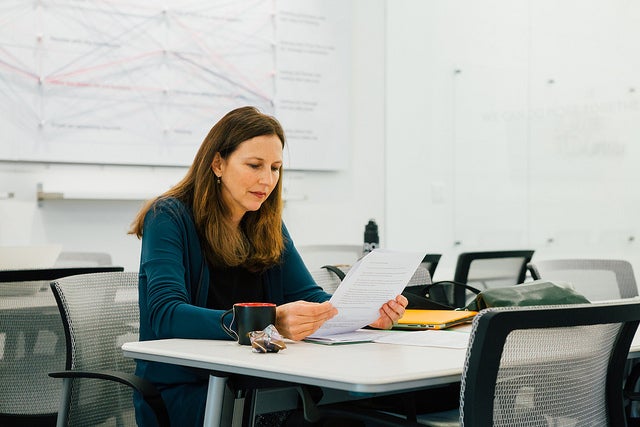 “If the law is convicting people based on evidence that they have done certain actions, we shouldn’t be drawing conclusions, based on that finding, about their character, how blameworthy they are, and what they deserve,” said Erin Kelly. Photo: Bearwalk Cinema

You write about some offenses where there is no moral component—things like minor possession of recreational drugs or a parolee missing a check-in with a probation officer—and that those people should not be incarcerated.

And then there’s a question of whether people who commit criminal acts morally deserve to suffer—do they deserve retribution, and would that justify the use of incarceration? Maybe we shouldn’t be looking to impose just deserts on people who have done awful things. Maybe a better approach is to ask if public safety requires that we incapacitate some people who are a danger to society, and if so, it may not be important that they deserve it in a moral sense.

You write about a father whose daughter was murdered, and who discovered that the killer had a horrific upbringing, which softened his views about retributive punishment. What does that show?

I think the fact that there are examples of people who don’t subscribe to the retributive principle and find other ways to make peace with or reckon with wrongs that have been done against them, show us that there are a variety of possible responses to criminal victimization. The state should be more neutral between those responses. It should not pick the retributive view and represent that as the point of view of justice that all of society subscribes to—because I don’t think all people do subscribe to it.

But there need to be consequences for criminal actions. 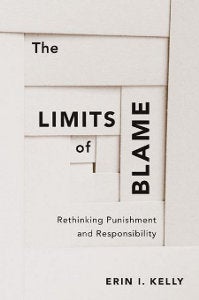 I think that in a just society, a government should take some steps to make sure that people do not violate each other’s rights, both to intervene to stop it when it’s happening and to take steps to prevent and discourage people from committing acts of that sort. But that doesn’t take us into the territory of moral desert and retribution.

Being “tough on crime” is often a gambit invoked by politicians seeking election—should that make us suspicious of the idea?

The retributive idea of criminal justice is very appealing to many people, but it keeps them from thinking about who’s getting punished and why those people are committing the crimes they are committing. For that reason, it takes us off track from thinking about shared responsibility and social justice. Collective failures to deliver health care, education, and socio-economic justice are pushed out of view, and the idea of individual responsibility takes center stage, in a way that seems to justify a practice of warehousing people, whose lives are being ruined.

I’m trying to get people to think more critically about who we are locking away, why we are locking them up, and whether we have good reason to do that. I think that the problems of criminal justice and the causes of crime are connected with broader issues of social justice that have to be addressed if these problems are going to be resolved. The criminal justice system cannot resolve the problem of crime on its own.

You’d like to separate moral blame from criminal conviction. Why?

I think we should be more modest in the conclusions we draw about people who have committed crimes, and less moralistic, and hopefully more restrained in our reactions.

Criminal law focuses on whether you committed a crime—did you commit a criminal act? That’s fine, in the sense that there are certain things that people shouldn’t do. We need some way to figure out whether people have done them, and if they have, to stop them from doing these things. We should also make it clear that no one should do these things.

But if the law is convicting people based on evidence that they have done certain actions, we shouldn’t be drawing conclusions, based on that finding, about their character, how blameworthy they are, and what they deserve. None of that is really critical to the legal finding that they have committed a crime. Instead, we are simply making inferences from their criminal guilt to conclusions about who they are and how to assess them as moral persons.

How does this topic fit with your work as a moral philosopher?

One of the things I’m doing is using philosophy to think about social problems and to try to challenge people to think a little more critically about what in their moral paradigm they take for granted. Is it really true that we have to think about justice in retributive terms and, if you assume that that’s the right model, why do you think that? I’m trying to shake people up a little bit to think about things differently. There is a lot of resistance out there, the ideas are controversial, and there are some very thoughtful people out there who think about these things in a different way than I do. These aren’t easy questions to answer.

Bringing the Incarcerated Millions into View