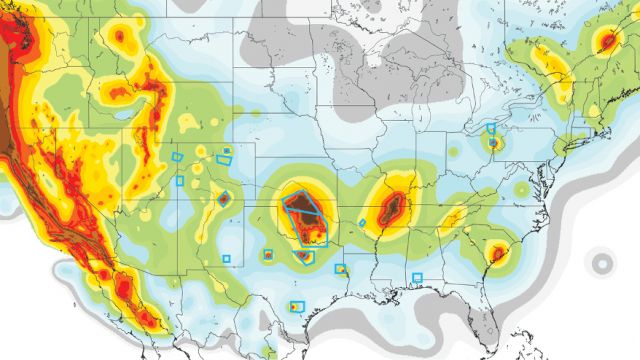 MEDFORD/SOMERVILLE, Mass. (May 3, 2019) — Using data from field experiments and modeling of ground faults, researchers at Tufts University have discovered that the practice of subsurface fluid injection used in ‘fracking’ and wastewater disposal for oil and gas exploration could cause significant, rapidly spreading earthquake activity beyond the fluid diffusion zone. Deep fluid injections -- greater than one kilometer deep -- are known to be associated with enhanced seismic activity—often thought to be limited to the areas of fluid diffusion. Yet the study, published today in the journal Science, tests and strongly supports the hypothesis that fluid injections are causing potentially damaging earthquakes further afield by the slow slip of pre-existing fault fracture networks, in domino-like fashion.

The results account for the observation that the frequency of man-made earthquakes in some regions of the country surpass natural earthquake hotspots.

The study also represents a proof of concept in developing and testing more accurate models of fault behavior using actual experiments in the field. Much of our current understanding about the physics of geological faults is derived from laboratory experiments conducted at sample length scales of a meter or less. However, earthquakes and fault rupture occur over vastly larger scales. Observations of fault rupture at these larger scales are currently made remotely and provide poor estimates of the physical parameters of fault behavior that would be used to develop a model of man-made effects. More recently, the earthquake science community has put resources behind field-scale injection experiments to bridge the scale gap and understand fault behavior in its natural habitat.

The researchers used data from these experimental field injections, previously conducted in France and led by a team of researchers based at the University of Aix-Marseille and the University of Nice Sophia-Antipolis. The experiments measured fault pressurization and displacement, slippage and other parameters that are fed into the fault-slip model used in the current study. The Tufts researchers’ analysis provides the most robust inference to date that fluid-activated slippage in faults can quickly outpace the spread of fluid underground.

“One important constraint in developing reliable numerical models of seismic hazard is the lack of observations of fault behavior in its natural habitat,” said Pathikrit Bhattacharya, a former post-doc in the department of civil and environmental engineering at Tufts University’s School of Engineering and lead author of the study. “These results demonstrate that, when available, such observations can provide remarkable insight into the mechanical behavior of faults and force us to rethink their hazard potential”. Bhattacharya is now assistant professor in the School of Earth, Ocean and Climate Sciences at the Indian Institute of Technology in Bhubaneswar, India. 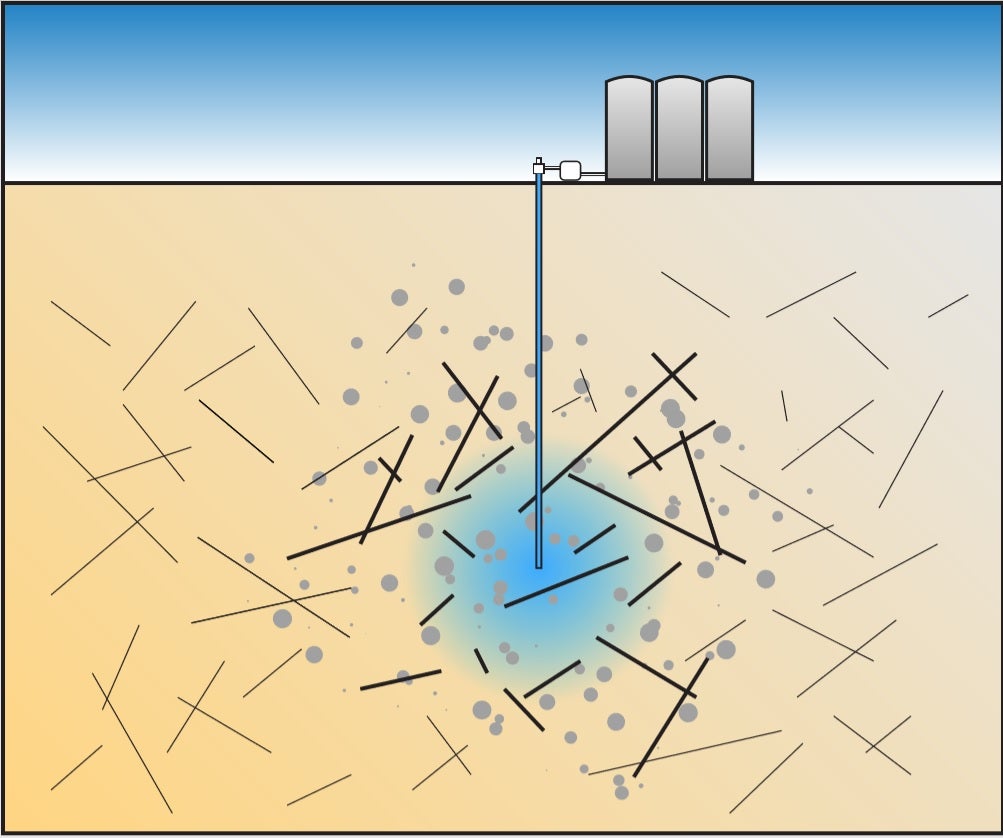 Injection of wastewater kilometers below ground leads to a region of pressurized pore fluid in rock (blue shade). Fluid injection can induce the slow rupture of faults (thick black lines) that propagates faster than the fluid can migrate. Stress from this fault slip may be the leading cause of an expanding cloud of seismicity (grey circles). Thin black lines indicate pre-existing, but not-yet-activated faults.
The hazard posed by fluid-induced earthquakes is a matter of increasing public concern in the US. The man-made earthquake effect is considered responsible for making Oklahoma— a very active region of oil and gas exploration—the most productive seismic region in the country, including California. “It’s remarkable that today we have regions of man-made earthquake activity that surpass the level of activity in natural hot spots like southern California,” said Robert C. Viesca, associate professor of civil and environmental engineering at Tufts University’s School of Engineering, co-author of the study and Bhattacharya’s post-doc supervisor. “Our results provide validation for the suspected consequences of injecting fluid deep into the subsurface, and an important tool in assessing the migration and risk of induced earthquakes in future oil and gas exploration.”

Most earthquakes induced by fracking are too small -- 3.0 on the Richter scale -- to be a safety or damage concern. However, the practice of deep injection of the waste products from these explorations can affect deeper and larger faults that are under stress and susceptible to fluid induced slippage. Injection of wastewater into deep boreholes (greater than one kilometer) can cause earthquakes that are large enough to be felt and may cause damage.