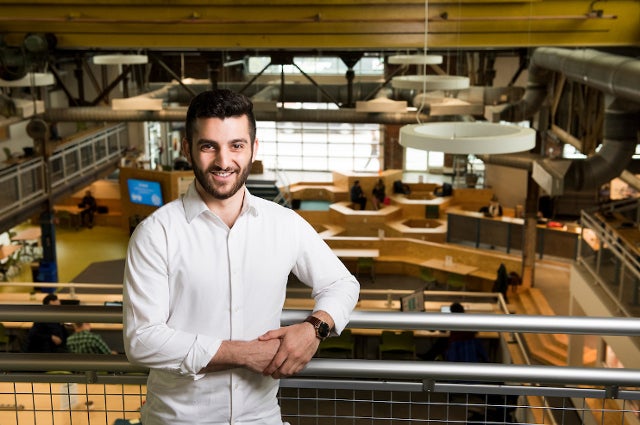 The world is running out of clean water. Currently, some 2.7 billion people face water shortages at least a month out of the year—and not just in developing countries, but also in places like California and Arizona. At the same time, industries create billions of gallons of polluted water daily from food processing, gas and oil production, and mining.

“The question is, what happens to that water on the output side,” said Alex Rappaport, E17, MSIM18. “You can either reuse it, or you can throw it away.” Too many companies are doing the latter, investing money and resources in carting away polluted water to be treated, or worse, dumping it into municipal sewers or rivers.

Rappaport is spearheading a way to reduce that waste through his new company, ZwitterCo, which uses technology developed by Tufts chemical and biological engineering assistant professor Ayse Asatekin to create a revolutionary membrane-based treatment system that can clean polluted water so it can be reused, saving money and resources in the process.

The company’s name is not a riff on a certain social media site, but rather a reference to zwitterions, molecules with unique properties to attract water and reject other organic compounds. “The material engages with water at a much higher affinity than it does with the fatty or greasy compounds that can get stuck to conventional membranes and cause fouling,” said Rappaport. “That makes them much more cost-effective for water recycling.”

Rappaport developed a passion for environmental issues while growing up outside Washington, D.C., where he worked as a river raft guide on the Potomac. “I grew up on a river and cherished my time outdoors,” he said. “Giving back to the environment became a lifetime pursuit.” When he came to Tufts as an undergrad, however, he struggled at first to find a way to translate that interest into action.

“He was so enthusiastic, and had all these big thoughts about sustainability,” said Asatekin, who was Rappaport’s first-year advisor, “but I don’t think he had found his passion.”

Rappaport first majored in chemical engineering and then switched to environmental engineering, but hankered to find a more practical way to make a difference. “I was very hungry to see some application of creativity,” he said.

He found it his senior year at Tufts Entrepreneurship Center (TEC), where he helped cofound a new student entrepreneurship club called the Venture Lab. In addition to providing co-working space for student projects, the club began holding pitch nights, coaching sessions, and cocktail meet-and-greets, eventually growing to a network of more than 100 budding entrepreneurs, including undergrads, grad students, and Ph.Ds. Most of them had one goal—to win the Tufts $100k New Ventures Competition, a TEC contest that provides cash to winning teams to make their startups a reality. “We crushed the 100k that year,” said Rappaport. “Almost every team that won was a Venture Lab team.” 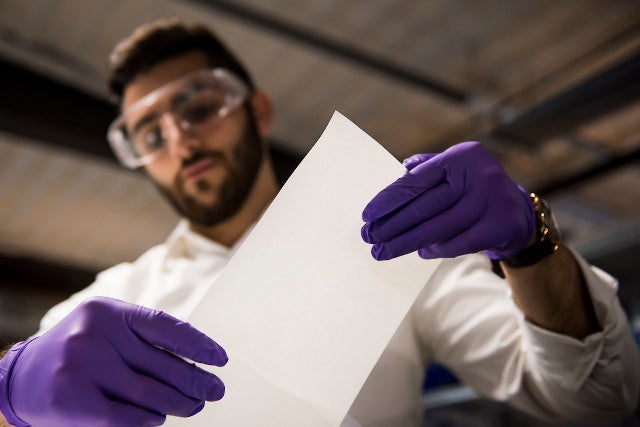 “We have five Tufts degrees on our team, Tufts technology, Tufts investors, Tufts advisors, and all of our network and learning on how to do this came from Tufts,” Alex Rappaport said, here holding a sample of the membrane. “We are a true Tufts company.” Photo: Alonso Nichols
Looking to develop his own killer business idea, Rappaport applied to Tufts Master’s of Science  in Innovation and Management (MSIM) program after graduation. Around the same time, he discovered the Tufts Office of Technology Transfer and Industry Collaboration, which licenses inventions by Tufts researchers for commercialization. Looking for a product with a focus on sustainability, Rappaport came across Asatekin’s research on zwitterions, molecules that have both negatively charged and positively charged components, making them very attractive to water and resistant to organic compounds like oil.

In head-to-head tests using oily water, traditional membranes saw a decrease in water flow of 50 to 60 percent in just a few hours; the zwitterion membranes, however, saw no decrease even after a week. In addition, by combining the zwitterions with other molecules, Asatekin has been able to create very small channels, only a nanometer or two in size, for fine filtering of very polluted water.

When Rappaport asked to use her technology to create a company, Asatekin was thrilled. “As engineers, you do all of this work, and you really want it to result in a project that has true impact on the world,” she said.

Rappaport developed the idea in the MSIM program, partnering with fellow student Aditi Deorukhakar, MSIM18, and with mentorship from Tufts faculty. MSIM director Kevin Oye challenged students to reach out to 100 customers to generate knowledge for their projects, and Rappaport and Deorukhakar took that to heart, cold-calling companies in a wide range of industries and attending a water conference in Texas together. 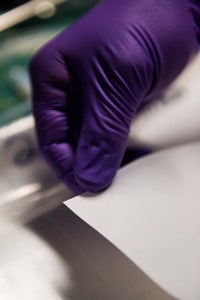 A closeup of the membrane being developed by ZwitterCo. Photo: Alonso Nichols
They discovered that if they could deliver a membrane system that would treat wastewater for a monthly service fee, then companies might save money and water without a huge up-front investment. “We realized that the first business model was a service model, designed to be a low-risk opportunity for operators to significantly reduce their water handling costs,” Rappaport said.

Last April, he and his team prepared their presentation for the 100k New Ventures Competition, delivering a passionate and polished pitch that tied for first place in their division. “We had done the right level of research to not just be a well-crafted story, but also something where all of the details were there,” Rappaport said.

Since then, the company has continued to refine its idea, moving into Greentown Labs in Somerville, the largest clean-tech incubator in the U.S. It recently won a $65,000 catalyst grant from the Massachusetts Clean Energy Center and has split a $225,000 National Science Foundation grant with Asatekin’s lab to test new compounds.

In addition, the company has brought on Tufts alum Christopher Drover, an industry expert in wastewater treatment, and raised more than a million dollars, much of it from a network of Tufts angel investors. “We have five Tufts degrees on our team, Tufts technology, Tufts investors, Tufts advisors, and all of our network and learning on how to do this came from Tufts,” Rappaport said. “We are a true Tufts company.”

The company is currently working with a food and beverage company to institute a paid pilot project onsite to test the membranes in real-world conditions. If successful, Rappaport hopes that the technology might soon be implemented in other industries around the country. “We will change the way industry manages water,” said Rappaport, “and make it easier and more financially viable for them to do the right thing.”

Michael Blanding is a freelance science writer based in Boston.

Hydration: What to Know for Hot Weather