Abani Patra, who has been at the forefront of the rapid growth of big data, starts at Tufts on August 15 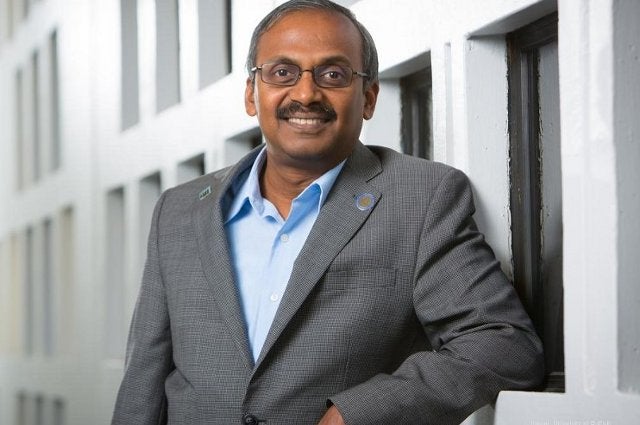 Abani Patra, founding director of the Institute for Computing and Data Sciences at the University of Buffalo, has been appointed the inaugural director of the Data Intensive Studies Center (DISC) at Tufts.

Since 2014, Patra has guided and shaped the growth of the University of Buffalo institute into a multifaceted, high-performance computing, data, and visualization resource. It fosters interdisciplinary research and includes Ph.D. and M.S. programs and the Center for Computational Research, one of the most powerful university-based supercomputing facilities in the nation.

He joined the University of Buffalo Department of Mechanical and Aerospace Engineering in 1996 and went on to become founding director of its Ph.D. program in computational and data-enabled sciences and engineering. He has also held appointments at the U.S. Department of Energy and the National Science Foundation, managing research programs related to applied mathematics, computing, and cyber-infrastructure.

Patra has been at the forefront of the rapid growth of big data, in which researchers across many disciplines integrate massive datasets and computational techniques to develop far-ranging innovations. Patra’s contributions have had wide-ranging impact, including in the field of geophysical modeling. His work has led to development of tools now used by thousands of researchers around the world to characterize, predict, and simulate physical events such as landslides and volcanic avalanches.

“We are thrilled to have Dr. Patra help implement what will be an exciting and versatile resource for Tufts researchers and students,” said Deborah Kochevar, provost and senior vice president ad interim. “He has a distinguished academic career and is highly regarded for his collaborative approach to research and pedagogy. The idea for DISC has always been that it serves as a catalyst in the science of data for faculty, students, and staff from across the university. Vice Provost Simin Meydani and a committed group of DISC steering committee faculty members did an outstanding job of finding our talented inaugural director.”

At Tufts, Patra will be the first director of DISC, an interdisciplinary hub developed to connect data science experts with scholars who want to use data-intensive techniques to advance their work. The center will leverage existing strengths at Tufts and catalyze new strategic opportunities for data applications.

Patra, who will start on August 15, will hold a dual appointment as professor in the Department of Mathematics and the Department of Computer Science. He also will soon be nominated to hold the inaugural Stern Family Professorship.

DISC will first be located in the Science and Engineering Complex. Later, DISC will move to the new Joyce Cummings Center; construction on that academic building, on College Avenue, begins this summer.

Patra said he was impressed by the steps Tufts has already taken to advance its vision for DISC. In November 2017, the university hosted a symposium bringing together distinguished speakers from industry, government, and higher education, covering topics ranging from data science and computational science in health care to the ethical use of data.

“What I liked very much when I came to Tufts to visit was the broad range of people that were interested in talking with me about data,” Patra said. “I spoke to everybody from classics and history to mathematics. That diversity of interest that people presented was very attractive.”

Patra said that in his first year he hopes “to build bridges and synergies. Tufts has a really superb collaborative environment, and that’s a tremendous strength,” he said. “I also look forward to this extraordinary opportunity to create a powerful new institute from scratch; it’s the kind of challenge I truly enjoy.”

Patra, who received a Ph.D. in computational and applied mathematics from the University of Texas at Austin, said he became fascinated with data analytics as he was building his academic career in computational mathematics. By working on more complicated problems, “it became obvious that the data was where the biggest challenges were,” he said. “And maybe that’s the way I see myself. I like to do problems that have high impact, and data science—all the methodologies that are driven by data—is where you can have the most impact.”

Data, thoughtfully harnessed and channeled, has the tremendous potential to broaden and deepen scholarship and research, he said. There’s no better place to do that than at universities such as Tufts, where community members think critically across disciplines.

That inquisitiveness and free sharing of ideas, he said, will be central to DISC’s growth and vitality. “At DISC, you can encourage those conversations that lead to fresh new ideas. You will have the critical thinking that is needed to integrate the different disciplines and to think about how what we do affects society. That’s where I think Tufts has a huge role to play, and no one else can do it as well.”