Student-athletes compete in the classroom and on the field, so a lacrosse player came up with a mindfulness program to relieve the stress 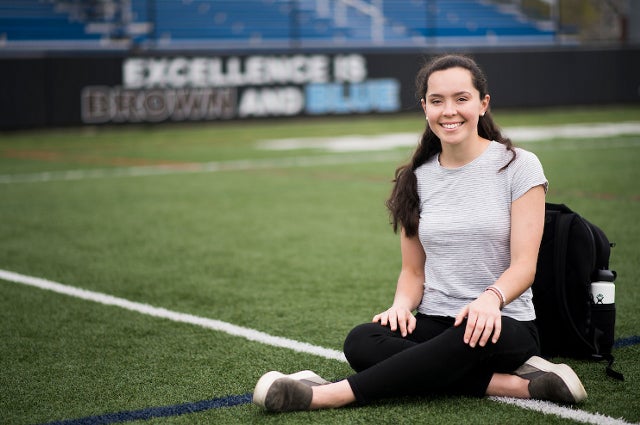 There’s pressure, and then there’s pressure. As a student-athlete, Audrey Evers, A19, knows all about that. When she was a freshman member of the women’s lacrosse team, she found herself thrust into the position of starting goalie the entire season. She continued as a starter for the subsequent three years—and is now a key part of the nationally ranked team that’s headed to the NCAA tournament.

All that was on top of a double major—psychology and community health—with the attendant stress. That experience led her ultimately to the topic for her senior honors thesis: a research study of a mindfulness program for student-athletes.

Evers co-led a pilot program with thirty student athletes last fall, and the results were striking. The participants reported that after only four sessions, their mental health improved, they were able to sleep better, and they experienced less stress.

At Division I schools, athletes may take light course loads. But at a Division III school like Tufts—especially in the New England Small College Athletic Conference (NESCAC), which includes schools like Amherst and Williams—athletes take just as difficult a course load as other undergrads.

“We hold ourselves to an incredibly high standard of academics and an incredibly high standard of athletics,” Evers said. “The average GPA for student-athletes at Tufts is higher than for non-athletes. That might be at the core of why there is suffering in the group, because everyone wants to be great at everything they do, resulting in a lot of stress.”

Evers had been interning at the campus Health Service when Ian Wong, director of health education there, asked her to look into what could be done for Tufts’ student-athletes. She found a mindfulness program developed at the University of Southern California, but instead of just offering the program at Tufts, she decided to test it and see how well it worked.

Working with Adolfo Cuevas, an assistant professor of community health, on her senior honors thesis, she started to devise a study, revising the USC program to fit better with a Division III school like Tufts. She also got help from Jessica Somogie, a master’s candidate at the Eliot-Pearson Department of Child Study and Human Development, whom she met while interning as a research fellow at Cambridge Health Alliance’s Center for Mindfulness and Self-Compassion. 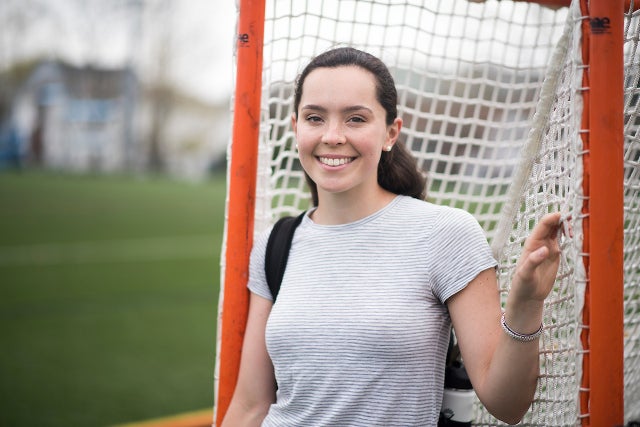 “We hold ourselves to an incredibly high standard of academics and an incredibly high standard of athletics,” Audrey Evers said. Photo: Alonso Nichols
Evers recruited the thirty student-athletes and administered anonymous questionnaires about the students’ mental health, mindfulness abilities, and stress before the four-week program and after. One thing that shocked her was the number of student-athletes suffering from symptoms of anxiety and depression. “I knew people were struggling, but I was shocked to see it on paper,” she said.

The group met on four consecutive Monday evenings for the one-hour programs. They were led in guided meditations by Somogie, reflected on what was happening in their lives, and focused on particular topics each week—like mindfulness in the body and building a practice.

Participants also received the mindfulness app Headspace, so they could listen to guided meditations on their own, paid for by a grant from the Tufts Undergraduate Research Fund. During the week, many participants did walking meditation. “We have very little spare time, but we always have to walk somewhere on campus,” Evers said.

After the four weeks were up, the students took the same questionnaire to measure their well-being—and were appreciably healthier. Their scores showed a statistically significant improvement in mental health, a statistically significantly improvement in mindfulness ability, and a decrease in stress. And even though improving sleep wasn’t a goal of the program, 55 percent of participants reported an improved ability to fall asleep and stay asleep, Evers said.

What they took away was valuable, she said—they learned about how to handle pressure skillfully. And they learned that they are not alone, Evers said. “We had an open-ended question in the survey at the end where a lot of people said, ‘I realized I need help.’ And others said, ‘I went to mental health services for the first time.’ That alone is a huge first step,” she said.

“The point of mindfulness at the end of the day is just awareness,” Evers said. “If you can become a little more aware of how you are feeling, maybe it makes you realize you need more help.”

The program’s value could be summed up in the experience of one of the participants. “One student-athlete told the group how their team had just lost a big game,” Evers said. “Following the loss, this participant carried the weight of the loss, but shared that they were able to go home, put on Headspace, and tell themselves I’m OK. That’s everything to me,” Evers said.

Cuevas said he was impressed with Evers’ efforts. “While the findings still need to be replicated and the approach fine-tuned, Audrey’s intervention holds remarkable promise that there are innovative, effective ways to help address the health and well-being of athletes across campuses,” he said.

What is Evers’ main takeaway? “We need to recognize that being a D3 student-athlete in the NESCAC often means twice the pressure,” she said. “We have to do things intentionally to address these unique stressors. That may be mindfulness programming, and it could also be structural institutional changes.”