Want to Build a Hexapod Robot? 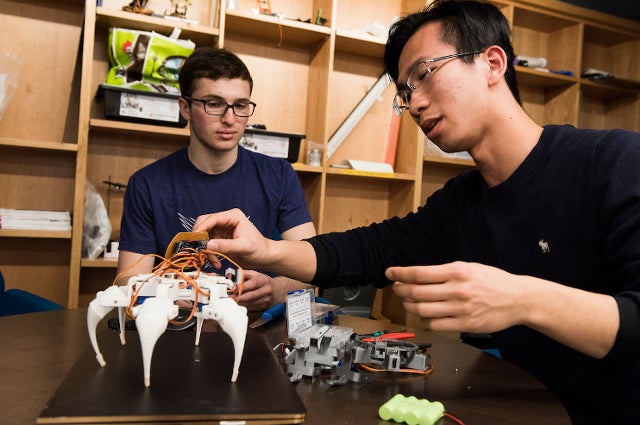 Elias Marcopoulos, E19, a triple major in computer science, English, and applied physics, had been making their own Rubik’s cubes, building them by hand with plastic sheeting and a mix of sculpting clay and epoxy called Apoxie. Then a friend told them about the Nolop Fabrication, Analysis, Simulation and Testing (FAST) Facility on campus, with its 3D printers, other tools, and strong support system. “He brought me here, and I haven’t left yet,” Marcopoulos said.

Marcopoulos is not the only one. At the Nolop FAST Facility, a large collection of tools and ample support are stretching student imaginations and honing design skills as students solve problems and deepen their confidence as makers, all with the support of staff and other students.

That support is pivotal, because among the various makerspaces across Tufts, this space, which opened in January, is considered a “gateway” to the maker experience. It is distinct for being open to the entire Tufts community—engineers and non-engineers alike.

“Openness is what makes the facility so exciting,” said Brandon Stafford, a lecturer in the Department of Mechanical Engineering who oversees the facility. “We’re lowering the barriers to experimentation and innovation. It’s often the case that university resources are allocated to different research labs, and here, we’re making them available to everyone—no strings attached.”

That approach, he said, is drawing a strong response. Not long after it opened, word got out and “now it’s jammed,” he said. “There are regularly thirty to forty people here every afternoon.” 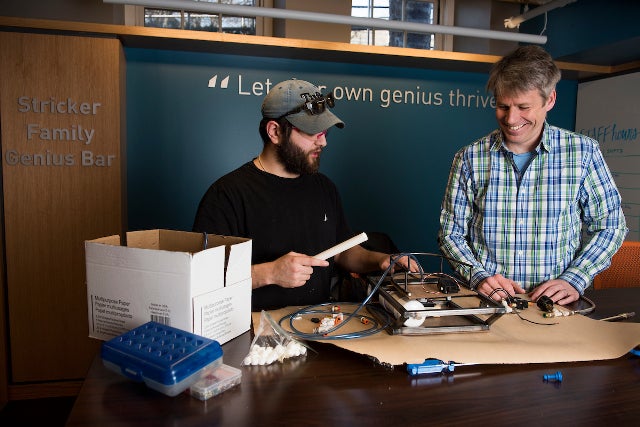 Mechanical engineering major Robert L. Reppucci, Jr., E20, works with Brandon Stafford, director of the Nolop FAST Facility. “Once every three hours I hear someone go ‘Yes!’” said Stafford. “To me, that means we’re giving people the confidence that they can do something truly extraordinary.” Photo: Alonso Nichols

Across the university, students need to build physical models, prototypes, and full-scale incarnations of their ideas, he said. “Sometimes the purpose is just a physics or engineering student testing or validating a theory,” he said. “Other times, the object being built is the goal, as in a researcher building a novel scientific instrument or an artist building an interactive sculpture.”

Stafford is especially impressed by students who hunker down here to work on projects for personal enrichment and for class assignments. Their industriousness is evident right up until closing time at 11 p.m., long after he’s gone home. “The students are taking responsibility for the space,” he said, “in a way that I’ve not seen at another university on this scale, where the university says, here’s your workshop, make whatever you want.”

Over the past semester, he noted, projects have been as simple as a rack to hold screwdrivers or as complex as an AI-controlled chess-playing machine.

The Nolop FAST Facility bridges the sciences and engineering, so it’s apt that it is housed in the Science and Engineering Complex, a combination of new and renovated space on the Medford/Somerville campus. As part of that project, Tufts carved out the makerspace in the basement of Robinson Hall, thanks to a $2 million gift from the estate of Keith Nolop, a scientist and researcher and uncle to two Tufts alumni. Other generous gifts have also made possible essential elements of the 5,000 square foot area—the Stricker Family Genius Bar, funded by Jane and Rob Stricker, E69, and the Byrne Advanced Machining Area, made possible by Dan Byrne, E76. 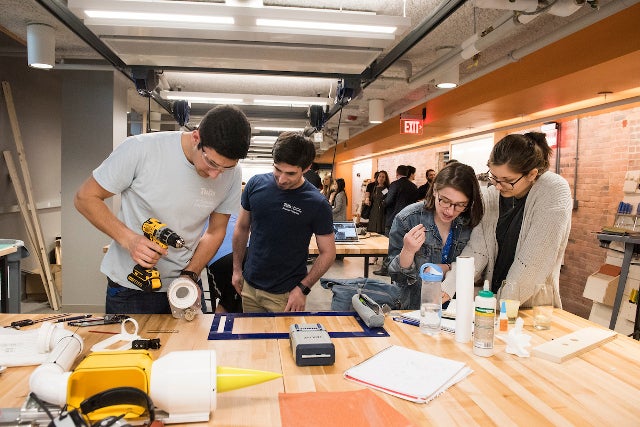 A group of students work at the Nolop FAST Facility. Photo: Alonso Nichols

The Genius Bar sets the tone for the facility. Students pull up a stool to a tall table staffed by fellow students to get help with conceptualizing projects as well as with how to safely use tools. Students can also work together at small round tables, brainstorm on whiteboards, and stash works-in-progress in one of dozens of cubbies. Open work areas offer access to basic hand tools and those used for electronics and soldering as well as a laser cutter and 3D printers.

The design of the facility meets a growing demand “for more dynamic spaces that allow creative, collaborative inventions being made,” said Ethan Danahy, E00, G02, G07, research assistant professor at the School of Engineering.

“As a faculty member trying to incorporate more hands-on, project-based learning and pushing my students to be inventive, I love that they have a space like the Nolop FAST Facility in which to work,” he said. “It augments the in-class time with the tools and equipment needed for prototyping their ideas, and perhaps most important, Brandon and his staff’s energy and expertise in creating a supportive environment to interested students of all abilities.”

Danahy’s students were among those breaking in the new space. As part of their final project, they created automated robots to navigate a small-scale warehouse maze to find and identify typical consumer products. The facility, he said, “has been a lifesaver in terms of manufacturing the test course and providing an environment for students to collaborate and to learn how to resolve the natural conflicts that arise when lecture-based theoreticals are applied to real-world physical engineering systems.”

Eric Wu, E21, who is studying mechanical engineering, said he was wowed by the place the minute he stepped into it, and he’s not alone. It’s become the go-to meeting place for the Tufts Robotics Club. “Whatever we need, it’s here,” he said.

His own project is a great example of the kind of challenging personal projects that students can undertake. To find out what it takes to design and build a robot from scratch—including fabricating the structures, selecting and assembling circuit boards, and programming—Wu decided to make a hexapod robot. About the size of an oversized spider, the project features six legs Wu first sketched on his iPad and then printed out on the 3D printer. (He’s chronicled his progress on his personal website.)

The roving robot required a good understanding of how to “program the legs in a way so that it will actually walk instead of just moving,” he said one day recently as he tinkered with the robot’s wiring. “Each leg has two separate small motors that act as joints—you want three legs touching the ground at the same time. It should walk in all directions, if you program it right.”

With easy access to multiple 3D printers and plenty of free printer filaments, the Nolop FAST Facility helped accelerate prototyping, Wu said. He also valued the encouragement he received there from friends—and even people he didn’t know—who were curious about his progress and sometimes shared their expertise. “I am constantly amazed by how the space has created such a welcoming community where students across all majors and disciplines make awesome things together,” he said. 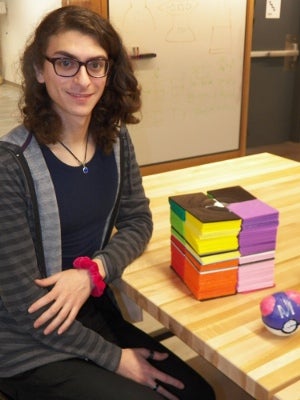 Elias Marcopoulos with elements of one of their creations. Photo: Laura Ferguson

Marcopoulos, who was building Rubik’s cubes, has indulged a lifelong love of puzzles by devoting countless hours to conceptualizing and working through design iterations at the facility to invent a puzzle they believe will set a world record: a sixty-four-layer rotational tower puzzle in eight different colors.

Marcopoulos points to the first iteration, and then the latest one. The difference between the two “is totally because of the people who you find here,” they said.  “Brandon is the biggest help. Whenever I have any idea I can just run it by him and he’ll say, No, that won’t work, or, That’s a good idea.”

The “cool” factor of the project, of course, is the chance to work with horses, but Toner also appreciates the experience she has gained working with standard hand tools like saws, screwdrivers, and calipers. The biggest challenge then comes with applying engineering principles to construct a device that works.

Because the device has to accurately measure lung resistance, the team has to figure out how to measure, among other factors, volumetric flow rate. A successful design integrates components like an anemometer (an instrument for measuring the speed of the air) and a pressure transducer (a sensor that converts pressure into an analog electrical signal).

There’s exacting calibration required if the device is going to work, but Toner said the facility’s atmosphere has made the team focused and confident. “It just feels like everyone who is there wants to be there,” she said. “When you run into a failure, it’s not upsetting because I know I can ask Brandon or anyone for help, and they will have a way that I can get around a roadblock.”

Stafford is optimistic that the Nolop FAST Facility will continue to gain momentum. He takes inspiration from words displayed prominently in the Stricker Family Genius Bar: “Let Your Own Genius Thrive.” As he see it, that encouragement sets the pace for unlimited creativity; in this makerspace, each person’s potential for invention can flourish and thrive.

“We are aspiring to a genius level, but not by saying one person is smarter than the other,” Stafford said. “We are all geniuses here. Once every three hours I hear someone go ‘Yes!’ To me, that means we’re giving people the confidence that they can do something truly extraordinary.”

Is Homework Useful for Kids? If So, What Age Should It Start?