Inspiring Path to Becoming a Veterinarian

Getting to and through veterinary school wasn’t easy or simple for class speaker Cindy Cesar, but her mission was always clear 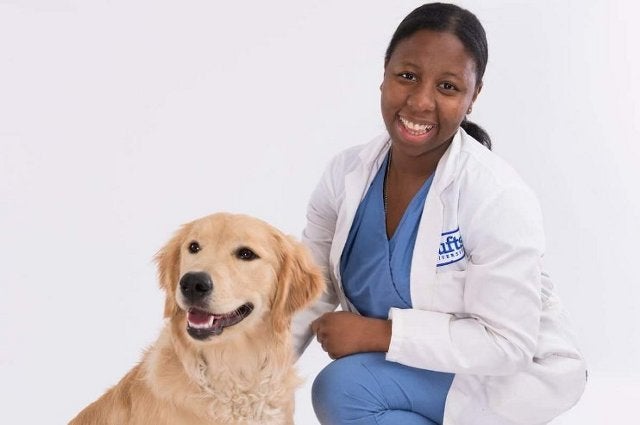 Cindy Cesar, V19, has wanted to be a veterinarian for as long as she can remember. Growing up in Providence, Rhode Island, she always brought home stray animals, resulting in a menagerie of pets. “I wanted to be around animals all the time and to find ways to help them, because they couldn’t speak for themselves,” Cesar said.

While Cesar’s mission was clear, the path to becoming a veterinarian was anything but. “My family didn’t have much money, and it had to be allocated among eight children, so we all could grow and thrive,” said Cesar. Mentors were as scarce as financial resources. “My parents were immigrants to the U.S. from Haiti, and they had no idea what I was supposed to be doing for school or who I should see for help,” she said.

Fortunately, Cesar jumped on a pivotal opportunity in third grade, when representatives from College Crusade of Rhode Island, a college-readiness and scholarship program for students in low-income urban school districts, visited her class. “Even though I didn’t really know what was going on, I thought, ‘Pay for college? I want to do that.’ I went home with the permission slip and said, ‘Mom, sign this paper.’ I’m pretty impressed with third-grade me for deciding to do something like that for myself,” Cesar recalled with a laugh.

Over the next ten years, Cesar and her twin sister, Richelene, participated in the College Crusade’s after-school programs and benefited from guidance they wouldn’t have received otherwise. That meant everything from finding science, math, and other extracurricular programs to studying for the SATs to successfully transitioning from elementary to middle school (and, later, high school). “My Crusade adviser Dwayne Clement was the most amazing person on the face of the planet,” Cesar said. “He was by my side the whole time to let me know that I could do this.”

Upon graduating from high school, Cesar received a Crusade scholarship to attend Rhode Island College, where she earned a B.S. in biology and minored in chemistry. To strengthen her veterinary school application, she did an animal-care internship at Roger Williams Zoo in Providence and worked as a veterinary assistant at Banfield Pet Hospital in Johnston, Rhode Island. The experiences “solidified for me that I wanted to be in the doctor’s seat, helping owners learn how to best care for their animals,” she said. 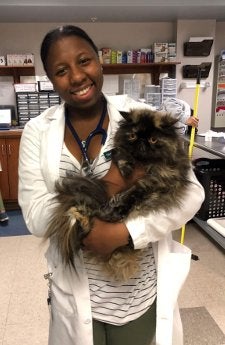 Cindy Cesar and her sister talk to children with backgrounds similar to theirs to help them realize their dreams. “We talk to them about our journey and the resources available to them,” she said, “and we show and tell them, ‘We were you. You can be us.’”

In 2015, Cesar applied to Cummings School of Veterinary Medicine, and “with grand glee” learned she had been invited to interview. “I was so excited. I thought if I show them who I am off of paper, maybe they’ll say yes.” She traveled to Grafton with her twin, who she had written about in her application essay.

“As soon as I set foot on campus and people found out who I was, they said, ‘That must be Richelene!’ I was like, ‘Wow, you all read my essay and remember it?’” Cesar said. “That made me so at home and relaxed. I knew veterinary school would be the hardest thing I’d ever do, so I wanted a place where I could thrive mentally, socially, and physically. If your environment fosters a good mentality overall, you won’t drown even when you struggle with the academic parts.”

Still, Cesar initially experienced culture shock from the intensity of veterinary school. “I felt like I was always a step behind everyone else. That first year was one of the most difficult of my life—just learning to study correctly so I could understand things as quickly as the people around me,” she said. “I worked three jobs while an undergrad, so I knew I could manage my time. But the content was completely above anything I had experienced in my whole life.”

She didn’t just sit back and hope for support. “Soon, I felt like I could go up to any doctor, professor, staff member, or student on campus to ask for help,” Cesar said. “I just had to turn around and look, and there was always someone in my corner.” Along the way, Cesar sought to help make the transition to veterinary school easier for other students who might feel as overwhelmed or out of place as she had at first.

Cesar leaned into the campus community and leadership roles. She served as the Class of 2019 president from her second year onward and for two years as a student co-chair of Tufts Veterinary Council on Diversity. She also started working as a student technician in the emergency room of the Henry and Lois Foster Hospital for Small Animals and became president of the Student Veterinary Emergency and Critical Care Society. She was chosen by her peers to be their class speaker at Cummings School’s thirty-seventh commencement on May 19, and was inducted into the Tisch College of Civic Life’s Honos Civicus Society in recognition of her important contributions during her time at Tufts.

As she looked ahead to receiving her doctorate of veterinary medicine at graduation, Cesar said she was excited to be moving on to a yearlong internship in small-animal medicine at Tufts Veterinary Emergency Treatment & Specialties in Walpole, Massachusetts. In working with pets and their owners, Cesar said she’s motivated by memories of a childhood pet with a somewhat unhappy ending—a female bulldog the family gave away because of housetraining issues.

“In Haiti, people didn’t have animals as indoor pets, so the dog kept going to the bathroom inside and my parents had no idea why. We tried our best, but we just didn’t know we were supposed to walk her,” Cesar said. “Now I want to help people from all different backgrounds understand that there’s a right way to take care of an animal—but that there’s also nothing to be ashamed of. We can get you to the place of knowledge that helps your animal thrive and you feel comfortable being responsible for it.”

Outside the clinic, Cesar is driven to help kids with backgrounds similar to hers realize their dreams. Cesar and her twin—who’s pursuing a doctorate in clinical psychology—frequently attend career days, conduct mock job interviews, and otherwise mentor inner-city kids as Crusade alumni. “We talk to them about our journey and the resources available to them, and we show and tell them, ‘We were you. You can be us.’”

A Future Veterinarian with a Vision

Improving the Lives of Production Chickens

A Day in the Life of a Whale Researcher