The new graduate was determined to fill his four years at Tufts with fine art, philosophy, computer science, and more. And he found his creative voice along the way 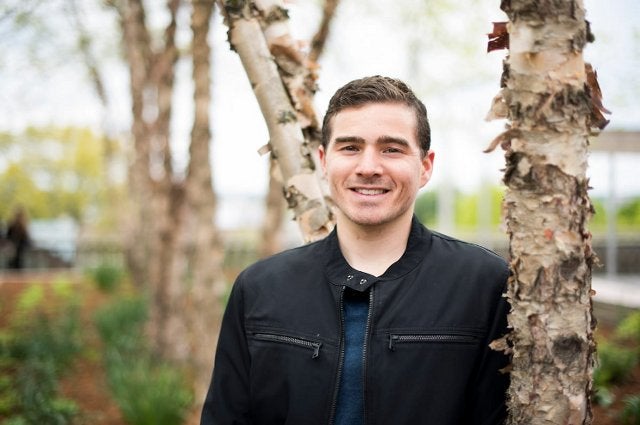 When he first arrived at Tufts from Boca Raton, Florida, Eric Osherow, A19, took course after course in philosophy and oil painting. “I think it was five oil painting courses,” he said. “Four with the same instructor.” And he did it all in his first two years, as he accrued credits in philosophy and fine arts. Once he completed requirements for his philosophy major, he began taking courses in computer science, and cultivated an interest in engineering.

For Osherow, pursuing multiple passions has been a creative act. Diagnosed with cancer in middle school, he endured years of debilitating treatments, but is now cured. What remains is a sense of urgency; he wants to make the most of everything, so whenever something new comes along that feels right, he follows his insatiable drive to always learn more. He’ll graduate this spring with a double major in philosophy and international literary and visual studies, a minor in fine arts, and no regrets.

“With fine arts, I found more creative freedom in the minor,” he noted, explaining that it gave him “the chance to explore a lot of different areas.” Computer science proved fascinating, but rather than majoring in it, “it was a more creative decision not to,” he said.

Osherow’s focus now is engineering, and he plans to study for a master of science in innovation and management at Tufts in the fall. He sees the opportunity to make a mark and, again, to make up for lost time. “I discovered engineering a bit later than others,” he said, but now sees a huge potential opening up. “Look at the iPhone,” he said. “It’s had such an effect on people—more people and more intensely than looking at the Mona Lisa or any painting.”

Yet his older interests haven’t disappeared. Take fine arts. Although he doesn’t paint anymore, he continues to see art in everything, even when exercising at the gym, which he does regularly.

“It’s meditative, the structure of working out,” he said. Art, to his way of thinking “isn’t what you do, but how you do it,” and the practice is invaluable no matter where it leads. Scrolling through his website, which includes photographs of some of his oil paintings from a few years ago, he mused that painting “did its job—it helped me find my creative voice.”