The artist and writer will work on a collaborative project to create performances, sound pieces, and sculptures 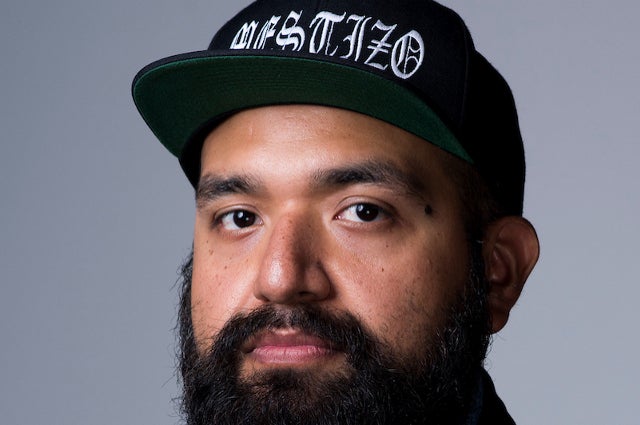 Anthony Romero, professor of the practice in the Department of Visual Arts at the School of the Museum of Fine Arts at Tufts, has won a prestigious fellowship at the Radcliffe Institute for Advanced Study at Harvard University.

An artist, writer, and organizer who documents and supports artists and communities of color, Romero is among fifty leading thinkers and writers who make up the 2019-2020 Radcliffe Institute class. (Tufts alumna Jill Lepore, J87, H14, a Harvard historian and New Yorker staff writer received a fellowship as well for her project “If/Then: How Simulmatics Corporation Invented the Future.”)

Romero, awarded the David and Roberta Logie Fellowship, is highly regarded for his collaborative, multimedia works that bring together intercultural and historical narratives. As a Radcliffe Fellow, he will undertake a project called “no noise disturbed the quiet of the morning.”

“I am very much looking forward to having the time and space to concentrate on a thread of research that I began last year with a project that I developed through a generous grant from the Boston Foundation and in collaboration with artists Josh Rios and Matthew Joynt,” said Romero. “Matt, Josh, and I will continue to work closely together over the course of the next year to develop a series of performances, recordings, and sculptures as part of this research.”

The latest iteration of that work will be seen—and heard—this month in St. Louis when Romero, Rios, and Joynt create a “mobile monument” that underscores the “resistance to legacies of over-policing in communities of color, specifically through noise ordinances,” he said. As part of the public art exhibition Counterpublic, the monument “will fill the streets temporarily with an unruly sound installation roaming through the neighborhood as a siren sound evading capture,” he said.

The Radcliffe Institute project will focus on “how indigenous populations, under European colonial rule in the United States, Australia, and South Asia, were controlled through the criminalization and legislating of native sound and music practices,” he said.

Through a collection of performances, sound pieces, and sculptures, the project will elucidate how sound “becomes an extension of indigenous bodies and bodies of color,” he said, and how, by extension, sound contributes to oppressive constructs about race and racism.

As an example, Romero referenced the 2012 shooting death of seventeen-year-old Jordan Davis outside a convenience store in Jacksonville, Florida, after a white customer objected to the volume of Davis’ music. The killer, Michael Dunn, was witnessed as having said “I hate that thug music” before approaching Davis’ vehicle. Dunn was later found guilty of first-degree murder.

“As Jennifer Lynn Stoever and other sound studies scholars have noted, for people of color, what is heard is just as likely to reap the wrath of white supremacy as what is unheard,” said Romero. “Jordan Davis’ death allows us to see the ways that black sonic space extends the black body and, for that reason, cannot be tolerated by his killer.”

His publications include The Social Practice That Is Race (Wooden Leg Press), co-authored with Dan S. Wang, and the exhibition catalogue Organize Your Own: The Politics and Poetics of Self-Determination Movements, which he edited.