Backyard Chickens and the Risk of Lead Exposure 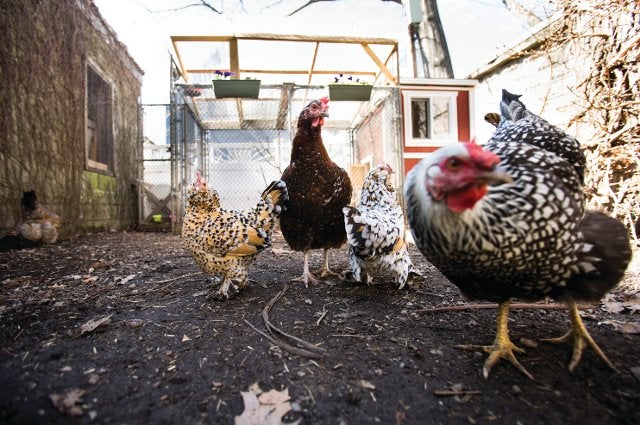 When Teresa McGowan and her husband first bought their Somerville, Massachusetts, home in 2004, one of the first things they did was test the soil in their yard for lead. It was a recommendation from local gardeners, who knew that produce grown in contaminated soil can be dangerous.

Research has shown that lead is a potent neurotoxin, associated with reduced IQ, attention-related behavior problems, and poor academic achievement in children exposed to it through food or environmental factors.

Since lead contamination in the soil is all but ubiquitous in many parts of the northeastern United States—a result of previous generations’ use of leaded gasoline, lead-based paint, and other now-banned materials—it wasn’t a surprise when the results of McGowan’s test came back positive.

But even though the news was unwelcome, it wasn’t terribly troubling. “I didn’t worry about the lead because we weren’t planning on having children,” McGowan said, “and it’s too dark back there for a veggie garden.”

About a decade later, however, McGowan did have reason to worry. She had begun keeping four chickens in her backyard and, in October 2015, one of them, Opal, suddenly started staggering and having bouts of diarrhea.

McGowan took the gray hen to a local veterinarian, who advised testing the four chickens for lead. Blood from all of them tested positive—Opal’s blood lead level was so high the machine couldn’t register it. “When we got the chickens, I just didn’t think they would be taking up as much lead as they apparently did,” McGowan said.

Do you own backyard chickens? Read expert advice on how to avoid lead.>>

She is hardly the only backyard chicken owner who didn’t know lead could pose a danger to her pets. Over time, garden clubs and other groups have done a good job of publicizing the dangers of lead for backyard vegetable gardeners, leading to widespread awareness about the importance of soil testing and mitigation efforts such as building raised planting beds filled with fresh soil. 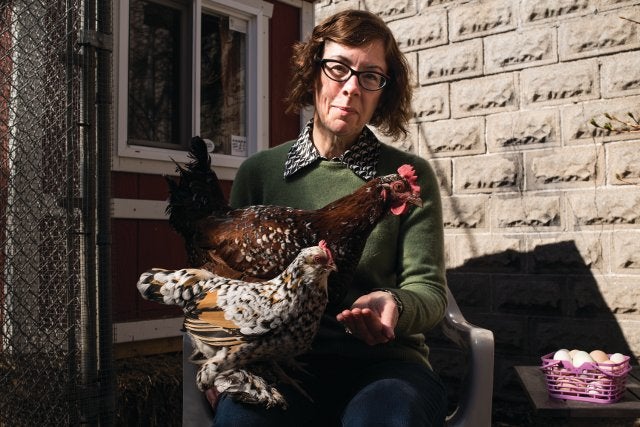 Teresa McGowan and two of her hens. Photo: Alonso Nichols
There’s even a longer history of public health agencies sounding the alarm about lead-based paint, which spurred a federal ban of it in new construction in 1978. But relatively little research—and even less public awareness campaigning—has been done on how lead contamination might affect backyard chickens and the humans who raise them.

They found that almost everyone let their chickens roam free in their yards, despite many being aware they likely had lead contamination on their properties. When they took blood samples, they found that most of the chickens had elevated lead levels. And that caused the research team to wonder, if lead was in backyard chickens, could it also be in the eggs their owners were eating? A second study found that it was.

The discoveries, while sobering, shouldn’t scare people away from keeping chickens and eating their homegrown eggs. But they do mean that those with backyard flocks must take precautions. “People like me think that having an organic vegetable garden and chickens in your backyard provides safer food than what you get at the supermarket,” said Gregory Wolfus, V98, a clinical assistant professor at Cummings School who raises hens at home. “The reality appears to be that it’s debatable.” 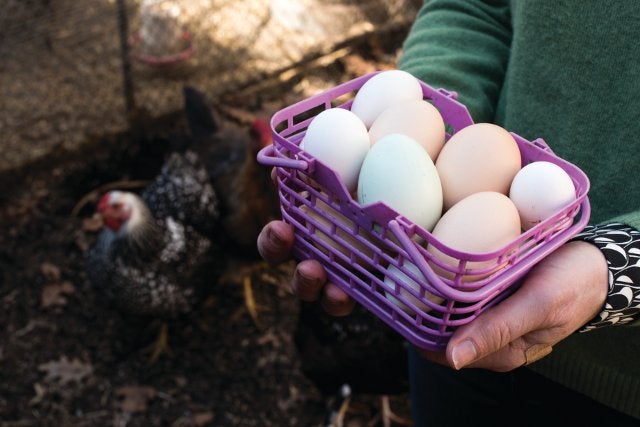 The bounty of backyard chickens. Photo: Alonso Nichols
The practice of keeping backyard chickens in urban areas has re-emerged in recent years as part of the burgeoning hyperlocal food movement. The birds themselves are easy to love for being low-maintenance pets, and for providing all-natural pest control, free fertilizer, and fresh eggs. Add all this together, and it’s no wonder that backyard chicken-keeping has been on the rise in cities such as Boston, Los Angeles, Miami, and New York.

One of the early converts to the backyard chicken movement was Wolfus, who keeps about a dozen hens at his home in Shrewsbury, Massachusetts. When Mordarski was a Cummings School student simultaneously pursuing a D.V.M. and a master’s degree in public health, it was Wolfus who suggested he look into studying lead in chickens.

In the summer and fall of 2015, Mordarski tested fifty-seven birds from thirty flocks at homes around Greater Boston (including McGowan’s) for signs of lead. “It was pretty shocking to me how many birds actually tested positive—more than two-thirds of them,” said Mordarski, who published the results with Wolfus, Rosenbaum, and his other collaborators from Cummings School and BU in the September 2018 issue of the Journal of Avian Medicine and Surgery.

None of the birds showed any signs of lead poisoning, despite some hens—like McGowan’s Opal—having extremely high levels in their blood. “You’d think those chickens would’ve been sickly or dead,” Mordarski said.

“That’s the thing with chickens, though,” said McGowan, whose hens seemed healthy when they first tested positive. “They can go along hiding whatever is wrong until they’re at death’s door.”

On average, the lead-positive chickens had blood levels of around twelve micrograms of lead per deciliter of blood. By way of comparison, any child with a blood lead level above five micrograms will be reported to the state for intervention, which usually includes a home inspection to uncover the source of exposure and possibly medical treatment to remove lead from the blood.

A follow-up study found that urban dwellers need to look out for lead for more than just their chickens’ sake. From 2016 to 2017, Rosenbaum and Jessica Leibler, an assistant professor of environmental health at BU, led a team of students in testing 201 eggs from forty-eight flocks in Greater Boston.

The researchers thought that the birds could also serve as a sentinel for detecting sources of lead exposure in the environments they share with their human families. So they interviewed the owners about their poultry husbandry and biosecurity practices, egg consumption, and household demographics, as well as took samples of the coop and yard soil and the chickens’ drinking water, feed, and feces.

The results of their study, published in Environmental Research in November 2018, found that 94 percent of backyard chicken owners regularly ate eggs. And nearly all the eggs sampled—98 percent of them—contained detectable concentrations of lead. The lead appeared to primarily come from dirt in the chickens’ coops, which is a finding consistent with the few other studies of urban chickens in New York, Belgium, and Australia.

“About 10 percent of the flocks that we sampled had eggs with lead levels above the cutoff value for what’s acceptable for candy that children can safely consume,” Rosenbaum said. The researchers used the candy cutoff, she added, because U.S. regulators have not established a safe limit for eggs, probably because lead has not historically been a problem in commercial egg farming. “But the backyard eggs we tested across the board had ten to 100 times higher the level of lead found in commercial eggs.”

Furthermore, the highest lead concentrations detected in the study were nearly double those reported in similar U.S. studies. Of particular note, the researchers wrote, “our maximum egg lead concentration was more than six times the maximum level obtained in a [2014] study in New York City of eggs harvested from community gardens.” They suspect this is because backyard coops tend to be closer to older housing, while community gardens are often located farther from buildings.

The researchers then used models to assess whether those elevated lead concentrations were high enough to pose a risk to human health. These predicted that backyard egg consumption would increase overall blood lead levels by 0.1 to 1.5 micrograms of lead per deciliter of blood in children younger than seven. Under the maximum consumption scenario, they found that eating affected eggs may increase blood lead levels by as much as 50 percent for infants under one year of age. (There is no safe blood lead level for children, according to the U.S. Centers for Disease Control and Prevention.) “Our findings indicate that chicken eggs may be a source of lead exposure in children whose families raise backyard chickens and consume their eggs,” the researchers concluded.

Somerville resident Pearl Emmons already had decided not to feed her chickens’ eggs to her toddler son or to eat them while she was nursing because of the possibility of lead contamination. And after the Cummings School study found her chickens’ eggs to have high lead levels, “my husband and the neighbors we share the chickens with stopped eating them,” Emmons said. 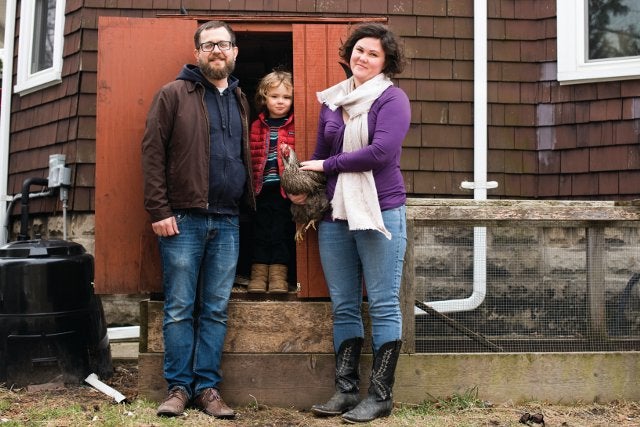 Emmons said that when her one remaining free-range hen passes away, she and her neighbors will start a new flock, but keep those chickens confined to a run with safe new soil.

When Teresa McGowan brought the seriously ill Opal to the veterinarian in 2015, she was told she needed a soil-remediation plan. “It doesn’t make sense to treat the birds if you don’t fix the soil first,” she said. But the remediation process is neither easy nor inexpensive. McGowan and her husband ultimately ended up trucking in about twelve cubic yards of clean soil and keeping the chickens in that fenced-in part of the yard.

The veterinarian meanwhile prescribed chelation therapy for McGowan’s four chickens. Every day for three months, McGowan and her husband gave each bird an injection of a medication that would bind with the lead in its blood, as well as two daily infusions of fluids under the skin to help their bodies flush out the toxin. (The hens ended up requiring multiple courses of treatment to bring down their lead levels.)

Some people might hesitate to invest so heavily in veterinary care for food animals that cost little to acquire, but McGowan had become attached to her chickens. She initially worried that sharing her experience with lead contamination might aid arguments against keeping urban chickens, but, “in the end I decided, well, it really is better for hens not to be living in leaded soil,” McGowan said. “And maybe this way, other people now will know to take precautions.”

With backyard chicken ownership so popular, the Cummings School and BU researchers said this pathway of potential lead exposure warrants attention and further study. However, they also were quick to stress that—given the many benefits of raising your own food—people shouldn’t rush to abandon keeping hens. Urban chicken owners just need to consider and address environmental lead contamination the same way they should for an urban vegetable garden.

“Chickens bring people a lot of happiness, and chicken ownership offers a lot of educational opportunities for kids, especially in urban areas where they might not otherwise have access to livestock,” said BU’s Leibler, the co-lead author of the egg study in Environmental Research. “It’s certainly not a practice that we want to discourage. We just want to help make it safer.”