A Conversation with the School of Dental Medicine’s New Dean

Nadeem Karimbux, a leader in dental education, talks innovation and the importance of mentoring 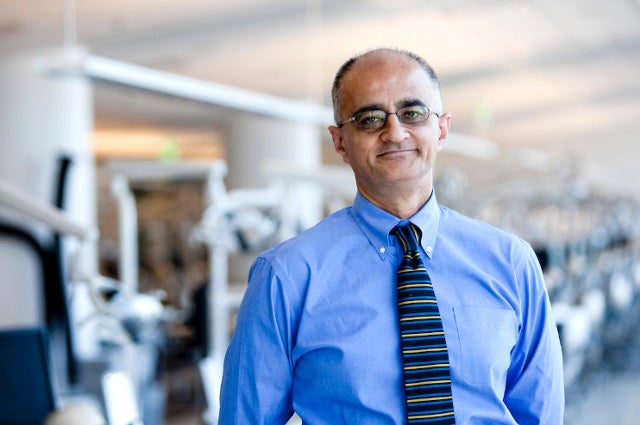 Nadeem Karimbux, who will become the seventeenth dean of Tufts University School of Dental Medicine on July 1 is a familiar figure in the classrooms and clinics at One Kneeland Street. Since arriving in 2012 as associate dean for academic affairs and professor of periodontology, he has been involved in every aspect of teaching and learning at the dental school—not just as an administrator overseeing the education of 900-plus predoctoral and postdoctoral students, but as a hands-on teacher and mentor himself.

He led the school through its 2015 reaccreditation and oversaw a sweeping curriculum revision for the DMD program, which better combined classroom work and practice in the clinics. During Karimbux’s tenure in academic affairs, the school has also increased its attention to interprofessional education and incorporated new technologies into training. Karimbux has edited several professional journals—he is the editor of the Journal of Dental Education—and received the Provost’s Teaching and Service Award from the School of Dental Medicine in 2015.

Karimbux came to Tufts from Harvard’s School of Dental Medicine, where he was an assistant professor and assistant dean. He earned his dental degree, a master’s in oral biology, and a certificate in periodontology from Harvard. He also has a bachelor’s degree in zoology from the University of Massachusetts at Amherst, where he arrived at age eighteen from his native Kenya, unfamiliar at the time with much about life in the U.S., but already convinced that he wanted to be a dentist.

He recently spoke with Tufts Now about his journey to the School of Dental Medicine, and his hopes for the future of school.

Tufts Now: Why is this an important time to lead the School of Dental Medicine?

Nadeem Karimbux: The school’s strategic plan, called Vision 2020, has almost been executed. With some of the challenges with the changing health-care system, the way this generation of students learns, the kinds of technologies that are being integrated into dentistry, those challenges need to be put together in a new strategic plan. The School of Dental Medicine has enjoyed a 150-year history. It is exciting to launch TUSDM into the next 150 years with this new strategic plan.

Can you tell us a little bit about your personal journey?

I grew up in Kenya, East Africa as a third-generation Kenyan of Indian descent. I had an interest in science and I think very naively had decided about dentistry. I say ‘naively,’ because if you look at the current generation of dental students, they really researched dentistry as a career. It was with that very little knowledge about dentistry as a career that I came to United States.

Having come from Kenya to the United States, I appreciate and recognize how much this country has to offer. I think that’s a perspective that my children growing up in the United States don’t have, but it reminds me that despite all that’s going on in this country, people who come here recognize all the potential that they can have.

What have you seen as the biggest changes in dentistry over your career?

The changes in techniques that we have available to us. When I think about dental implants, for example, we were just starting to do them when I graduated. Now they have become very common as a successful therapy for our patients. The other areas that I’ve seen shifts in are our knowledge base. We now understand the links between periodontal disease and systemic disease, for example. The use of growth factors, the use of bone grafts, the use of dental membranes to regenerate hard and soft tissue are some of the things that were not available when I graduated, but have now become common practice.

What is one characteristic that you think every leader should possess?

The ability to listen, to seek input, but also to guide and mentor in a way that gives the community or representatives the ability to solve problems by themselves. And a willingness to also step in to help people move along; to solve issues that they can't.

Have you benefited from mentors during your career?

Mentorship has been something that has been critical to my development. While I was at Harvard, I was lucky enough to work with a mentor, the dean of dental education, who gave me a lot of responsibility as a junior faculty member. I learned from my mistakes, but was also exposed to things that allowed me to develop.

I believe mentoring for students and faculty is a critical part of what we do. Ever since I’ve been at Tufts, I’ve had a cohort of four students per year that I mentor. Setting aside time to be with those students, to have dinner with them, and to listen to their stories is critical for me to understand. When they come to me to work on a research project or get some advice about career, I see the impact that you can have as a mentor.

I also work with faculty one on one, whether it’s on a new course or working on research projects. It’s allowed me to appreciate the growth that you can give to junior faculty when you spend that kind of time with them.

What are your hopes for the experience that students will have at the school?

What do you like to do when you’re not on campus?

When I was a young faculty member, a student who was assisting me in my dental practice challenged me to run a half marathon. When I committed to that, I recognized the need to set aside time for one’s own benefit.

I like to practice yoga, meditate; I still play squash on the weekends, and I’ve recently bought a spin bike. I cook on the weekends. Certainly, travel has been a big part of what I’ve experienced. When I go out to dinner with my student mentees, the message that I give them is about trying to find time in busy schedules to be able to enjoy those things.

Studying the Link Between Gum Disease and Alzheimer’s Disease

Dental Emergencies Years in the Making