A New Home for Squash at Tufts

The eight-court, donor-funded facility will give a growing sport a space of its own 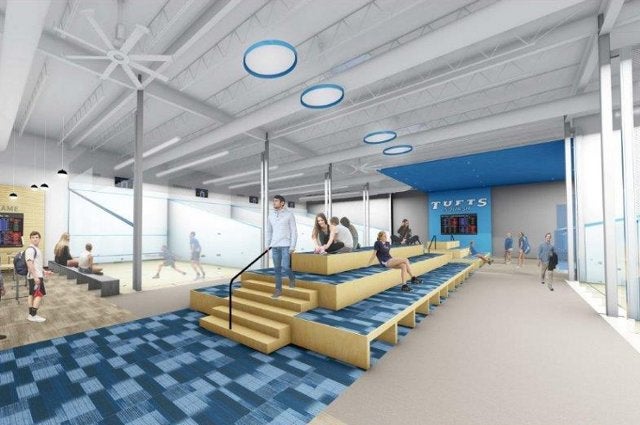 Cynthia Borger, J87, A19P, played squash during all four of her years at Tufts, and she treasures her memories of the fast-paced racquet sport—especially the times when her parents and fellow Jumbos were there to cheer her on.

So when she heard Tufts Athletics was raising funds for a new expanded squash facility, she was quick to jump on board. “I’m thrilled to support a program that will serve the university for years to come,” said Borger, a member of the Athletics Board of Advisors. “It’s a win-win for athletics and for the entire community.”

Borger is one of an impassioned group of alumni, parents, and friends who have come together to make possible a new era for Tufts squash. Some two decades ago, changes in court-size regulations forced the Tufts men’s and women’s teams to stop playing at Cousens Gymnasium, and instead rent practice space at Harvard and a private high school.

But this summer, construction will start on an eight-court facility—including two glass show courts, designed for spectators—that positions the university to host NESCAC and regional intercollegiate, as well as high school and club tournaments. The $6 million facility, which is expected to be finished next spring, is entirely funded by donors.

“We are deeply grateful to everyone who so generously stepped up to give our squash program this beautiful new on-campus home,” said John Morris, director of athletics, noting that the facility will also enhance recruiting. “It will be a true game changer in terms of attracting the best and brightest squash student-athletes and hosting high-level competition at Tufts. From a broader perspective, this facility is also just another example of how philanthropy is helping us meet critical priorities for Tufts Athletics and give everyone in the Tufts community first-class options to pursue fitness, health, and wellness.”

Trustee emeritus Nathan Gantcher, A62, H04, has donated a show court. The Gantchers, who also made possible the adjacent Gantcher Family Sports and Convocation Center that opened in 1999, didn’t hesitate to respond to a project that continues the transformation of athletics at Tufts.

“We give where it is needed,” he said. “This is a project that’s long overdue, and we’re delighted to help move it along.” Gantcher’s son, Michael, also lent his support to show his enthusiasm for a sport that offers not only an excellent cardiovascular workout, but also exercises the brain—squash has been called “athletic chess” for its emphasis on strategy.

As for the reputation of squash as an “elitist” sport, Michael Gantcher said that stereotype no longer applies. As a parent in New York City, he has been involved with the urban program City Squash and witnessed how children from the city’s neighborhoods thrive on the sport’s physical and mental challenges.

“I think squash is at the tipping point of going from a niche sport to one that is more inclusive and more open,” he said. Tufts expects to capitalize on that momentum by developing squash programs with host communities of Somerville and Medford.

Vivek Shah, A94, didn’t play at Tufts, but got hooked on the sport later on. He and his wife, Katherine, are also among those who are excited about the potential of the facility to introduce squash to a new generation of players. “Squash is possibly the best sport that many have never played,” Shah said. “I hope the facility attracts new players while also supporting those who have long been committed to the game.”

The new facility will arrive at an opportune time. Joe Raho, head coach of the men’s and women’s teams, joined Tufts in 2017 from Brown University, where its teams are ranked among the top twenty in the College Squash Association. He is a two-time U.S. Junior Squash champion himself, and former captain of the squash team at the University of Pennsylvania.

His goal is to launch the two teams to even higher rankings. “The new facility brings us a lot closer to that goal,” Raho said. “Tufts is an amazing place, and we’ll soon have a space for squash that matches that reputation; everything will be in place for us to achieve those goals. It can happen for us.”

Behind the Rise of Tufts Athletics