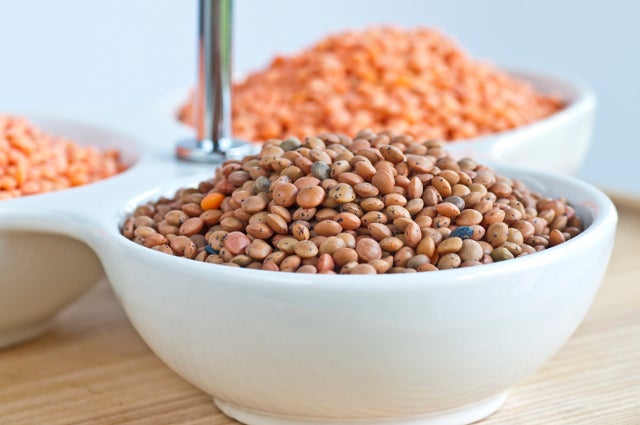 We often hear that consuming protein may benefit people hoping to lose weight or build muscle mass. Now Tufts researchers have found that protein intake may also be associated with slower progression of age-related inflammation.

Building on their previous studies on the role of protein in preserving health and function, epidemiologists Adela Hruby and Paul F. Jacques, researchers at the Jean Mayer USDA Human Nutrition Research Center on Aging at Tufts, found that adults around sixty years old, whose diets on average included adequate protein—and in particular protein from plants—showed fewer signs of “inflammaging.” Inflammaging is a low-grade, age-related chronic inflammation associated with frailty and illnesses such as hypertension, diabetes, heart disease, and cancer.

The data for their study, which was recently published in the journal Current Developments in Nutrition, came from 2,106 participants of the Framingham Heart Study’s Offspring Cohort, adults participating in a long-term study of cardiovascular disease.

The researchers compared the participants’ composite inflammation scores against their protein intake, using the results of food questionnaires filled out as part of their Framingham study exams.

Tufts Now recently talked to Jacques and Hruby about their study, and what it might mean for the health of older adults.

Tufts Now: Why did you decide to study the effects of dietary protein on inflammation in the aging process?

Adela Hruby: To our knowledge, no study thus far has examined the impact of regular protein intake over a long period of time and the effect it may have on measurable markers of age-related inflammation and oxidative stress. Our goal was to assess how habitual protein intake in a sample of generally healthy, aging adults might affect the changes we see in chronic inflammation.

Paul Jacques: Inflammation plays an important role in diseases related to aging. Our previous research had seen a striking maintenance of physical function and lower risk of disability with age among older individuals who consumed higher amounts of protein since mid-life. The science would suggest that people with inadequate levels of protein might benefit from more.

Quantifying the aging process seems like a difficult thing to do. How were you able to measure “inflammaging” in the human body?

Hruby: Biomarkers are evidence in the body of existing disease or health. We were fortunate to have a large group of people who were followed over a long period of time as part of an existing study. The participants underwent regular medical exams, which included bloodwork and urine samples to measure various biomarkers. We created our composite score by combining nine commonly used biomarkers of inflammation and oxidative stress. The higher the score, the greater the level of inflammation. These biomarkers were measured twice, with measurements coming seven years apart, and we looked at changes in the scores over this time period.

Paul Jacques: While our results do not reflect all possible biomarkers of chronic inflammation, these biomarkers are broadly associated with chronic diseases and their risk factors.

Protein comes from so many sources. Did the results differ depending on the type of protein consumed?

Jacques: In previous research, food sources have been shown to have differing effects on these biomarkers, and that was the case in our study. While total protein intake was associated with lower inflammation scores, the most favorable results were for participants who consumed higher levels of plant protein.

Although we did not see improved scores associated with higher consumption of animal protein alone, it’s important to note that participants consumed both animal and plant protein. The difference is likely a consequence of other components of the foods that may be pro-inflammatory or anti-inflammatory. A question for further study is whether it is protein per se that helps counteract age-related inflammation, or is it other components of the foods?

What do the results of your study mean for older adults who would like to stay healthy longer?

Jacques: Meeting protein needs in aging populations is important not just for maintenance of lean muscle mass, strength, and physical function, but our work also indicates protein may have a role in counteracting age-related changes in the inflammatory response.

Hruby: The recommended daily amount of protein for adults is calculated based on several factors, including age, weight, and gender. As a broad example, an average 165-pound adult would need 60 grams of protein per day—about the equivalent found in three cans of tuna or four containers of Greek yogurt. For plant protein sources, a cup of cooked quinoa contains about 8 grams of protein, and a quarter cup of almonds has 6 grams.

While most study participants were consuming adequate amounts of protein, those who took in a bit more were doing better in terms of their inflammation status. Our research suggests that including enough protein in the diets of older adults, especially from plant sources, may help reduce the burden of frailty, sickness, and disease that is associated with the chronic inflammation of aging.

Audrey Laganas Jenkins can be reached at audrey.jenkins@tufts.edu.