If a Cummings School scientist can unlock why tuberculosis affects individuals so differently, she can point the way to more personalized treatments 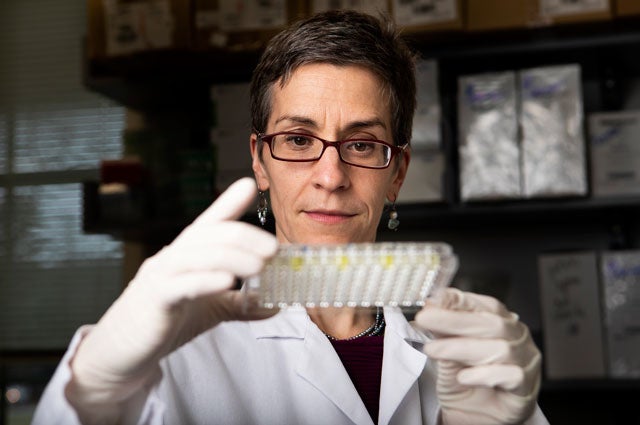 Tuberculosis is the Jekyll and Hyde of infectious disease. It infects a quarter of the world’s people, according to the World Health Organization, but at least 90 percent of them never develop clinical symptoms. However, for those who suffer the persistent cough, fevers, and severe weight loss of classic “consumption,” TB can be a fierce killer, claiming more lives worldwide than any other infectious disease.

There is currently no accurate way to predict who will be vulnerable or resistant to Mycobacterium tuberculosis, the airborne bacterium that causes TB, and vaccination is reliably effective only in children under 5. Current diagnostic tools, such as sputum tests and lung X-rays, may fail to detect the early onset of active disease. Adults who show signs of active disease must undergo a complicated and costly regimen of antibiotics for months—sometimes years—and antibiotic resistance is growing.

“M. tuberculosis infection produces a wide spectrum of outcomes in humans,” said Gillian Beamer, an assistant professor in Cummings School’s Department of Infectious Disease and Global Health. “Some people clear the bacteria completely. Others develop latent infection, which means they control the bacteria indefinitely, perhaps for their whole lives, and keep it from multiplying, so they can’t infect others. A small fraction of people develop active TB disease itself that may progress rapidly or slowly.”

Beamer and her team, conducting work that recently earned her a second major grant from the National Institutes of Health, are investigating genetic and biological markers that may make it possible to accurately predict patient outcomes based on “signatures” associated with the infection.

To do this, Beamer plans to identify and test both proteins in blood and lung tissue that accurately determine disease categories and DNA sequences on chromosomes that accurately correlate with these disease outcomes. “Our goal is to generate testable models that can predict the outcome of infection before disease occurs,” Beamer said. The signatures proven most accurate in mouse studies will be tested using samples from humans. (Mouse models speed the discovery process by making it practical to study a disease in many individuals over their entire lifetimes.)

Like most researchers in the field, Beamer first focused her efforts on two strains of inbred mice: one highly susceptible to M. tuberculosis and one highly resistant. A few years ago, however, she learned of a new model, called Diversity Outbred (DO) mice, whose genetic variety mirrored the human population’s. Believing this diversity would better reflect the highly variable human response to TB infection, Beamer pioneered the use of the DO model for TB research. 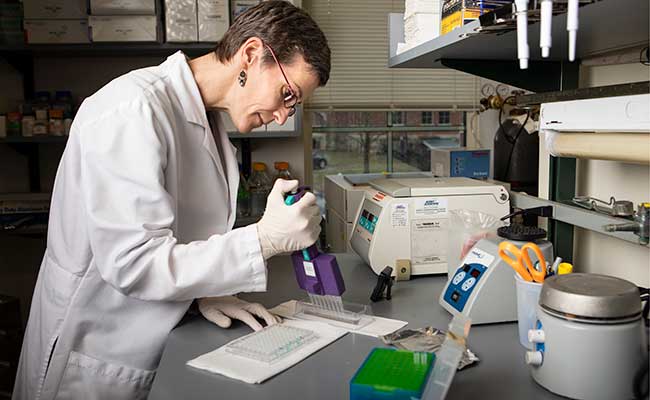 “If we can develop and test a model that determines an individual DO mouse’s risk of developing TB after M. tuberculosis infection, the same should be possible in humans. Then, physicians can better tailor treatments and focus resources,” said Gillian Beamer. Photo: Anna Miller
Beamer’s preliminary research has already identified five chromosomal locations that seem to be associated with susceptibility to TB in mice. Identifying a location doesn’t mean pinpointing a gene, however. “A location is more like a city block of information,” Beamer said. “We want to go from the city-block information level to specific street numbers and then use that information to make predictive models for individual people.”

Beamer is collaborating with researchers from Wake Forest University School of Medicine, Rensselaer Polytechnic Institute, and the College of the Atlantic to apply cutting-edge data mining, machine learning, and image-analysis algorithms to this ambitious gene-mapping effort.

Hypothetically, researchers might find a dozen genes that control how the host responds to M. tuberculosis by producing proteins that influence inflammatory, immune, and metabolic functions. These proteins likely interact and change over time, just as individual host responses to M. tuberculosis may change over their lifetimes. Beamer plans to use these response patterns as predictive data sources while also developing genome-based predictions. “Genome-based predictions could be more straightforward from a practical perspective, because our genomes don’t change and can be readily tested before infection occurs,” she said.

“If we can develop and test a model that determines an individual DO mouse’s risk of developing TB after M. tuberculosis infection, the same should be possible in humans. Then, physicians can better tailor treatments and focus resources,” Beamer said. In some cases, monitoring might be appropriate; in other cases, a regimen of antibiotics might offer the best outcome. “It’s personalized medicine for TB.”

Beamer has had TB in her sights since she was a young V.M.D. enrolled in Ohio State University’s dual anatomic pathology residency/Ph.D. program. The opening of the Tufts New England Regional Biosafety Laboratory on the Cummings School campus in 2009 gave the new Ph.D. an opportunity to pursue her research in a facility offering state-of-the-art resources to test challenging diseases such as TB while maintaining connections with clinical colleagues. (She still spends about 20 percent of her time as a pathologist and, while TB doesn’t usually affect cats or dogs, she relishes the opportunity to contribute to other veterinary patient diagnoses.)

“TB is particularly fascinating and frustrating,” Beamer said. “We have been living with the disease for thousands of years and have not successfully eliminated it, in part because of an incomplete understanding of how the disease occurs. My role as a veterinarian, pathologist, and scientist is to improve our understanding of this disease that still kills millions.”