Meet Snowball, the Cockatoo with the Dance Moves

More than ten years ago, groundbreaking research by Tufts psychology professor Aniruddh Patel on a sulphur-crested cockatoo—a species of parrot—named Snowball bobbing its head to the beat of a Backstreet Boys song demonstrated that parrots—unlike most species, including monkeys—have the cognitive capacity to anticipate a beat and move to it.

Now a new study by Patel and his colleagues show that parrots hold another similar trait to humans: they can respond to music using a wide variety of movements and body parts. In other words, they can dance.

Patel, who specializes in the mental processes involved in making, perceiving, and responding to music, said that the study, published today in Current Biology, provides insight about the biology and evolution of human musicality by examining how other species process music.

Patel shared three main lessons from the research, along with a cautionary note that large parrots are demanding pets and should not be acquired solely to watch them dance. “It’s fun to watch videos of them, but often people don’t realize how much work it is to have a parrot,” he said. “Snowball has a loving home at the Bird Lovers Only Rescue Service shelter, but many parrots are not as lucky.”

Watch Snowball dance to “Another One Bites the Dust.” Courtesy of Irena Schulz of Bird Lovers Only Rescue Service, Inc.

Snowball’s dancing is spontaneous, not trained. “Snowball was never trained to make any of these moves. He developed his dancing through social interaction with people,” Patel 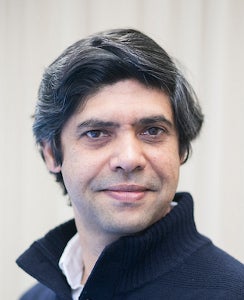 “It’s a response to music that arises when certain cognitive and neural capacities come together in animal brains,” said Aniruddh Patel. Photo: Kelvin Ma
said. “We hadn’t expected to find so many different dance moves, which were revealed by choreographic analysis of our videos by our paper’s first author, Joanne Jao Keehn, a cognitive scientist at San Diego State University and a trained dancer.” The researchers were especially surprised by moves that seemed to be made up by Snowball, because his owner—Irena Schulz, a co-author on the study—doesn’t make those moves when she dances with him.

Dancing to music isn’t just an arbitrary product of human culture. “It’s a response to music that arises when certain cognitive and neural capacities come together in animal brains,” said Patel. Their work with Snowball led the researchers to suggest five distinct capacities that form key evolutionary prerequisites for dancing to music. “We think this helps explain why so few species—and no other primates—share our impulse to move to music in spontaneous and diverse ways,” he said.

The social context for Snowball’s dancing is important. “For humans, dancing is a form of social interaction,” said Patel. “We prefer to dance with partners rather than alone.” Is this also true for Snowball? The researchers hope to find out by analyzing data from another experiment that directly addresses that question.

Dumb and Dumber, Thanks to GPS