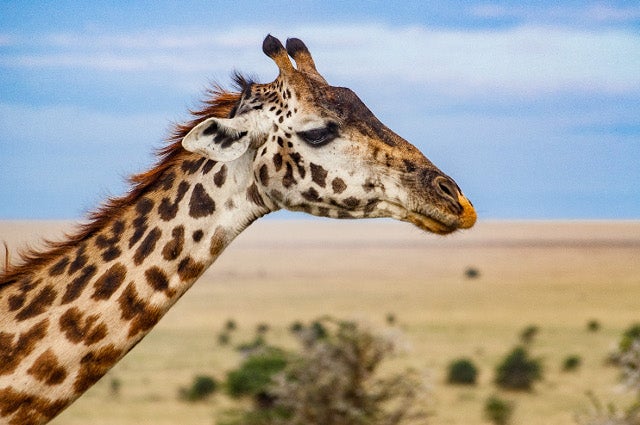 Besides their graceful long necks and legs, giraffes are most recognizable by their distinctive spots. Now conservationists are concerned about a different sort of spots on giraffes, made up of dead tissue and crusty sores that ooze blood or pus.

First seen in wild African giraffes in the 1990s but also observed in captive animals, giraffe skin disease likely is made up of multiple diseases that have been lumped together under one name. “It’s still too soon to tell,” said Cummings School Research Assistant Professor Chris Whittier, V97. “There are probably several possible pathogens involved.”

The resulting unsightly condition doesn’t appear life-threatening by itself. But conservationists worry that it may compromise the animals’ overall health and affect reproduction, leading to population declines, which they can’t afford. 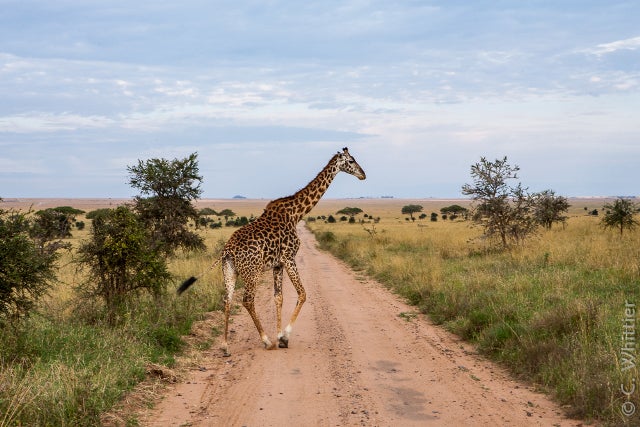 “Giraffes and their ecosystem are facing a lot of threats, and if we don’t do what we can to protect them now, our best efforts soon will be too little too late,” Chris Whittier said. Photo: Chris Whittier
“Universally, giraffes are very much in decline, primarily from habitat loss but also from poaching,” said Whittier, director of Tufts’ master’s in conservation medicine program. “We can’t ignore secondary threats, such as infectious diseases, because any little thing could become an extinction-level event when there aren’t many individuals of certain species left.” (For just such an example, read how a viral goat disease nearly decimated an endangered subspecies of antelope.)

To get the root cause of at least one outbreak of giraffe skin disease, Whittier assisted researchers from the Uganda Wildlife Authority, the Uganda Conservation Foundation, the Global Health Program at the Smithsonian’s National Zoo, and Busch Gardens Tampa Bay. To investigate the condition, the partners worked with staff from the Uganda Wildlife Authority, who immobilized and took skin samples from seven wild giraffes affected by the condition in Murchison Falls National Park. 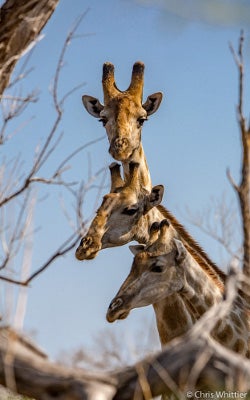 “The study is a really good example of how everyone can work together to utilize all available resources and integrate data to save a wild species,” said team researcher and wildlife veterinarian Suzan Murray, V91. Photo: Chris Whitter
Samples were analyzed first by the pathology department and then the genetics lab at the National Zoological Park in Washington. The researchers found the larval form of a nematode—a parasitic worm barely visible to the naked eye—in cross sections of the diseased tissue. Genetic analysis was used to try to further identify the specific parasite.

“The study is a really good example of how everyone can work together to utilize all available resources and integrate data to save a wild species,” said team researcher and wildlife veterinarian Suzan Murray, V91, director of the Smithsonian’s Global Health Program.

“The team members working in Uganda are experts at anesthetizing giraffes and understanding their natural behaviors,” she said. “And here in the U.S., where we work with species under human care, we have developed expertise in wildlife pathology and molecular diagnostics. It allows us to take what we have learned from individual wild animals under human care and use it in the wild—where we have the chance to save populations.”

In a forthcoming study in Journal of Wildlife Diseases, which will publish online this summer in advance of appearing in the January print edition, the researchers reported that the nematode most likely belongs to a genus called Stephanofilaria.

The parasite commonly spreads among domestic cattle via biting flies, causing a bovine skin affliction known as hump sore, chest sore, or saddle sore, depending on where it occurs. Skin problems caused by these parasites are rare in African wildlife, but have been observed in hippos, rhinos, and spiral-horned antelope called elands.

The team members in Uganda treated four of the affected giraffes with the worming medication used in domestic cattle; they all recovered within a few months.

Whittier and Murray suspect cattle are the parasite’s natural reservoir; an important next step will be to discover if the parasite is cycling between cows and giraffes. 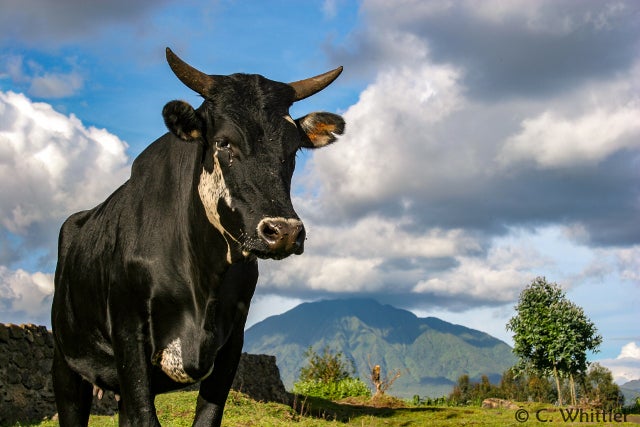 Researchers suspect cattle are the natural reservoir for a parasite that causes giraffe skin disease and worry that the parasite is cycling between cows and giraffes. Here, a domestic cow grazes near Mount Sabinyo in the Volcanoes National Park in Rwanda. Photo: Chris Whitter
“There’s potentially a lot of interface between livestock and wildlife in Africa,” Whittier said. “Even when a national park doesn’t allow cattle grazing inside, that doesn’t mean that it isn’t happening. And often when livestock is allowed in the buffer zone around a national park, there are plenty of places around the edges where the wild animals inside may be separated by only 100 yards from cattle grazing outside. So even though these species are right where they are supposed to be, they’re certainly close enough that flies could be going back and forth between them.”

It’s a complicated situation requiring both health monitoring of threatened wild species such as giraffes and attention to the human condition, Whittier said. “Food security has to be part of our conservation approach, because human food needs are behind the need to graze cattle in places that are close to wildlife.”

With giraffe skin disease spreading throughout East Africa, international scientists continue to investigate the illness in hopes of being able to halt its transmission, said Murray. For example, the Smithsonian deployed a team to work with Kenya Wildlife Services to collect samples from giraffes with skin disease there. Liza Dadone, a veterinarian at the Cheyenne Mountain Zoo in Colorado Springs, collected more samples from giraffes with skin disease in Uganda; she also is collaborating with veterinarians at other zoos to pull together and analyze samples from affected captive animals.

The Smithsonian meanwhile has launched a giraffe-tracking project in Kenya to hopefully better understand how the animals’ movements increase their risk of falling victim to poaching, as well as contracting or spreading infectious diseases.

Whittier is glad to see giraffes getting some serious attention. “As I recently watched my infant son play with his Sophie the Giraffe toy, I was reminded of how ubiquitous giraffes are in children’s culture. Like lions, giraffes are not just icons of Africa, but also universal symbols for wildlife,” Whittier said. “We shouldn’t take them for granted. Giraffes and their ecosystem are facing a lot of threats, and if we don’t do what we can to protect them now, our best efforts soon will be too little too late.”