Helping Police Dogs Injured in the Line of Duty 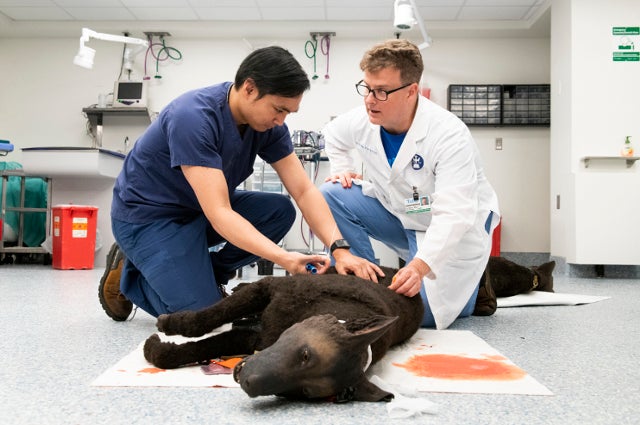 When Sean Majoy, V06, VG13, served on active duty in the U.S. Army Veterinary Corps from 2006 to 2017, one of his jobs as an active Army veterinarian was caring for military working dogs returning injured from Iraq and Afghanistan.

“You got to hear the handlers’ stories and see the dogs’ impact,” Majoy, a clinical assistant professor at Cummings School, said of his time at Lt. Col. Daniel E. Holland Military Working Dog Hospital on Joint Base San Antonio. “The most remarkable thing about the dogs is how good they are at their job, how loyal they are to their handlers, and how many lives they save. The military just can’t replicate what these dogs can do in terms of explosives detection.”

Over his twelve years of active service, Majoy became very fond of German shepherds, Belgian Malinois, and other breeds commonly employed by the Army. These days, he continues his work to help military canines as a reservist with the 422nd Medical Detachment in Rockville, Maryland—a deployable unit capable of fielding a fully operational field hospital for military working dogs.

In addition to being on duty once a month to drill, Majoy regularly trains military-dog handlers, veterinary corps officers, and technicians on how to handle life-threatening emergencies that may occur in military dogs.

“Military dogs are amongst the bravest fighters out there, and they deserve all of the recognition that any of our other soldiers do,” Majoy said.

He thinks the same is true of police dogs, which has led him to work to improve CPR and field trauma care for local and state police K-9s in Massachusetts.

As a clinical instructor and emergency/critical care veterinarian at the Henry and Lois Foster Hospital for Small Animals, he recently conducted a training to teach faculty, staff, and students how to perform canine CPR and other lifesaving first aid. Through a demonstration on two training simulators, Majoy showed how to perform chest compressions, tourniquet a heavily bleeding wound, and more. 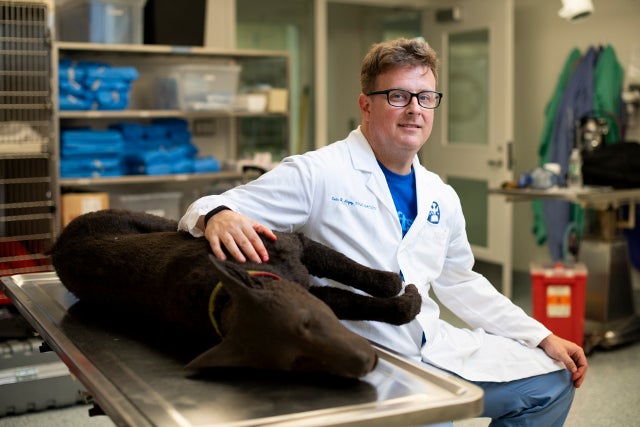 Sean Majoy hopes to continue to provide emergency-response training to clinicians, students, and residents. With that in mind, he and emergency and critical care veterinary technician Mike Santasieri recently became certified in RECOVER CPR, the American College of Veterinary Emergency and Critical Care’s training program for basic and advanced veterinary life support. Photo: Alonso Nichols
When he was on active duty in San Antonio, he helped design one of the simulation models, called the K-9 Hero. “This mannequin has a realistic feel when you’re doing CPR,” said Majoy. “You can do a chest tap to practice for a case where the dog has tension pneumothorax, which can happen from a blast injury. You can intubate and do an emergency tracheostomy, and the mannequin bleeds realistically.”

Majoy said he already uses the two models to teach Marines and other soldiers how to respond in real-life tactical scenarios. “We’ll take one called K-9 Diesel and put it out in a field under tactical conditions,” he said. “The trainees then will have three minutes to figure out what’s going on, pack the wounds, stop the bleeding, treat any immediate life-threatening injuries, and get a medevac called in.”

“A lot of these injuries we train for are analogous to what some of our police officers may see in their K-9s,” Majoy said. “They’re not nearly as likely to encounter canine blast injuries, but certainly their dogs have been stabbed and shot and had other injuries where this training would help a lot.”

Unfortunately, few provisions exist nationally to ensure that K-9s and other operational dogs receive stabilizing on-the-scene emergency care and safe transport if they’re injured in the line of duty.

For example, under current Massachusetts law, emergency personnel cannot treat, transport, or provide emergency medical attention to K-9s. However, one-quarter of 85 surveyed police departments reported having an injured K-9 that needed to be transported in the last ten years.

That’s why on July 18 Majoy is headed to the Massachusetts State House to testify alongside other veterinarians, EMS personnel, and K-9 handlers in support of “Nero’s Bill.”

Introduced by state Representative William Crocker and state Senator Mark Motigny, the legislation is named in honor of a Yarmouth police K-9, who along with his handler, Sergeant Sean Gannon, was shot while attempting to serve an arrest warrant in 2018. Gannon didn’t survive the shooting, but Nero did, thanks to a retired K-9 officer who was called in to assist and rushed the dog to the closest animal hospital. (The K-9 made a full recovery and has since been adopted by Gannon’s family.)

If passed, Nero’s Bill would require EMS providers to provide emergency care and transport to K-9s and other operational dogs injured in the line of duty. The legislation also would require first responders to undergo training in line with standards set by the state’s Office of Emergency Medical Services.

Majoy hopes that by sharing his experiences in the military with state legislators, he shows that such treatment for K-9s is not just the right thing to do, but also very feasible.

“In the military, the dogs are treated just like a soldier,” he said. “We train our working-dog handlers to do lots of emergency care for their dogs just like a basic EMT might do for people, and some combat medics get similar veterinary training as well. Even our non-veterinary medical folks down range have some prehospital veterinary training. For example, if a military dog is injured and needs to get out on a Blackhawk to medical support, it will be evacuated and also treated en route.”

The military “developed the right sort of standardized training and care out of need years and years ago,” said Majoy, “and we can use what we’ve learned to prepare our EMS personnel to help our K-9s and other operational dogs.”