As Congress orders an investigation of whether the Pentagon is to blame for the Lyme disease epidemic, a Cummings School expert explains why that’s a waste of public time and money 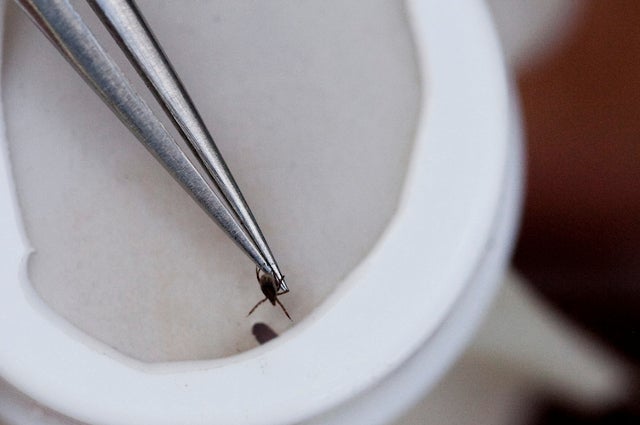 The U.S. House of Representatives last week voted to order the Department of Defense to investigate if the Pentagon developed ticks as biological weapons—which later escaped or were unleashed to cause the current national Lyme disease epidemic.

The idea that the national Plum Island Animal Disease Center was responsible for Lyme disease in America, because of tick experiments done there from the mid-1950s through the 1970s, has been floating around for decades.

But it’s completely wrong. “This conspiracy theory was soundly debunked by research that David Persing and I did in the early 1990s,” said Cummings School Professor Sam Telford, a leading expert on infections spread by mosquitos and ticks.

For their studies, which were published in Science and the Journal of Infectious Diseases, Persing and Telford tested museum specimens of white-footed mice and deer ticks to see if they had DNA evidence of being infected with B. burgdorferi, the bacterium responsible for Lyme disease.

It turned out that the bacterium was circulating in wildlife long before Lyme disease became a known illness in humans. Ticks collected in 1945 from the eastern end of Long Island and mice collected in 1894 on Cape Cod were found to be infected with B. burgdorferi.

This means that B. burgdorferi already existed in wildlife on Long Island—neighbor to Plum Island—for nearly ten years and on Cape Cod for fifty years before the time period in question.  And Ft. Terry, the predecessor to the Plum Island facility, wasn’t even activated by the Army Chemical Corps until 1952, noted Telford.

He added that the conspiracy also doesn’t account for Lyme disease and B. burgdorferi being found in areas geographically removed from the U.S. research facility in question, such as the upper Midwest, the Pacific Coast, and across the southern U.S.

Some of those who believe that the U.S. government is behind the Lyme disease epidemic argue not that it originated at Plum Island, but that the U.S. Army engineered the bacterium responsible so that it was more transmissible.

“However, if such a strain of the bacterium came out of the lab, there would be evidence for a single source for Lyme disease,” Telford said. “And genetic data in the scientific literature do not support a ‘point source’ origin for Lyme on this continent.”

“The real reason we have lots of Lyme disease now is because we let the forest grow back, we live around these forests with all the animals, and we have failed to adequately manage the deer population,” Telford explained.

“Government time would be better spent crafting legislation that tries to do something to prevent Lyme disease, as opposed to trying to lay blame,” he said.

Plotting the End of Lyme Disease

A Vote Against Lyme Disease