A World Without Rinderpest

Cummings School’s Jeffrey Mariner, who played a key role in eradicating the devastating cattle plague from the wild, weighs in on an effort to destroy laboratory samples of the virus 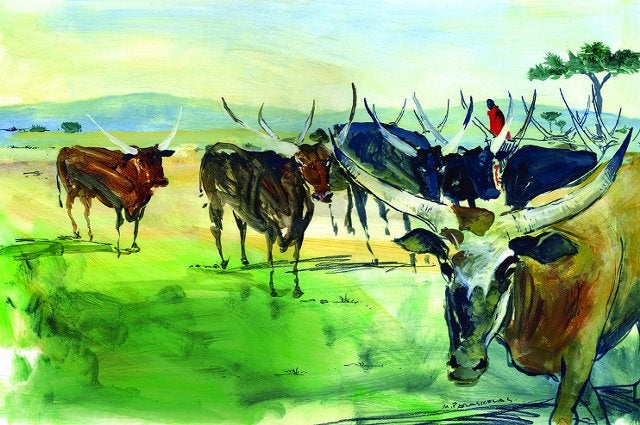 Rinderpest, a highly contagious cattle disease that killed millions of cows—leading to the starvation of countless people—over thousands of years, was declared eradicated in 2011. It’s only the second virus in history after smallpox ever to have been extinguished from the planet.

Until now, research samples of the highly contagious virus have remained in secure laboratories around the world—creating a risk that rinderpest could return and once again wreak havoc on cattle populations.

“If rinderpest reemerged, the whole world is susceptible. It’s a small risk but the consequences would be very large,” said Jeffrey Mariner, V87, a research professor at Cummings School of Veterinary Medicine who played a key role in eradicating rinderpest in the wild. “The most likely cause of reappearance would be a laboratory error or accident.”

However, a lab in the U.K. is now helping to put those concerns to rest. The Pirbright Institute in Surrey, England, recently destroyed most of the world’s remaining rinderpest samples. The lab had worked with the World Organisation for Animal Health (OIE) and the Food and Agriculture Organisation of the United Nations (FAO) to gather rinderpest samples from labs around the globe. Then the Pirbright Institute sequenced the DNA to preserve the genetic data in case it’s needed to develop a vaccine for a future outbreak. With the DNA sequencing complete, the samples were destroyed.

Mariner said the decision to destroy the rinderpest stock was an appropriate one. “The question was, is there any justifiable research to be done with live agents?” he said. “I don’t think there really is for rinderpest.”

He would know. He’s a global infectious disease specialist who created the heat-stable vaccine that ultimately eradicated rinderpest, a German word that translates to cattle plague.

Flash back for a moment to the 1890s, when a rinderpest outbreak in Africa killed 80 to 90 percent of cattle, buffalo, giraffe, wildebeest, kudu, and antelopes. Once the virus affected a herd, it spread and was nearly 100 percent fatal. There were no animals to plow fields, to use for travel, or for people to eat. This led to mass starvation so severe that an estimated one-half to two-thirds of the human population of East Africa died.

This plague hit other continents, including Asia and Europe, which led to an international effort to control the virus. Though a vaccine was developed, the original version was not easily transported and lost effectiveness in hot temperatures—which meant it would not work in the Sahara, for example.

This is where work by Mariner and colleagues at Cummings School and The Fletcher School of Law and Diplomacy comes in. Around 1983, the researchers sought and received funding from the United States Agency for International Development (USAID) to develop a heat-stable vaccine at what was then the USDA Plum Island Animal Disease Center.

“The USDA was focused on adapting the vaccine strain of virus to continuous cell line culture systems but not the thermostability of the vaccine, so we worked for two years focusing on the thermostability aspects,” recalled Mariner, then a Cummings School student. “We improved the way the vaccine is freeze-dried and created one that could last for eight months at 37 degrees Celsius (98 degrees Fahrenheit). It could be used in the field without refrigeration for up to thirty days and still had a wide margin of safety.”

The Tufts team proposed the vaccine to the African Union and the OIE, which helped transfer the technology to African labs and get the vaccine in production. By 1993, the rinderpest vaccine became available in commercial quantities—the most-purchased type was the heat-stable version.

The next challenge was getting the vaccine everywhere it needed to go. Mariner and others brought the vaccine into some of the most remote areas of the world—“countries such as South Sudan, Somalia, Uganda, and Ethiopia were the last reservoirs of infection,” he said—and trained local agricultural workers on basic vaccination techniques.

“I don’t know if we would have succeeded if we didn’t have that approach in place: the heat-stable vaccine combined with new appropriate delivery systems,” Mariner said. “The last outbreaks of rinderpest occurred around 2001 and after that the disease was essentially gone. Vaccination was stopped to facilitate the validation of eradication and after a decade of surveillance, the United Nations declared rinderpest fully gone in 2011.”

Up Next: Fighting a Rinderpest Relative

With rinderpest eradicated from the wild, what’s next for Mariner, who has spent thirty years fighting diseases in livestock populations? He’s working to put an end to another virus in the same family as rinderpest called peste des petits ruminants (PPR), which mainly affects sheep, goats, and saiga antelopes in Asia.

“The viruses are almost identical, but the type of species the virus likes to infect is different,” Mariner said. “We took the same process we used for rinderpest and applied it to PPR, so the vaccine lasts five months at 37 degrees Celsius and thirty days in the field without refrigeration.”

Tufts is currently working with international vaccine producers in Africa and Asia, with support from USAID, to establish commercial scale production of thermostable PPR vaccine and to develop more appropriate vaccination programs in the field.

Mariner’s research, and the research at Cummings School, means that one day, PPR might become the third virus ever eradicated from the planet.