Finding a Gene That Regulates Sleep

Tufts researchers discover a gene necessary for maintenance of healthy sleep in fruit flies, which might help understand human sleep 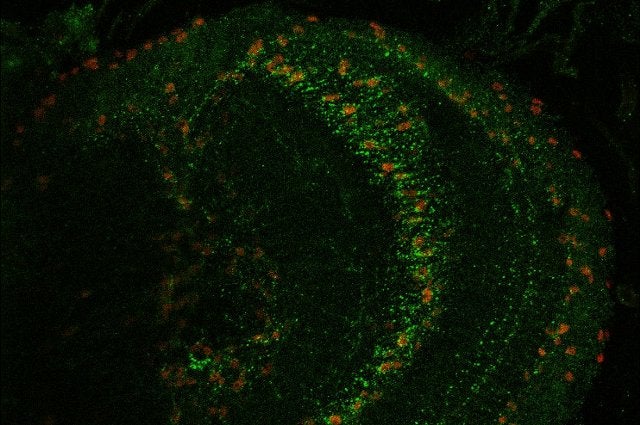 What keeps us awake—and helps us fall asleep? The answer is complex, but involves what are called circadian rhythms, which are found in all species with sleep-wake cycles—physical, mental, and behavioral changes that follow a regular schedule.

In most animals, that cycle is twenty-four hours, and is dependent on environmental signals like light. It is regulated by a “master clock” in animals brains, comprised of a group of neurons regulating sleep and other circadian processes. Sleep is also, of course, regulated by so-called “sleep pressure,” which comes into play when humans or other animals are deprived of sleep.

Rob Jackson, a professor of neuroscience at the School of Medicine, leads a lab that has been studying circadian rhythms and their genetic basis for more than thirty years. He uses fruit flies—Drosophila melanogaster is the scientific name—to study the phenomenon, since they have twenty-four-hour circadian clocks and sleep cycles similar to those of humans. “Remarkably, many of the genes underlying their rhythmic behaviors have human counterparts,” he said.

Jackson’s lab was the first to identify a critical role of astrocytes as important regulators of circadian rhythms. Astrocytes are glial cells of the brain that had long been thought of as support cells—brain glue, hence the name glia—but are now known to play much more important roles. Jackson and his colleagues also discovered that fly astrocytes secrete signaling factors to communicate with neurons, regulating sleep behavior. 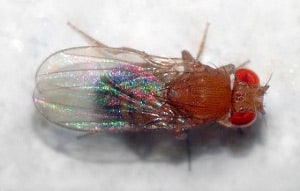 Fruit flies that lack NKT gene expression have decreased night sleep, while their sleep during the day is normal—and yes, flies take afternoon naps. The NKT gene is expressed at high levels in fly astrocytes and at low levels in their neurons, and is required in both cell types for normal night sleep.

In addition to Jackson, the research team included Sukanya Sengupta, Lauren B. Crowe, Samantha You, and Mary A. Roberts from Tufts University School of Medicine.

Tufts Now spoke recently to Jackson about the findings, and what they might mean for people suffering from sleep issues.

Tufts Now: So, how do flies sleep exactly?

Rob Jackson: Flies sleep in bouts like us, but the sleep bouts are shorter in duration, on average about two to five hours long. Interestingly, there is also a sex difference for fly sleep, with males sleeping at night, but also taking a “siesta” during the day, while females predominantly sleep at night. In the flies generated in our lab to have little or no NKT expression, the bouts of sleep are abnormally short in duration and occur more frequently, leading to reduced consolidation—fragmented and disrupted sleep.

Why are flies a good model to study sleep?

Fly sleep has properties similar to human sleep. For example, the cell types—neurons and astrocytes—and brain neural circuits that regulate sleep are similar in humans and Drosophila. Furthermore, flies sleep more when deprived of sleep, and they do not respond to external stimuli as readily when sleeping, such as when they have increased “arousal” threshold, similar to humans.

In addition, drug targets affecting sleep are similar in flies and humans. Finally, flies have a small, manageable genome that has been sequenced and can easily be manipulated, and the majority of fly genes have human counterparts, making them a great choice for studies of human disease.

What techniques do you and your lab use to study circadian rhythms in flies?

My lab uses genome-wide expression profiling, which is a fancy way to say we can identify all the genes expressed in a particular cell type. Using genetic techniques, we then ask which genes are important for circadian rhythms or sleep. We use automated activity-monitoring systems to trace fly circadian locomotor activity rhythms and sleep. We also use a sophisticated imaging technique—confocal microscopy—to visualize specific cell types or proteins in the brain that might be required for rhythmic behaviors. These tools allow us to better understand the role of specific genes in sleep behavior or circadian rhythms.

What is the mechanism for NKT to affect sleep?

That’s a good question, and at present we don’t know the full answer. We do know that NKT protein is secreted from cells to promote sleep, and we hypothesize that it acts as a communication mechanism for activation of sleep-regulating neurons. Unpublished results from our lab have identified a potential receptor for NKT on neurons and suggested that NKT may regulate mechanisms required for inhibition of specific neurons. Such an inhibition of neuronal activity is what promotes sleep.

Yes, there are other fly genes that seem to be important for day sleep but not night sleep, and this suggests that there are separate mechanisms controlling the two types of sleep.

What happens when circadian rhythms or sleep are disturbed?

Disrupted circadian rhythms or sleep can lead to serious health consequences, including obesity, risk of cardiovascular events, and cognitive impairments such as mood disorders. Indeed, sleep is vital for life in most organisms, including flies and humans. Anyone who has experienced jet lag or had a bad night’s sleep understands the importance of circadian and sleep mechanisms.

How do your NKT findings translate to human health?

What are your next steps studying NKT and circadian rhythms?

We know that NKT protein is secreted from astrocytes to promote sleep, and we would like to know what neurons it activates. Since the complement of sleep-regulating neurons has been identified in flies, and they are similar to their human counterparts, we know where to look in the brain, and we will employ genetic and imaging methods to ask which neurons are activated by NKT secretion from astrocytes.