Academics from around the world will gather at the university to offer new ideas about imaging challenges in mathematics, medicine, and more 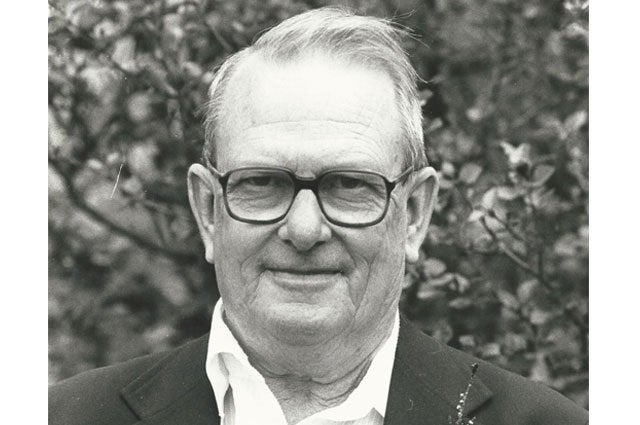 Allan Cormack, a professor of physics at Tufts, received the 1979 Nobel Prize for Physiology or Medicine for his part in developing the mathematics and hardware that made possible CT scans, which revolutionized medical imaging and health care.

Next week, Tufts honors Cormack on the fortieth anniversary of his Nobel with the conference Modern Challenges in Imaging. One of the conference organizers, Todd Quinto, the Robinson Professor of Mathematics, first met Cormack in 1978. “Allan was a humble physics professor who was a mentor to me during the beginning of my career,” he said. “He introduced me to the applied end of the field and motivated my first applied research. We wrote several articles together, and we enjoyed talking and doing mathematics together.”

Now Quinto is helping gather researchers in math, science, engineering, and medicine from all over the world for the conference, which will include the research of Tufts faculty members. The conference will focus on imaging for health and medicine, industrial problems such as finding defects in parts using nondestructive evaluation, and oil exploration.

In addition to Quinto, other conference organizers are Tufts professors Fulton Gonzalez, Misha Kilmer, and Eric Miller, along with Bernadette Hahn and Gaël Rigaud from the University of Würzburg. Hahn and Rigaud are part of the new generation of tomography researchers, Quinto said. Hahn’s work combines theoretical analysis with algorithm development, for example, for tomography when the body moves during the scan, while Rigaud works on novel problems, including Compton scattering tomography and emission CT.

Tufts Now spoke with Quinto recently to learn more about Cormack, who died in 1998, and the upcoming conference.

Tufts Now: How did Allan Cormack’s work lead to the development of CT scanning?

Todd Quinto: Allan Cormack proposed and developed a method to detect the internal structure of the body using X-rays from different directions. He developed a mathematical algorithm to do this and then built a rudimentary scanner to show his method worked. He made the revolutionary hypothesis that if one X-rayed from more than two directions, one could get better information.

At that time, it was not at all obvious how to put those pictures together to get a clear picture of the inside of the body, but he invented an algorithm to do this. To prove his hypothesis, he designed a simple prototype CT scanner—built in the basement of the physics department—to scan a test piece of Pyrex. He did calculations by hand and with a crude calculator to show that his algorithm did a reasonable job predicting the density.

In 1979, he won the Nobel Prize along with Godfrey Hounsfield. The morning Allan learned that he had been awarded the prize, he taught his elementary physics class. Word had gotten out, and the class was filled with faculty members and administrators as well as students. He received a standing ovation when he entered the room—and then he continued to teach the class.

What are the biggest challenges in imaging today?

Perhaps the most important challenge, which we will be covering at the conference, is how to deal with new ways to collect data, including radar, sonar, emission tomography, Compton tomography, and ultrasound—plus other new methods that are being developed every year. Each way of collecting data has a different mathematical model—and different ways to interpret that data.

Machine learning and data science are important new methodologies that will be represented at the conference, too. Rather than developing rigorous mathematical algorithms to find an object, they “compare” the data to data of many known objects and use this to decide what the object could look like. The results are exciting, because they can give better results than standard methods, even in the most challenging problems.

The biggest challenge I study is limited data tomography—an area Allan introduced me to. Standard CT scanners take X-ray data from all around the body—they see it from every angle. In many cases, though, it’s not possible to do this, so we use mathematics to compensate for the missing data. I develop mathematics to describe what you can see and then work with colleagues to develop algorithms that will take advantage of this information to obtain the best picture of the object for different types of tomography data.

Other Tufts faculty are speaking at the conference—can you describe their work in imaging research?

From Cormack’s time to the present, Tufts has had a highly regarded—and highly interdisciplinary—history of work on a wide range of tomographic problems. The work encompasses the pure to the applied.

Professor Fulton Gonzalez focuses on pure mathematics related to tomography, applying methods from algebra and geometry to solve theoretical questions related to reconstructing images via inversion formulas. I investigate the interplay between pure mathematics and applications. The efforts of my colleagues Misha Kilmer, in the mathematics department, and Eric Miller, from the electrical and computer engineering department, are on the more mathematically applied and engineering aspects of tomography; this is evident in the broad collection of applications where they have contributed, including subsurface sensing, bio-optical imaging, and tomographic processing and modeling for security applications.

Moving well beyond anything that Allan Cormack could have predicted, his impact on Tufts will resonate throughout the meeting as biomedical engineering professor Sergio Fantini discusses his tomographic imaging systems and processing methods for using infrared light to detect breast cancers and image the brain, while University Professor and former dean Linda Abriola will review her work in tomographic inspired ideas for determining the composition and extent of chemical contamination in the earth’s subsurface.

Finally, we want to acknowledge the support we have received for this meeting. In addition to grants from NSF, NIH/NIBIB, and Tufts, we received support from the Institute of Physics in the UK. Tufts benefactor Bernard Gordon [H92], Jay Stein of Hologic, and the company Mobius Imaging and its co-founder Gene Gregerson [AG92] have contributed generously to this wonderful opportunity to celebrate both Allan Cormack and the continued history of this work at Tufts.

Should I Get a COVID Booster and Flu Shot at the Same Time?