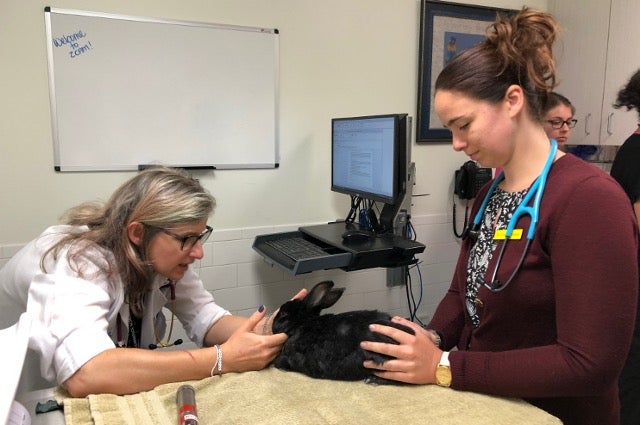 Gastrointestinal issues are the most common emergency that brings pet rabbits—the third most popular companion small mammal in the U.S.—to the Foster Hospital for Small Animals.

Bunnies develop life-threatening complications quite easily from stress, improper diet, dental disease, exposure to toxins such as lead, and other common circumstances. “They are very sensitive little animals,” explained Associate Professor Jennifer Graham, head of the Zoological Companion Animal Medicine Service at Cummings School. “When it comes to GI problems, rabbits can die in a much shorter period than dogs or cats. If a rabbit hasn’t eaten or pooped in twelve to twenty-four hours, the owner needs to get it to a clinic right away.”

However, many GI diseases and problems outwardly look the same in pet rabbits. Knowing if—and how—the gut is functioning could help veterinarians narrow the list of possible causes to begin treatment.

With that in mind, Graham and her research partners at Cummings School recently studied if ultrasound can reveal normal movement, or motility, of pet rabbits’ gastrointestinal system.

Similar studies have been done in humans, horses, and dogs, and as a result, their clinicians use ultrasound to look at movement of the GI tract to evaluate motility. With the information on normal motility, ultrasound can better be used to differentiate underlying diseases and conditions.

“If sick bunnies are painful and stressed, we may use a sedative to help make them more comfortable,” explained Graham. “We wanted to know if sedatives affect the motility of a rabbit’s GI tract to the point that it changes what we see with ultrasound.”

In the July issue of the American Journal of Veterinary Research, the researchers reported that ultrasound indeed can accurately show normal motility in pet rabbits’ small intestines. Ultrasonography also appeared an accurate way to assess the movement of the small intestine, regardless of whether the rabbits had been sedated.

The research helps pave the way for veterinarians to better use the imaging technique to diagnose rabbits with GI symptoms. Ultrasound can have some benefits over radiographs—X-rays—both of which are noninvasive methods commonly used to look at rabbits’ GI systems.

For starters, “we may be able to perform some ultrasounds with a rabbit sitting upright as it normally might, versus having to stretch it out to take radiographs”—positioning that can require the pet to be sedated, added Graham. While radiographs can reveal a buildup of gas in a pet rabbit that points to a problem, they do not show the movement of the GI tract. “So ultrasound gives us information on how the intestines are actually working versus providing a static image,” Graham said.

She explained that this information is key to distinguishing between when GI symptoms are caused by something blocking the intestines, versus GI stasis, which is when the intestines having slowed down or stopped contracting normally because of another underlying issue.

Currently, veterinarians often perform exploratory surgery to get to that answer in species such as dogs and cats. Surgery is much riskier in rabbits and best avoided unless absolutely necessary; Graham hopes this study will help some rabbits avoid unnecessary surgery.

Whether veterinarians can take the team’s findings and build on them to apply ultrasound to diagnosing sick rabbits, of course, remains to be seen, Graham said. “But the first step is always determining a baseline for normal.”