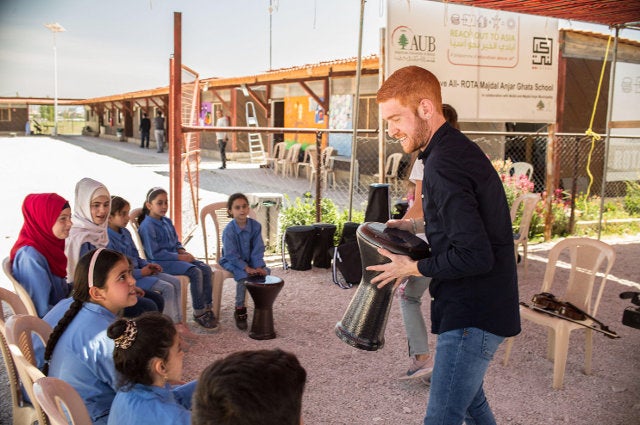 Studying how to play the violin as a child growing up in Jordan, Layth Sidiq picked up more than bowing practices and sight reading. “I learned so many things about the discipline of practicing an instrument and how to work and communicate with other members of a group,” said Sidiq, director of the Tufts Arab Music Ensemble.

The Iraqi-born musician went on to study at the National Music Conservatory in Amman and later the Berklee Global Jazz Institute before coming to teach at Tufts, but never forgot about those early days. That’s why this May he partnered with the Kayany Foundation to travel to Lebanon and teach music to Syrian children at two refugee schools.

Sidiq came bearing derbake drums donated by Tufts and the Berklee College of Music, and the goal to teach not just melodies, but collaboration and discipline, as he does with his Tufts students. “I wanted to make sure they were all one group—if one person succeeds, everyone succeeds,” said Sidiq.

Working with fifty students as young as nine and as old as fifteen, Sidiq taught them how to hold their instruments, how to mix light and strong beats, and how to help rather than compete with each other, especially when someone was struggling.

“My idea was to have them learn a few simple ideas about how to play as a group, how to lead an ensemble, and how to be part of a team and community. Those are values everyone should learn, not just musicians,” he said. “It’s especially important for these kids, who will be the next generation to rebuild their homes and their country again.”

Sidiq had the students practice folkloric songs whose lyrics interweave stories of daily life and love with images of the trees and rivers of the Middle East. He teaches the Tufts Arab Music Ensemble those same songs, wanting his students “to understand something good about that region, which has been badly misrepresented in recent years,” he said.

For his Syrian refugee students, his goal was a bit different. “It’s important when I go back to the Middle East to reinforce these songs, which are in danger of becoming extinct, to young and old Arab students,” he said. “We have a responsibility as artists to do that—to keep the oxygen of this culture alive.”

Sidiq’s workshops have helped do just that. When he arrived back home in Boston, he got word that his Syrian students were teaching their friends the songs they had learned. “After I left, the magic spread,” said Sidiq, who is working on a plan to implement a sustainable music program in Lebanon.

For now, he hopes the magic keeps spreading, connecting children to their culture and setting them up for survival and success in the future. “It’s a way to instill in them these values,” Sidiq said. “Not only about music, but about many other things—who they are, what their identities are, and what they can become.”