Hope for Dogs with Bone Cancer 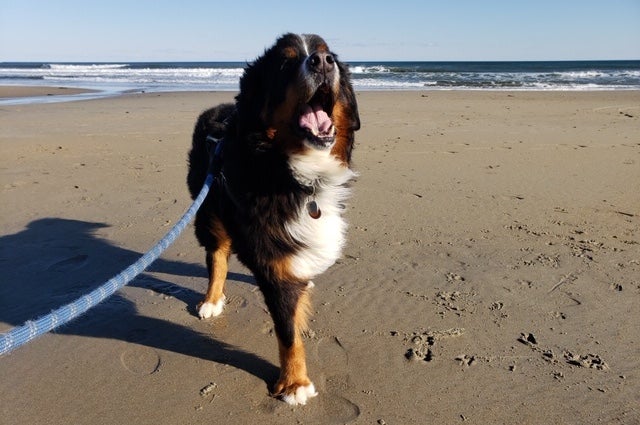 When Truman, a Bernese mountain dog, started limping in March 2018, his owners did not waste any time getting him to a veterinarian. Unfortunately, X-rays and a subsequent biopsy revealed that Truman had osteosarcoma in his left front leg.

An aggressive bone cancer that strikes more than 25,000 dogs annually, osteosarcoma has a dire prognosis. More than 90 percent of affected dogs succumb to the disease within two years—despite amputation of the affected leg, followed by chemotherapy to stop or slow the cancer’s spread.

The cancer is common in large-breeds dogs, and one of Truman’s littermates had passed away from osteosarcoma only several months before his diagnosis. Fearing the same fate for her pet, Jill Larivee said, “her mental wheels started turning.”

As an employee at Pfizer, Larivee was familiar with clinical trials of experimental drugs in humans. “I knew there had to be new therapies out there that might help Truman,” she said. Her research eventually led her to the Clinical Trials Office at Cummings School of Veterinary Medicine.

At the Henry and Lois Foster Hospital for Small Animals, Cheryl London, V90, Anne Engen and Dusty Professor in Comparative Oncology at Cummings School, leads the team that’s conducting studies of new therapies that seek to enlist the body’s own immune system to recognize and destroy cancer cells. Known as immunotherapy, the approach has shown promise in the fight against several kinds of once impossible-to-treat human tumors, such metastatic lung cancer and melanoma.

Truman qualified for a study of a new immunotherapy that functions like a vaccine by triggering the body to hunt down bone-cancer cells. The clinical trial was being offered as part of the Comparative Oncology Trials Consortium, a program of the National Cancer Institute with more than twenty participating sites.

After Truman had his affected leg amputated and finished four rounds of chemotherapy, Larivee signed him up for a series of three injections of the experimental therapy.

Since completing the clinical trial in September 2018, Truman has had his lungs checked by chest X-rays every two months to see if the cancer has spread. Today, almost a year later, Truman remains cancer-free.

The clinical trial that enrolled Truman has since ended. However, Tufts researchers are continuing their work to improve the treatment of osteosarcoma, which hasn’t seen a significant medical breakthrough in nearly three decades.

At Foster Hospital, another clinical trial is evaluating the effectiveness of two new immunotherapies, given in combination with chemotherapy, in treating osteosarcoma that has spread to dogs’ lungs. The researchers hope to discover drug combinations that either stop or shrink the growth of metastatic osteosarcoma.

Dogs participating in the study will undergo minor blood draws to monitor their health, as well as to enable scientists to conduct genetic analyses that could help future pets and people.

For example, using such samples from pets being treated for bone cancer at Cummings School, a team of researchers from Tufts and the Translational Genomics Research Institute (TGen) in July published findings of a study of genetic similarities between osteosarcoma in dogs and children.

A relatively rare cancer in people—with fewer than 1,000 cases each year—osteosarcoma primarily affects children. Although surgery and chemotherapy can extend survival, about 30 percent of pediatric osteosarcoma patients die from metastatic tumors within five years.

Given that osteosarcoma is much more common in pet dogs, “the genetic similarity between dogs and humans provides a unique opportunity and a comparative model that will enable the development of new therapies within a compressed timeline,” said veterinarian Heather L. Gardner, a Ph.D. candidate in Tufts’ Sackler School of Graduate Biomedical Sciences and the study’s lead author.

Larivee said she’s proud and grateful that Truman’s participation in the trials has advanced scientists’ understanding of osteosarcoma.

“My hope was always that something good could come out of his cancer diagnosis,” she said. “I hoped maybe Truman could be a data point in getting that vaccine approved or in finding something else that could really be beneficial for some dogs and kids.”

As for Truman, life on three legs is as good as on four. “He’s very spirited and happy—the Truman I knew before he got sick,” Larivee said. “He gets up and does the same things he used to do without being in pain, which was what was most important to me.”