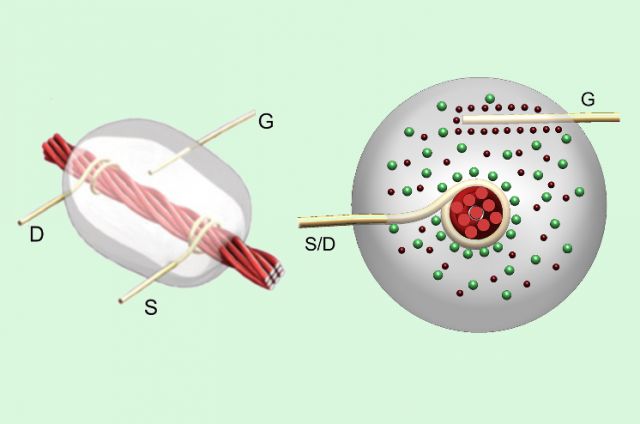 A team of Tufts University engineers has developed a transistor made from linen thread, enabling them to create electronic devices made entirely of thin threads that could be woven into fabric, worn on the skin, or even (theoretically) implanted surgically for diagnostic monitoring. The fully flexible electronic devices could enable a wide range of applications that conform to different shapes and allow free movement without compromising function, the researchers say.

In a study published in ACS Applied Materials and Interfaces, the authors describe engineering the first thread-based transistors (TBTs) which can be fashioned into simple, all-thread based logic circuits and integrated circuits. The circuits replace the last remaining rigid component of many current flexible devices, and when combined with thread-based sensors, enable the creation of completely flexible, multiplexed devices.

The field of flexible electronics is expanding rapidly, with most devices achieving flexibility by patterning metals and semiconductors into bendable “wavy” structures or using intrinsically flexible materials such as conducting polymers. These “soft” electronics are enabling applications for devices that conform and stretch with the biological tissue in which they are embedded, such as skin, heart or even brain tissue.

However, compared to electronics based on polymers and other flexible materials, thread-based electronics have superior flexibility, material diversity, and the ability to be manufactured without the need for cleanrooms, the researchers say. The thread-based electronics can include diagnostic devices that are extremely thin, soft and flexible enough to integrate seamlessly with the biological tissues that they are measuring.

The Tufts engineers previously developed a suite of thread-based temperature, glucose, strain, and optical sensors, as well as microfluidic threads that can draw in samples from, or dispense drugs to, the surrounding tissue. The thread-based transistors developed in this study allow the creation of logic circuits that control the behavior and response of those components. The authors created a simple small-scale integrated circuit called a multiplexer (MUX) and connected it to a thread-based sensor array capable of detecting sodium and ammonium ions – important biomarkers for cardiovascular health, liver and kidney function.

“In laboratory experiments, we were able to show how our device could monitor changes in sodium and ammonium concentrations at multiple locations,” said Rachel Owyeung, a graduate student at Tufts University School of Engineering and first author of the study. “Theoretically, we could scale up the integrated circuit we made from the TBTs to attach a large array of sensors tracking many biomarkers, at many different locations using one device.”

Making a TBT (see Figure 1) involves coating a linen thread with carbon nanotubes, which create a semiconductor surface through which electrons can travel. Attached to the thread are two thin gold wires – a “source” of electrons and a “drain” where the electrons flow out (in some configurations, the electrons can flow in the other direction). A third wire, called the gate, is attached to material surrounding the thread, such that small changes in voltage through the gate wire allows a large current to flow through the thread between the source and drain –the basic principle of a transistor.

A critical innovation in this study is the use of an electrolyte-infused gel as the material surrounding the thread and connected to the gate wire. In this case, the gel is made up of silica nanoparticles that self-assemble into a network structure. The electrolyte gel (or ionogel) can be easily deposited onto the thread by dip coating or rapid swabbing. In contrast to the solid-state oxides or polymers used as gate material in classical transistors, the ionogel is resilient under stretching or flexing.

“The development of the TBTs was an important step in making completely flexible electronics, so that now we can turn our attention toward improving design and performance of these devices for possible applications,” said Sameer Sonkusale, professor of electrical and computer engineering at Tufts University School of Engineering and corresponding author of the study. “There are many medical applications in which real-time measurement of biomarkers can be important for treating disease and monitoring the health of patients. The ability to fully integrate a soft and pliable diagnostic monitoring device that the patient hardly notices could be quite powerful.”

This research was supported by the National Science Foundation NSF IGERT grant #DGE-1144591.