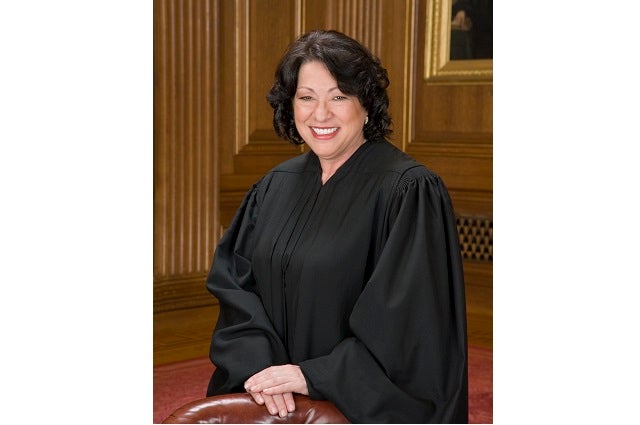 MEDFORD/SOMERVILLE, Mass. (Aug. 27, 2019)—Tufts University will host Sonia Sotomayor, Associate Justice of the Supreme Court of the United States, on Thursday, Sept. 12, at 3:30 p.m. in the Gantcher Family Sports and Convocation Center on Tufts' Medford/Somerville campus.

The conversation with Justice Sotomayor will be moderated by Peter Winn, professor of history in Tufts' School of Arts and Sciences. Justice Sotomayor has a long relationship with Winn, who served as her senior thesis advisor at Princeton University.

"Justice Sotomayor offers a shining example of a life dedicated to public service and civic good—values that are at the heart of our university," said Anthony P. Monaco, president of Tufts University. "She is an inspiration to our students, staff and faculty, and the Tufts community is excited to hear the Justice's discussion with her longtime friend, Professor Winn."

This event is free and open to Tufts faculty, staff and students, though a ticket is required. More information about ticketing for those eligible is available here.

The event is open to members of the news media, with some restrictions. Media members must register in advance by contacting Robin Smyton via email at robin.smyton@tufts.edu or by phone at 617-627-5392.

President Barack Obama nominated Sotomayor as an Associate Justice of the Supreme Court in May 2009, following the retirement of Justice David Souter. She was confirmed by the Senate in August, becoming the Supreme Court's first Hispanic justice.

Before joining the nation's highest court, she served as assistant district attorney in the New York County District Attorney's Office from 1979 to 1984. Sotomayor then litigated international commercial matters in New York City at Pavia & Harcourt, where she was an associate and then partner until 1992.

In 1991, President George H.W. Bush nominated her to the U.S. District Court, Southern District of New York, where she served until 1998. She then served as a judge on the United States Court of Appeals for the Second Circuit, in New York City.

Justice Sotomayor is the author of three books, including a new children's book, "Just Ask! Be Different, Be Brave, Be You."