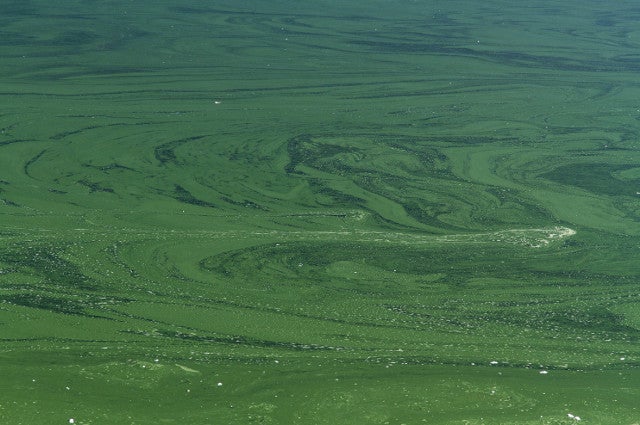 When we see green, scummy water, we know better than to drink it or even swim in it. But the same is not true for many dogs, and that green scum could be a toxic blue-green algae bloom, which can be fatal to animals.

Several dogs have died this summer after swimming in water contaminated by blue-green algae. Most of the deaths have been in southern U.S. states such as North Carolina, Texas, Tennessee, and Georgia. However, dog deaths in Minnesota and Colorado also are suspected to be the result of toxic blue-green algae.

Toxic algae blooms can occur throughout the U.S. and Canada, according to the U.S. Environmental Protection Agency. They come in different colors, including red and brown, and can occur in fresh or salt water. The blue-green algae making headlines recently is also known as cyanobacteria.

“Cyanobacteria generally blooms in warm, still waters. That’s why we see surges in the summer,” said Tara Hammond, V03, a Tufts critical care veterinarian at Tufts VETS in Walpole, where she oversees the emergency room and the intensive care unit. But toxic algae blooms can occur at any time of year under the right conditions. Blue-green algae prefers water with high amounts of certain nutrients, such as nitrogen and phosphorus.

Cyanobacteria often appear green with a blue shimmer, and usually have a foul smell—think rotting plants. The algae may appear thick and scummy, or it may look like spilled paint on the surface of the water. Sometimes toxic algae blooms are small and may not be easily seen, which can make it more difficult for dog owners trying to keep their pets safe.

“Generally, if there’s green slime in the water, it’s pretty suspicious, and you don’t want your dogs to go in,” Hammond said. Not all algae blooms are harmful, though. They can become dangerous when they produce toxins in high concentrations.

Animals are exposed to the toxins if they swallow the water—either by drinking it, licking it off their fur, or eating contaminated seafood—swim and come in contact with it on their skin and eyes, or breathe in the toxins, if the toxins have become airborne.

How can you tell if your dog has been exposed? Hammond said you’ll see symptoms within just a few minutes of exposure.

“Sometimes there are minor signs, such as skin or eye irritation. But it can quickly progress to very major signs, including vomiting, diarrhea, lethargy, and potentially liver failure,” she said. “It can cause some neurological signs, like ataxia or seizures, where the dog may go into shock and die.”

Because the onset of symptoms can be so fast, Hammond said, getting your dog emergency care immediately is vital. “Tomorrow might be too late,” she said.

“If you suspect your dog has been exposed, rinse them off and seek vet attention right away. There’s no antidote or reversal agent,” said Hammond. “If they received a toxic enough dose, some dogs will die no matter what we do, which is really scary.”

Hammond said it’s difficult to tell if a dog has been exposed to blue-green algae because there’s no rapid diagnostic test. Veterinarians can test for liver function, or, if a dog has respiratory symptoms, may use a chest X-ray or ultrasound.

If there’s a silver lining in all this, it’s that blue-green algae exposure is not common. A 2013 study found 368 documented cases of dogs who died from toxic blue-green algae between the 1920s and 2012.

Hammond said she had not seen any confirmed cases at Tufts VETS, though two suspected cases recently came in. Luckily, the dogs’ physical exams and lab work came back clear.